Should Bill Barr be Allowed to Force Out Geoffrey Berman?   The Serious You: Politics

Should Bill Barr be Allowed to Force Out Geoffrey Berman? 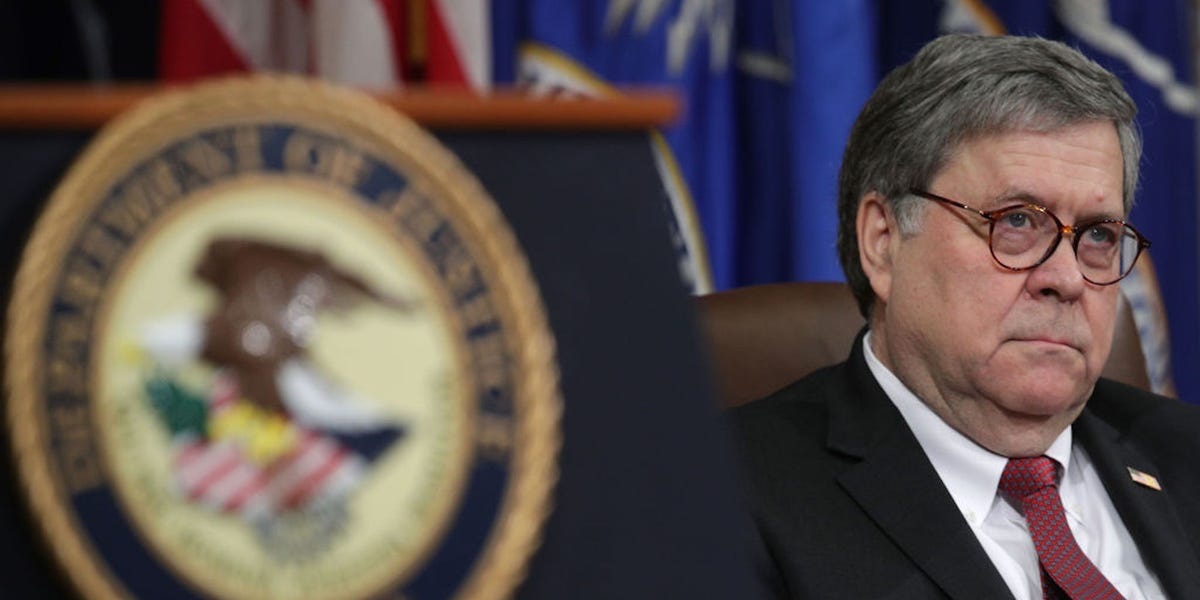 Manhattan US attorney says he has 'no intention' of resigning after AG Barr tried to force him out, adds that investigations will continue 'without fear or favor'

The SDNY is conducting multiple investigations into Trump associates including his personal lawyer, Rudy Giuliani.

It's a moot point.  Trump fired him and will replace him with a loyalist to Trump, not to the laws of the nation.

0
ReplyToggle Dropdown
Msg 4 of 7 to MerlinsDadMerlinsDad
In reply toRe: msg 3

That is an opinion.  There is no indication a new person to that position would not follow the law.  We don’t even know who it would be.

0
ReplyToggle Dropdown
Msg 5 of 7 to Showtalkshowtalk
In reply toRe: msg 4

For the time being, it's his deputy.

showtalk says: "There is no indication a new person to that position would not follow the law"

Let's say that given Barr's willingness to twist the Justice Department to support Trump's authoritarian leanings, I don't have much confidence in any designated Barr/Trump loyalist.

0
ReplyToggle Dropdown
Msg 6 of 7 to MerlinsDadMerlinsDad
In reply toRe: msg 5

I have seen Barr speak several times and he judgement at those times seemed sound.  He gave great detail about his decisions which is more than most do.

0
ReplyToggle Dropdown
Msg 7 of 7 to Showtalkshowtalk
In reply toRe: msg 6

There's no question about Barr's intelligence.  Trump appointed him, however, because of his political beliefs.

I've done a fair amount of reading about Barr over the past few days.  I even included a quotation about his authoritarianism and belief in an imperial presidency in another thread.  I don't remember which one.  I wish I could find it; It was appropriate to your question.  I will use this very recent article [June 21] to respond.  It, too, tells about Barr's efforts to use the Justice Department to support Trump's political ambitions and authoritarianism.  There's been a lot written about Barr's protecting Trump at great cost to our judicial system.  The firing of Berman is just the latest example.

Since taking office, Barr has repeatedly intervened to protect Trump. In addition to the behavior already mentioned, we might identify his attempt to protect Trump’s tax records from disclosure, or the way he distorted the true contents of the Mueller report. Barr’s actions are more like those of a consigliere to Don Trump than those of an attorney general of the United States, working for the American people.

Even that characterization is too kind to Barr. The attorney general’s apparent goal is to turn the Department of Justice into an arm of the president’s personal interests. He seems to have no regard for the department’s independence, and is doing long-term damage to the fabric of American justice.

Given the authoritarian structure of what Barr is attempting to achieve—preserving the forms of liberty while destroying their substantive content—we might call this the Orbánification of the American system of governance. Like strongmen everywhere, Barr (and Trump) seek to exalt their interests over those of the nation. And this latest effort—seemingly to short-circuit the ongoing criminal investigation of Trump’s affiliates and associates—is only the most recent evidence [bolding mine --MD].  https://www.theatlantic.com/ideas/archive/2020/06/why-bill-barr-got-rid-geoffrey-berman/613339/

Democracy has much to fear from the Barr-Trump team and their authoritarianism.  Here's another very good article giving some history about Barr, his beliefs and his actions.  https://www.newyorker.com/magazine/2020/01/20/william-barr-trumps-sword-and-shield