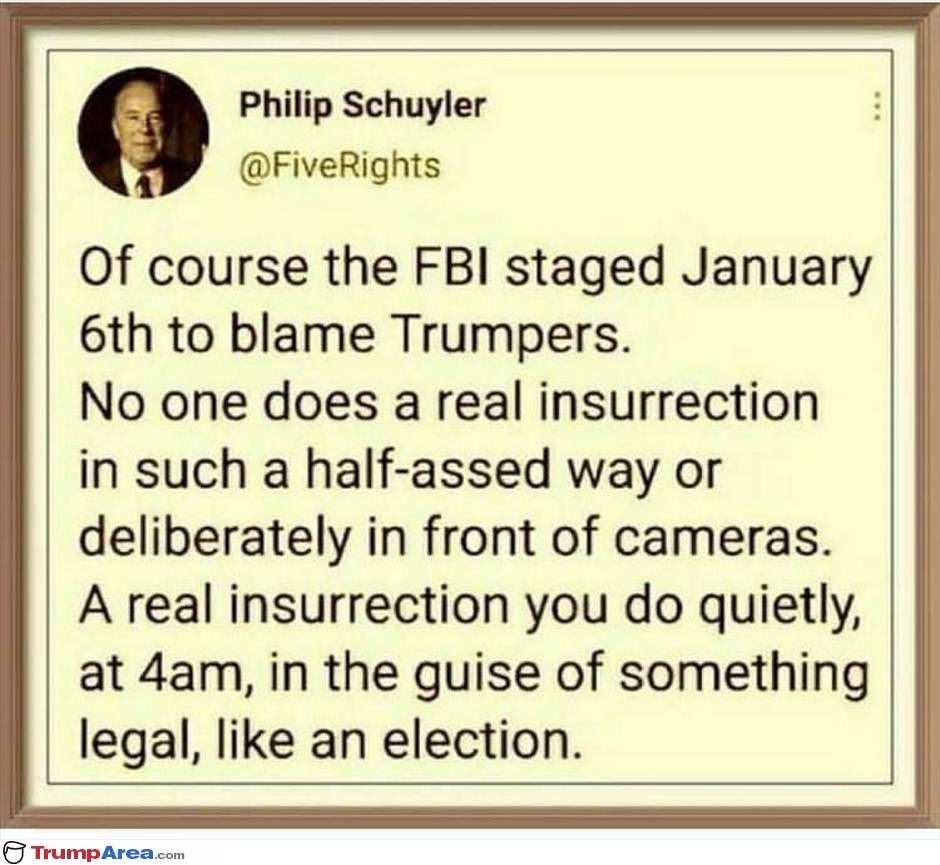 Funny but so sad.

0
ReplyToggle Dropdown
Msg 3 of 29 to Showtalkshowtalk
In reply toRe: msg 2

Actually, I don't find it funny at all... just sad.

Were it funny, I would have put it in the Humor folder.

LOL..well no one can call these guys genius.   It was an insurrection and a trial at overturning an election.  Our democracy held this time -- but what about the next time those on the right are not happy with an election outcome.  Just overturn it and say -- not what we wanted?

0
ReplyToggle Dropdown
Msg 5 of 29 to PAIndyladyPAIndylady
In reply toRe: msg 4

The left actually started it with the hanging chads 20 years ago. Then Hillary claiming Trump did not win in 2016, and Stacey Abrams refusing to concede.  It’s alright for them to do it but not for their opponents.

0
ReplyToggle Dropdown
Msg 6 of 29 to PAIndyladyPAIndylady
In reply toRe: msg 4

It was an insurrection and a trial at overturning an election.

You might better watch your step... but not because of me... because the FBI confirmed there was no insurrection so they may be watching you for spreading conspiracy lies.

FBI confirms there was no insurrection on Jan. 6

FBI confirms there was no insurrection on Jan. 6 (msn.com)

0
ReplyToggle Dropdown
Msg 7 of 29 to Showtalkshowtalk
In reply toRe: msg 5

The Hillary Clinton story just isn't true.  I saw her concession speech to Trump; and watched her make another speech the next day.  Dems/liberals/Indys all -- to our dismay -- conceded that Trump one.  There was no storming the capitol,  no rallies two years later talking about a  "steal,"  Time for Republicans/conservatives to get over it and pick a good candidate for 2024 and for the mid-terms in 2022.  I know in PA there are two Republican candidates that are not -- so far -- doing well in polls.  With four months to go-- things had better look up in PA if Republicans want to maintain the seat being held by Toomey.

Never heard about Stacey Abrams not giving a concession speech...I'll have to look that one up on line - Google or Bing.

0
ReplyToggle Dropdown
Msg 8 of 29 to PAIndyladyPAIndylady
In reply toRe: msg 7

Actually it is. Hillary still talks about the stolen election.

0
ReplyToggle Dropdown
Msg 9 of 29 to PAIndyladyPAIndylady
In reply toRe: msg 7

The Hillary Clinton story just isn't true.  I saw her concession speech to Trump; and watched her make another speech the next day.  Dems/liberals/Indys all -- to our dismay -- conceded that Trump one.

I've watched Hillary speak on numerous instances... and each and every time since she was 27... she has continued to lie, lie, lie and lie again.

She has lied so much I don't think she even knows the truth.

Did you see her New York 2022 Democrat Convention speech? It too was just jam packed full of lie after lie after lie!

She said Trump colluded with Russia. We all now know that she was the one who created that hoax... but yet she still denies that.

Unless people believe her no matter what she says.