Come in - please park car outside

I bought a little bag of air today

Would you ever eat candy that was onc...

Have you gotten COVID?

Change Vote
They are doing their job
They have a vendetta against Trump
This is part of the Jan6 investigation and legitimate
This is a violation of his rights and the constitution
1 and 3
2 and 4
Other
VoteView Results
0
ReplyToggle Dropdown
Msg 2 of 298
In reply toRe: msg 1 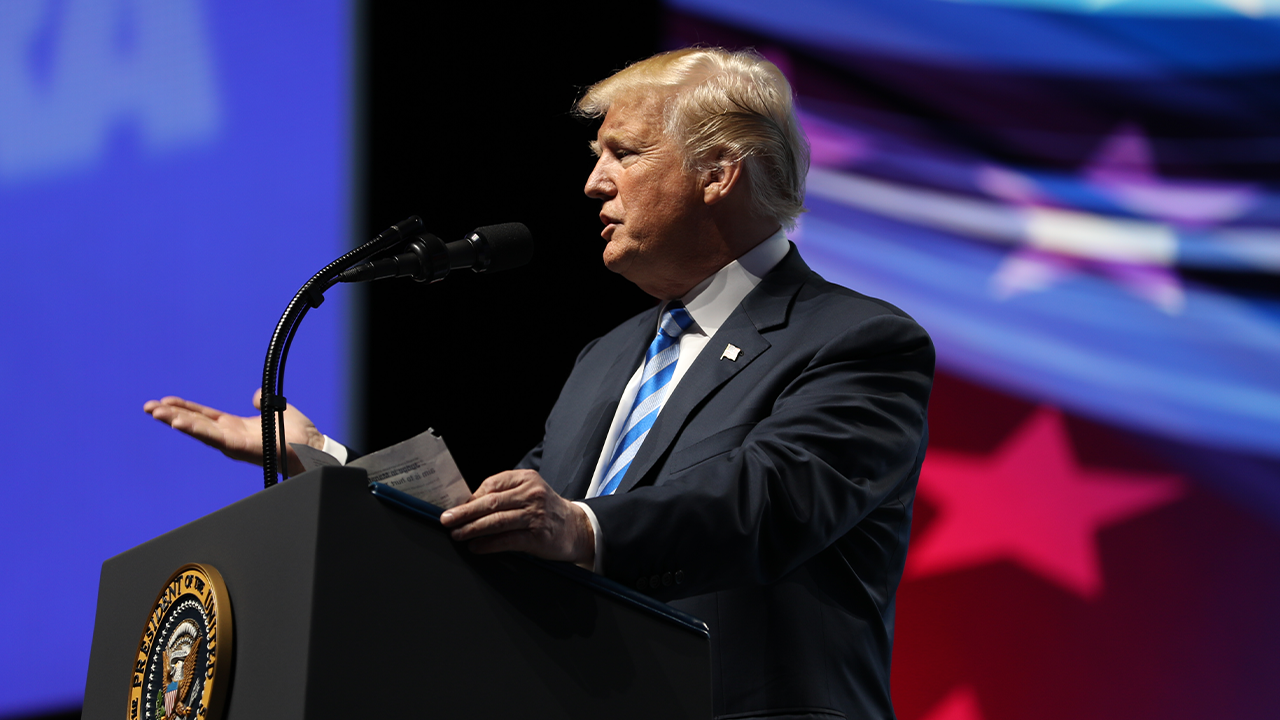 Former President Trump on Monday issued a statement on the FBI raid of his Mar-A-Lago home in Palm Beach, Florida, calling it "political persecution."

I’m not going to comment on this as others have far more knowledge than I do.  Mark Levin has a lot to say.

This happened a week ago. Was today retaliation? From Just the News: The conservative watchdog Judicial Watch has sued the Justice Department to compel the release of "smoking gun" documents former President Donald Trump declassified and ordered release that detail misconduct in the FBI's discredited Russia collusion investigation. The Freedom of Information Act lawsuit was filed quietly in federal court on Aug. 1 [...]

When Trump says "under siege"... he means it... he doesn't lie, doesn't squander with words.

For those not familiar with the term, here is what Merriam Webster defines as "siege":

Prosecutorial misconduct is what Trump called it.

It's just a pathetic witch hunt as they have nothing to remove Trump from running in the 2024 election so this was probably their last effort to attempt to find something.

He followed all the requests legally and yet the Democrats still send the FBI to unlawfully raid him.

Does one party of Congress have the judicial authority to issue an FBI raid on anybody? Least of all, a previous sitting POTUS? I think not.

The judicial branch is not and should not be controlled by Congress... the legislative branch!

This is a gross outrageous overreach of powers Congress DOES NOT HAVE!!!

0
ReplyToggle Dropdown
Msg 8 of 298 to Showtalkshowtalk
In reply toRe: msg 5

>>>The documents that Trump declassified never saw the light of day, even though they were lawfully declassified by Trump and the DOJ was instructed by the president through Meadows to expeditiously release them after redacting private information as necessary.<<<

Perhaps those are the documents that the FBI wanted to retrieve from Trump to hide their own collusion?

0
ReplyToggle Dropdown
Msg 9 of 298 to Showtalkshowtalk
In reply toRe: msg 1 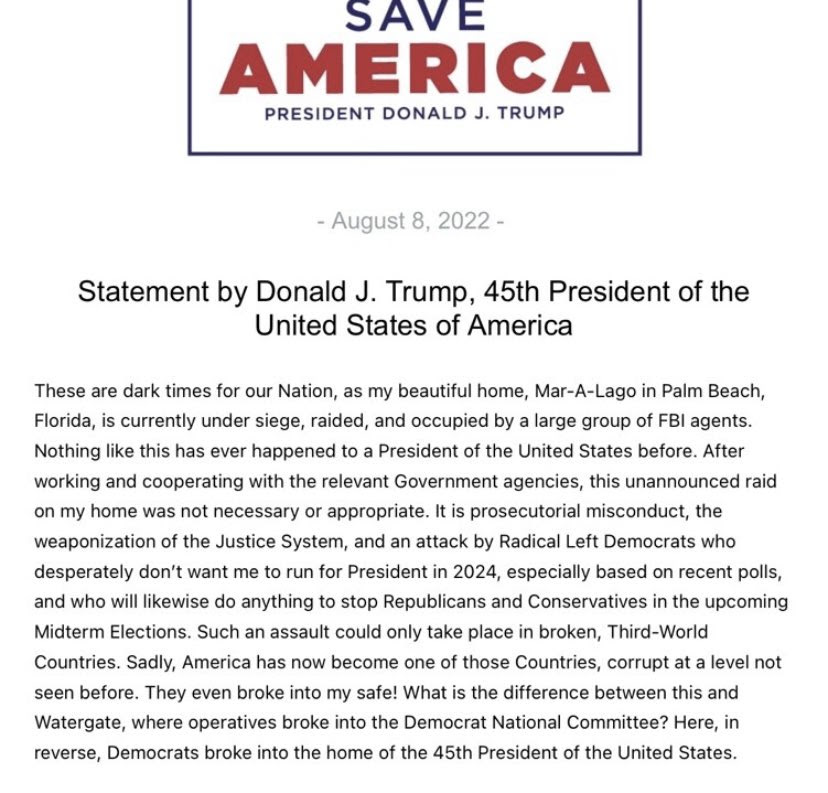 Bongino Blasts the FBI Raid on Trump, 'This Is Some Third-World Bulls**t'

We’ve been reporting on the politicization of the FBI under Joe Biden including in terms of the Hunter Biden case as well as domestic extremism matters.
But it just reached a whole new level — banana republic level — on Monday when President Donald Trump reported that a large group of FBI agents was raiding his Mar-a-Lago home in Florida. Trump was not there, he was in New York.
“These are dark times for our Nation, as my beautiful home, Mar-a-Lago in Palm Beach, Florida, is currently under siege, raided, and occupied by a large group of FBI agents,” Trump explained in a statement. “Nothing like this has ever happened to a President of the United States before.”
“They even broke into my safe!” Trump wrote. “What is the difference between this and Watergate, where operatives broke into the Democrat National Committee? Here, in reverse, Democrats broke into the home of the 45th President of the United States.”
This is extremely concerning when the Democrats have been going to all kinds of levels to try to prevent Trump from running again. Conservative pundit Dan Bongino was on Jesse Waters’s show just after the news broke. First, Jesse Waters went off on what a seriously dangerous thing this was, reading part of what Trump said in his statement.
Then Bongino let loose with a lot of the same thoughts that the rest of us were having right now over this FBI action. “This is some third-world bulls**t, right here,” Bongino said.
He wasn’t holding back. He said Hillary Clinton had paid foreign agents and promoted a false Russia collusion fiction that occupied the country for four years.
“What’s she doing right now,” Bongino said. “Getting a manicure in freaking Chappaqua!”
He then pointed out how Hunter Biden had sex and done crack on video, yet he’s hanging out at his mansion in Malibu. The management of the FBI has now shredded any sliver of credibility they had left, Bongino declared. “No one will take them seriously from this point on,” he said. He added that you cannot tell him we “still live in a constitutional republic and not the freaking third world” when there’s no action against Hillary Clinton, people lying under oath repeatedly, and Hunter Biden but now you have this kind of action.
“Where are the federal agents? They’re not in Malibu. They’re not in Chappaqua. They’re in Mar-a-Lago…This is some third-world garbage.”
Bongino then said, there wasn’t a question anymore, everyone has to get out and vote. “Republicans may not be the solution to your problems,” he said. “But Democrats are certainly the cause of all your problems right now. If there was ever a clarion call to remove your ass from the seat and go vote in 2022, this is it.”
There has to be a massive housecleaning. “Please, God, I’m begging you to vote in 2022 or you may not recognize this place afterward.”
It’s hard to say it better than that.

Bongino Blasts the FBI Raid on Trump, 'This Is Some Third-World Bulls**t' – RedState