They never seem to think things through before they protest!!! 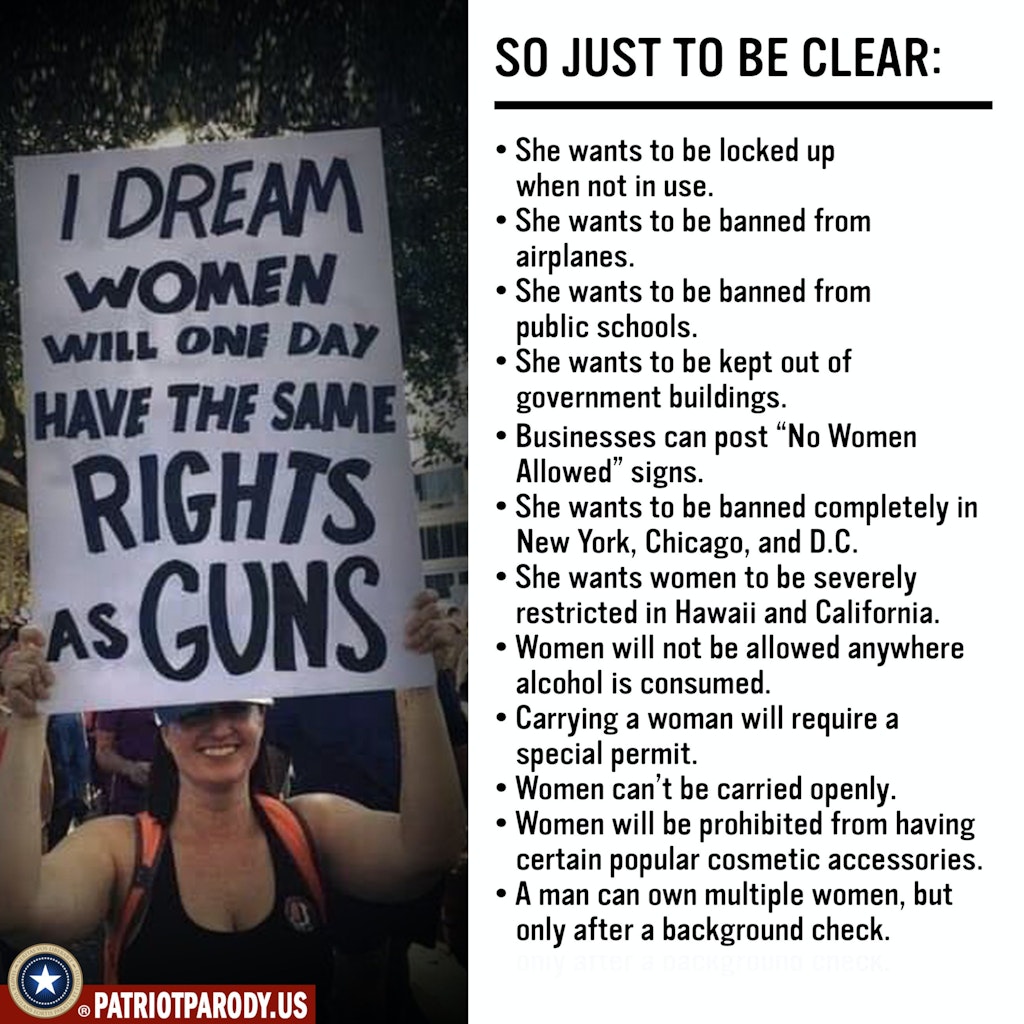 Anytime a woman on the left seeks to make a point about abortion or anything else or take a shot at the Second Amendment, if not both, she makes a comment about how she wishes she had as many rights as a gun.

Of course, anyone who understands the gun laws in this country knows how idiotic a statement like this actually is.

Well, over at National Review, Charles Hilu paints a picture of what it would be like if guns and women were treated similarly.

Men would need a permit to bring women outside the home.
While Bruen made it unconstitutional for the government to require people to demonstrate a need to carry guns beyond their doorstep, most states in the union require gun-owners to possess concealed-carry permits. The requirements for these permits vary from state to state, but most require applicants to be a minimum age (usually 18 or 21) and take a class on firearm safety. Putting such regulations on women going beyond their doorstep would seem more fitting for a country like Afghanistan than for the United States.

Women would not be allowed to attend school.
We often hear about gun-free zones after school shootings. The Gun-Free School Zones Act of 1990 criminalizes the possession or discharge of a firearm in a school zone. If we were to treat women like guns, K–12 schools would become “woman-free zones.” Similarly there are many college campuses that do not allow students to carry on campus. There were times in our country’s history when men and women were not allowed to attend school together, and those were not good times. Progressives describe the decision in Dobbs as “going backwards,” but that would be more apt if we treated women the same as guns.

Hilu also notes that women could be bought or sold, since guns are treated as property and if women truly wanted to be treated like guns, they, too, would be property as well.

The truth is that women really don’t want any such thing. No one should. It’s awful.

Now, Hilu is making a case about abortion, which I’m not interested in discussing here. What I am interested in, however, is trying to dispel the myth that leads to these kinds of inane comments.

You see, when people make this claim, it’s because they’ve been told that guns are easy to access and virtually unregulated in the United States.

Now, compared to most of the world, that certainly seems to be the case, but only comparatively. There’s plenty of regulation of firearms in this country, as noted previously. Women and their uteruses — another version of this involves comparing their reproductive organs to guns — aren’t regulated in any such way.

If you want to make a case about abortion, then do it. But don’t do so by pretending that the Second Amendment provides a non-sentient tool with rights far, far greater than you, as women, actually possess.

Second Amendment rights are already heavily regulated, far beyond where most seem to think. I refuse to allow the misconception to exist unchallenged.

0
ReplyToggle Dropdown
Msg 3 of 6 to EdGlazeEdGlaze
In reply toRe: msg 2

She was making a point while showing her ignorance.

0
ReplyToggle Dropdown
Msg 5 of 6 to Showtalkshowtalk
In reply toRe: msg 4

She was attempting to make a point but without thinking that point she thought she was making through enough for it to really mean anything.

It did t mean a thing. Typical response of emotions over logic.