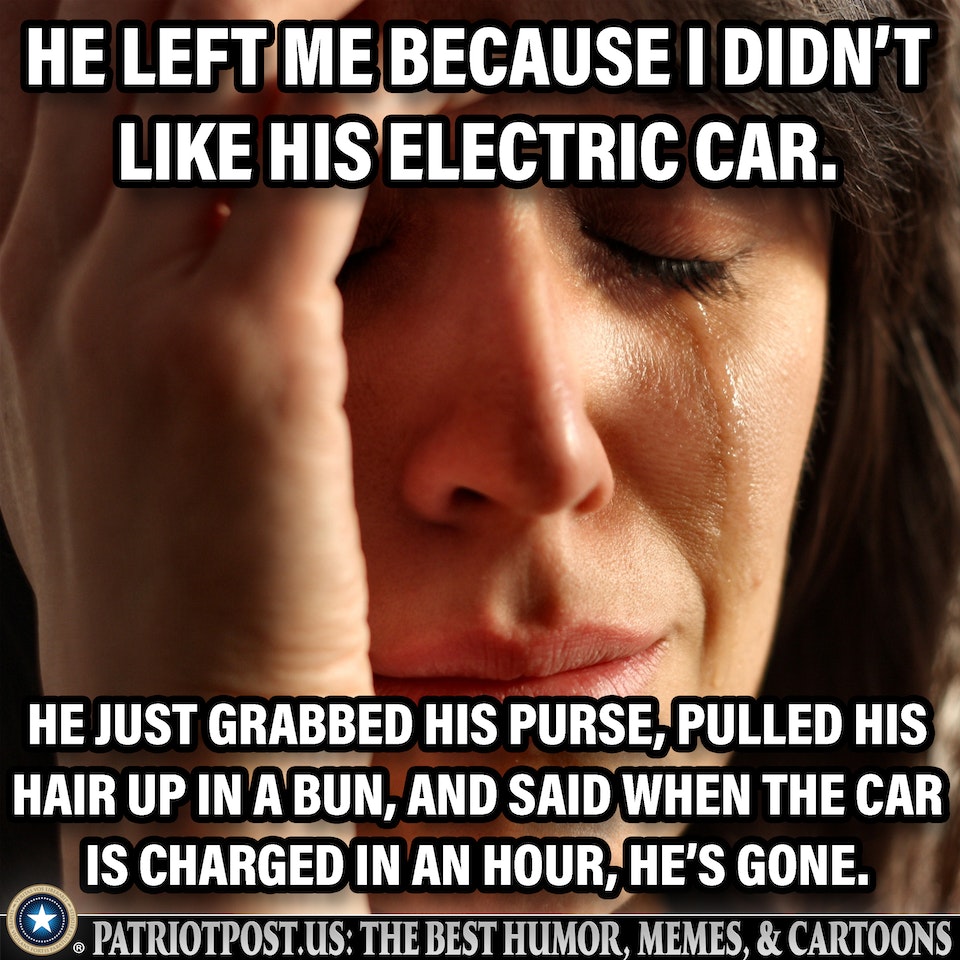 Reminds me of an electric car that had to call AAA when their battery ran down about 11 miles from Kermit, TX and 10 miles from Jal NM. They towed a trailer with a big diesel generator mounted on it with a variety of car charging connectors, started that bad boy up, and charged the car on the side of the road. It was delicious to smell that distinct odor of diesel exhaust, which was producing about as much horsepower as a fully loaded 18 wheeler struggling up a mountainside.

I kind of hope the generator had "red diesel" in the tank.

I would imagine that recharging an EV with a diesel engine would probably emit more carbon dioxide than running a regular gas drinking car instead of an EV.

Oh, definitely. There is the energy conversion loss turning diesel into heat to run the engine to spin the generator to make electricity to charge the car. All that hot exhaust going up the stack, all the hot air coming off the radiator, and the I^2*R heat in the generator windings, all are energy loss that doesn't go to turn the electric car's wheels.

Plus the battery itself is not 100% efficient between charge and discharge.

So that shows up as the battery getting (hopefully just) warm. So you have a big "income" column entry of joules of energy rather than dollars, which is the chemical energy of the diesel fuel.

Then you have a bunch of debits,  or "exchange fees" to use a monetary accounting analogy to analyze the thermodynamics and physical chemistry of what is going on.

There's of course combustion energy. A bunch of it goes to expand the fuel / air mix and push the pistons down, but there's additional debits - the heat that goes thru the exhaust valve and ultimately up the stack, the other heat that goes into the antifreeze and to the radiator.

So the balance of energy from that conversion transaction is available to turn the crankshaft. There is a small "tax" of friction and viscous turbulent movement of the oil in the crankcase, and some frictional heating of the rod and main bearings.

The energy that is left in the "bank account balance" makes it to the attached generator. A little more is lost in the generator bearings and in the excitation coil, which produces the magnetic field, mostly as a few more watts of I^2*R losses to get the roughly 1-2 Tesla magnetic field strength that goes to the generator poles and slices through the stator windings.

There is some energy loss in the eddy currents along the stator and rotor laminates, which ends up as a little more heat. A modern generator keeps this effect as low as practical but it's non-zero. So it's like yet another tax bite taken out of the energy that makes it that far.

Then there are air gap losses. These are fairly small but all of it adds up. Then there's winding losses, as the copper isn't a perfect conductor. So as the spinning magnetic field pushes electrons around, they have a little bit of resistance, and of course resistance means more energy dissipated as heat.

Then somewhere, either in the car or in the charger, there's a hefty bridge rectifier. Silicon diodes typically have about a 0.7 volt drop across the forward direction junction when they do conduct. So each will dissipate 0.7*A watts. Let's assume we're pumping 100 amps of current into the car. So the bridge will dissipate at least 70 watts converting it to DC to get to the battery. That's why a heavy current bridge has a heat sink bonded to the body.

Next stage is the transistors that do the pulse width modulation to match the electric voltage to the battery and adjust the current to feed an optimal charge to the battery. These are less than 100% efficient. So there's some more heat sinks to keep them cool.

In that there's some hefty coils, some big capacitors, and a Schottky diode called a catch diode that handles the inductive kick between individual pulses from the transistor arrays.

There's also a little more wire losses, although at this stage it's fairly negligible. Finally, electrons course into the negative battery electrode and drive some chemical reactions in reverse, turning the lithium compound back into porous lithium and restoring the electrolyte ion balance, a fancy way to say the battery gets charged.

Each of these electrochemical reactions are not 100% efficient. So your electrolyte and electrodes heat up.

The process continues until the chemical reaction is fully reversed, and thus electrolyte and electrode materials are ready to react and release the electrons again once a load is applied.

I'd guess that it's somewhere between 50% and 70% of the energy in the diesel ultimately arrives as electrochemical energy of a fully charged battery. The rest just heats up the surrounding air, and a whole lot of carbon dioxide, carbon monoxide, and water vapor from the burning diesel, and very fine carbon particles and such, go into the atmosphere.

I just love the way you convert the mechanical process to a monetary value in the following layman terms:

big "income" column entry of joules of energy rather than dollars
a bunch of debits,  or "exchange fees" to use a monetary accounting analogy to analyze the thermodynamics and physical chemistry of what is going on.
but there's additional debits - the heat that goes thru the exhaust valve and ultimately up the stack, the other heat that goes into the antifreeze and to the radiator.
a small "tax" of friction and viscous turbulent movement of the oil in the crankcase, and some frictional heating of the rod and main bearings.
energy that is left in the "bank account balance" makes it to the attached generator.
it's like yet another tax bite taken out of the energy that makes it that far.

Yep. An engineering professor teaching thermodynamics said that balancing the equations is very much like accounting - all the energy inputs and outputs have to balance, since energy can't really be created or destroyed. It simply can change form from potential energy - such as the water in a high mountain lake - into kinetic energy such as that water flowing down a penstock and through a hydroelectric turbine.

Or chemical energy in the form of diesel fuel or natural gas, combining with oxygen to produce heat as a byproduct of the combustion reaction, then that heat boiling water, then making steam, then spinning a turbine, which turns a generator, which pumps power to a step-up transformer which then feeds power into the grid, and all the reverse processes for it to finally come out as 120 volt AC into your waffle iron, light bulb, or hair dryer where it is converted back to heat again.

This is why resistance heat is the worst way to heat a building. It's a "high form" or "low entropy" energy in the form of electricity that is now just being converted back into a high entropy energy of plain old heat, with a lot of efficiency losses along the way. It's best to directly burn the fuel where you need the heat, and save the electricity for where it works best - transmitting power to an electric motor, or these days, convert electrical energy directly into high flux photon emission by an LED bulb.

Japan is really moving forward with hydrogen energy, but I'll post about that in a new thread.

Or this. Isn’t it just nuclear energy, which they also hate?

Controlled nuclear hydrogen fusion is something that could give us a soft landing from fossil fuel, precisely because the byproducts are helium in the form of intense alpha radiation. I think that the intense magnetic field needed to confine the ultra-hot plasma has an effect of generating quite a high voltage that can be picked off as power, from the kinetic energy of the helium nuclei, but then it's been about 40 years since I studied that facet of nuclear physics, and my main focus was on how to protect from the effects of nuclear weapon detonation.