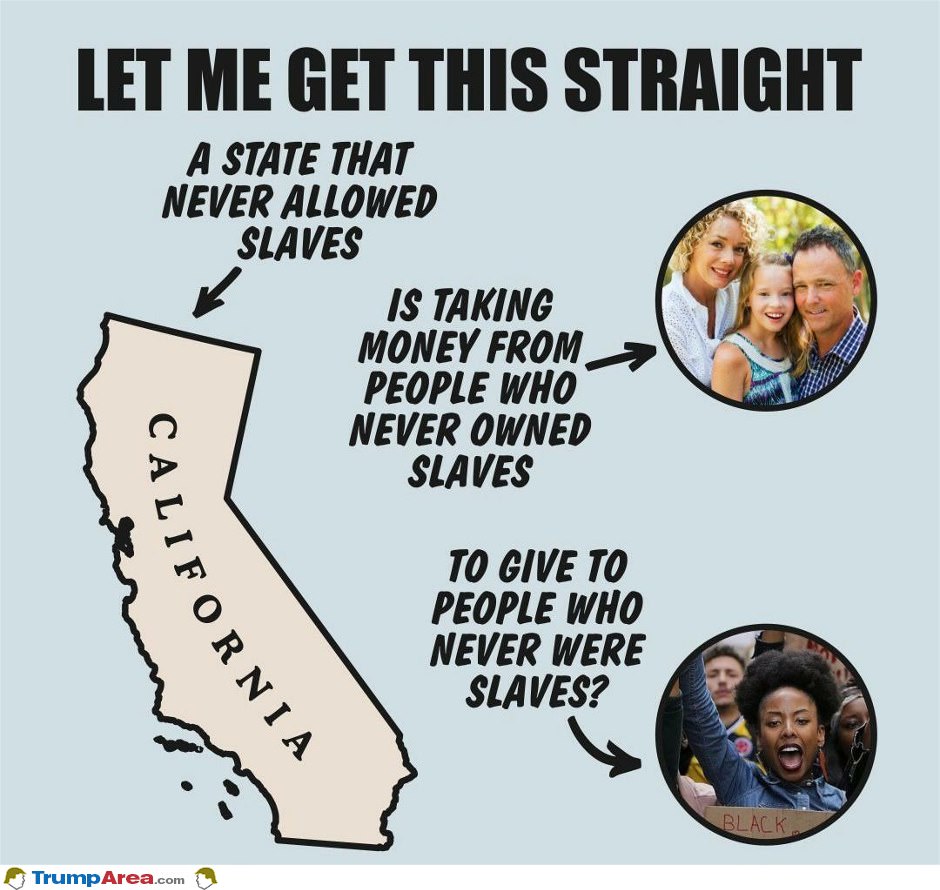 Some land was taken a long time ago and people were not paid for it.  But it was very rare and they have tried to make good in that by giving the land back.  The rest seems inappropriate.

Apparently its not about slavery but racism and lack of opportunities.  The people eligible are actually small in number.

0
ReplyToggle Dropdown
Msg 4 of 17 to Showtalkshowtalk
In reply toRe: msg 3

California, a Free State Since 1850, May Pay $233k in Reparations per Slavery Descendant

The State of California could be facing $233,000 in reparations for each black resident who qualifies as a descendant of African American slaves, according to a consulting report prepared for a special state panel.
As Breitbart News has been reporting since 2020, the Golden State is considering reparations under a law signed that year by Gov. Gavin Newsom (D) — though California entered the Union in 1850 as a free state:
The panel — which is not representative of the state, but composed primarily of black members — voted 5-4 to limit reparations to descendants of slavery, and issued recommendations that include separate black schools.
…
There is broad public support in California for restoring property unjustly taken from black owners, as in the case of Bruce’s Beach, which has been restored to the heirs of a the couple from whom it was taken in the 1920.
However, there is limited support for reparations in a general sense.
Beyond slavery, the panel is considering payments to compensate for a variety of allegedly discriminatory practices, including housing discrimination and “mass incarceration.”
Fox News reported on Saturday:
The California Reparations Task Force’s five member economic consultant team reported that under the initiative, qualifying Black residents in the state could qualify for $223,200 per person.
The task force’s consultant team drew its ballpark number by examining gaps in housing and speculating the approximate amount of wealth lost between 1933 and 1977. The state panel says that Black Californians lost $5,074 per year under previous housing policies.
It is unclear whether the legislature will accept the proposals of the panel, which has a merely advisory role.

California, a Free State Since 1850, May Pay $233k in Reparations per Slavery Descendant (breitbart.com)

They were descendants of slaves in other states, so why don’t the southern states pay them?

0
ReplyToggle Dropdown
Msg 6 of 17 to Showtalkshowtalk
In reply toRe: msg 5

They were descendants of slaves in other states, so why don’t the southern states pay them?

Because they're descendants... not those who were kept in slavery nor their children.

They're the grandchildren or great-grandchildren of slaves and repartitions were paid way back shortly after slavery was abolished.

Why is California even attempting to pay repartitions in 2022?

0
ReplyToggle Dropdown
Msg 8 of 17 to Showtalkshowtalk
In reply toRe: msg 7

I think reparations such as this sets a terrible precedent.

0
ReplyToggle Dropdown
Msg 9 of 17 to Showtalkshowtalk
In reply toRe: msg 7

It only stokes animosity of the races today by making such a foolish offer and doesn't rectify anything.

I agree. Where will it stop? Atrocities in California were against native Americans, not Blacks.  However, those groups have been diluted due to intermarriage far more than Blacks, so it would be almost impossible to trace lineage back, even if they decided to do that.