Can we beat COVID 19 like New Zealand did?   The Newsy You: News of Today

0
ReplyToggle Dropdown
Msg 7 of 41 to Showtalkshowtalk
In reply toRe: msg 6

Did you hover the mouse over each picture to see what the <alt> text says? Those are even funnier sometimes.

Here's one we electronics geeks thought was hilarious: 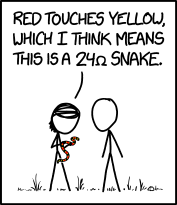 No, not all of them.

0
ReplyToggle Dropdown
Msg 9 of 41 to Showtalkshowtalk
In reply toRe: msg 8

Holding a coral snake - the only highly neurotoxic venomous snake found in the Continental United States, as opposed to the other 3 venomous snakes which are primarily hemotoxic - the copperhead, the water moccasin, and the various rattlesnake species. Looking at the snake trying to identify it by its color bands.

Red touches yellow which I think means this is a 24 ohm snake.

The resistor color code consists of 3 to 5 bands, which indicate the resistance value and its tolerance, or level of precision of manufacture.

First and 2nd bands are always numerical. For a 3 or 4 band resistor, the 3rd band is the exponent, or number of zeroes to add after the first 2 digits. The 4th band is the tolerance. An absent 4th band (common in WW2 through early 60s) indicates 20% tolerance, so a 100 ohm resistor could be between 80 and 120 ohms. A silver 4th band indicates 10%, which means a 100 ohm resistor could actually range from 90 to 110 ohms. A gold band indicates 5%, or 95 to 105 ohm value range with any randomly chosen resistor out of the lot.

The numerical values are:

The exponent band (3rd or 4th for high precision) uses the same numerical to color but indicates how many 0s to add after the first 2 or 3 digits. So essentially a fully implemented resistor color code is a crude floating point representation.

Gold and silver can also be used for the exponent band to indicate that you move the decimal place to the left, such as for a 2.4 ohm resistor, or even a 0.24 ohm resistor.

What is a very low value resistor used for, you might ask from a non-electronics trained perspective? It is often used for precision current sensing by placing it in series in a power supply line. The actual voltage drop is too low to adversely affect the circuit being measured, but enough to amplify and feed to instrumentation.

This trick is implemented in all modern computers, smart phones, etc. built into the silicon itself, so the phone can measure how much current is flowing in or out of the battery and thus estimate how much juice is left before it goes dead, in addition to monitoring battery voltage. Monitoring current frequently and adding or subtracting subsequent samples to gauge the state of charge or discharge of the battery is called "coulomb counting".

In older equipment, a very sensitive meter movement is connected across the low value precision resistor, which is also known as a meter shut resistor used in that manner.

For measuring really heavy current, such as, say, the starter motor current on a car while cranking the engine, the "resistor" is actually a metal bar, or even a piece of precisely calibrated length wire of an exact diameter and alloy composition. This might be on the order of 1/10,000th of an ohm so it takes 1000 amperes to cause a voltage drop of only 1/10 of a volt. Since that might need to measure 250 amperes or so on a typical car starter cranking, this is a fairly reasonable resistance.

Then the meter picks off the exact voltage drop across the copper bar with some small wires soldered to each end, while there are big huge bolts and lugs that connect one of the battery leads through the bar / resistor so there is a solid connection that won't heat up.

Also you might even silver plate the mating surfaces of huge wire lugs to reduce accidentally introduced extra resistance that could throw off the readings.

Then all of that is encapsulated so moisture and stuff can't corrode it and affect the resistance.

I've built these things before, to do stuff like check the current on an arc welder, or to insert in the electric power main wiring to check the load on the whole house from air conditioners and water heaters to water wells and other large consumers of power, then written programs to coulomb count and get an early heads-up of a very large electric bill. It's also handy to find energy hogs in a house.

For true power rather than reactive current, there's other circuitry to build to monitor phase angle between current and voltage and do a whole bunch of math about 120 times per second. This is how smart electric meters work, by the way.

If you take one of those apart and look inside, there's these two big heavy metal bars and some small wires coming off of each end that then go to a magic circuit board. The meter steals a tiny amount of power (like a watch battery level of power) to run the computer and all of its communications hardware, and then calculates true power, transmits that wirelessly to a repeater nearby, and that goes to the power company's servers, that then generate a bill without human intervention.

I got lost when you switched from snake coloring to electronics.

0
ReplyToggle Dropdown
Msg 11 of 41 to Showtalkshowtalk
In reply toRe: msg 10

I just packed up some resistors that are red, red, silver, a slight gap, and gold banded. The slight gap is to be certain you're not reading it from the wrong end. They are 0.22 ohm.

They are actually half watt in a quarter watt form factor because of a ceramic substrate and coating so they can get a lot hotter than a typical carbon composition type.

They are really used as a slow blow fuse for a normal short circuit kind of situation, but in a lightning strike event, they actually explode quite nicely, and allow less destructive energy into the system, improving the odds that the circuit board is repairable.

And some experiments indicated they will blow faster than an actual fuse during a lightning or serious EMP event, giving the spark gap and MOV and transorb circuitry more time to short / clamp, and even thanks to a slight inductance due to how the resistor element is made, also slows down the rise time by enough nanoseconds to "flatten the curve" as it blows.

0
ReplyToggle Dropdown
Msg 13 of 41 to Showtalkshowtalk
In reply toRe: msg 12

Yeah, it's sad to see how some of those products aren't going to be built any more.

It would be sad.  But businesses go where the market directs them.

0
ReplyToggle Dropdown
Msg 15 of 41 to Showtalkshowtalk
In reply toRe: msg 1

22 states have the virus back on the upswing. Forget calling this the second wave. Experts are saying we never got out of the first wave. Autumn will probably smack the deniers  up  side the head like a 2 x 4.

Middle of the roaders too.