The dark side of today's leadership...

This guy really spells it out like it is

How well are you versed on the histor...

Restoring the Idea of Liberty in America

Have you received a Covid 19 booster shot?   The Healthy You: Health and Fitness Polls

Fortunately I got some extra test kits at Sam's before this latest kerfluffle, ,after having gotten exposed to Delta in August.

This at least means if I suspect having been exposed, I can miss the long lines and shortages although those tests have to be carefully rationed.

You need a lifter to bring things in for you.  I don’t know what I would do if I couldn’t carry 35 lb bags of dog food,

Our quick testing site was in an urgent care and it vanished.  I can’t find out what happened to it and no one is talking about it.  They were selling home Binax test kits for $7 apiece in boxes of 2 for $14, which are supposed to be good in the variant. They are sold out but online the price has jumped to over $20.

BinaxNow are only good for around 6 months then need to be replaced. 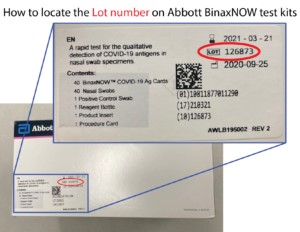 You can access the most information related to Abbott of BinaxNOW tests that have been authorized to have their expiration dates extended by accessing information directly from Abbott's website. Use the instructions to see the letter and listing of BinaxNOW™ COVID-19 Ag Card lots which qualify for this expiry extension. Please pay close attention to... Read More »

Someone else who uses the word kerfuffle!  I am right chuffed :-)

Our tester site is in Cardinal Stadiums parking lot.  Its so huge it would be interesting to see if they could close it down quickly.  I think there is or will be a second tester site in ASUs football stadium parking lot.

Ours was a small site.

0
ReplyToggle Dropdown
Msg 45 of 48 to Showtalkshowtalk
In reply toRe: msg 41

They don't have a tiny Dallas Semiconductor real time clock / calendar which can be programmed to self-destruct at some date / time in the future.

The rate at which the effectiveness of all sorts of meds and test reagents degrade tends to  be gradual, and the expiration dates are likely well into the less than 1% efficacy loss point.

So in a pinch, it's perfectly fine, when the alternative is nothing, to take an expired test, especially if the expiration date is nearer in the past than its purported shelf life.

Why? During the first Gulf War, the Army started doing a long term (30 years or so) test to actually measure whether "expired" medicines were really unsafe, or if the dates were more lawsuit-paranoia induced artificially short (most likely scenario).

It turned out after storing meds and such in a group of "time capsules", then subjecting everything to periodic sampling and laboratory testing to determine exactly how effective / ineffective the stuff is, years and decades after expiration, while stored at a range of temperatures, humidity, etc. which can affect degradation rates.

Here's what I suspect based on these results and others involving long term storage of stuff (as a survivalist I have always been VERY interested in this for obvious reasons - some point post-apocalypse, all stored supplies will have passed their expiration dates yet there will be illness / injuries where those can save one's life.)

Stuff degrades along a natural logarithmic curve that is very similar to voltage across a capacitor and resistor in parallel when the excitation voltage is removed. Radioactive decay follows a similar mathematical profile.

Essentially they set expiration dates very, very conservatively along that decay curve, probably well less than 5% of the elapsed time required to lose half the effectiveness. So the half-life can be estimated as, maybe 20x as long as the time between manufacture and expiration date.

So, a test kit made in July 2021 with an expiration of January 2022, most likely will be accurate enough to get believable readings a full decade out, around January 2032, and would reach maybe a significant number of false negatives and truly coin toss levels of accuracy around 2042.

By that time there should reasonably be replacement tests available. So it's just a huge waste of resources to throw things out at the stroke of midnight on the printed "expiration date".

If there's a shortage of tests and a bunch of them expired in January 2022,. I'd have no problem relying on them through January 2023. The amount of accuracy degradation would be negligible during that window.

Heck, I have some cough syrup that "expired" in 2014 and it seems to be just fine.

If I can get replacement i would not rely on old medications. I wouldn’t eat food that old, either.

0
ReplyToggle Dropdown
Msg 47 of 48 to Showtalkshowtalk
In reply toRe: msg 46

If I can get replacement

Yes This is to have options when a replacement is not available.