Pro V1s and Pro V1x on ebay at good prices

Why we love POTUS

Putin to the Rescue

The ratings from NBC's Sunday night game fell 16.1% from the ratings of the first 2019 Sunday game (and that game's ratings had fallen from the year before, too).

Now the ratings for the Monday night games falls 17.2%.

That's just the drop for the first game.

What was the drop for the second game?

Well, CNBC doesn't want to tell you. They're going to make you work out the math.

The second game between the Tennessee Titans and Denver Broncos registered 7.6 million viewers as the Titans won, 16-14.

The viewership was down from last year?s average of 13 million viewers for the first game in the Monday Night Football doubleheader that featured the Houston Texans and New Orleans Saints.

When I realized who The Steelers chose to honor on their helmets...click. Been a long time since I chose to not watch a Steeler game.

And yet another post about the NFL.  Watching bad.  Talking good?

Talking doesn't cost them money.  Not watching does. 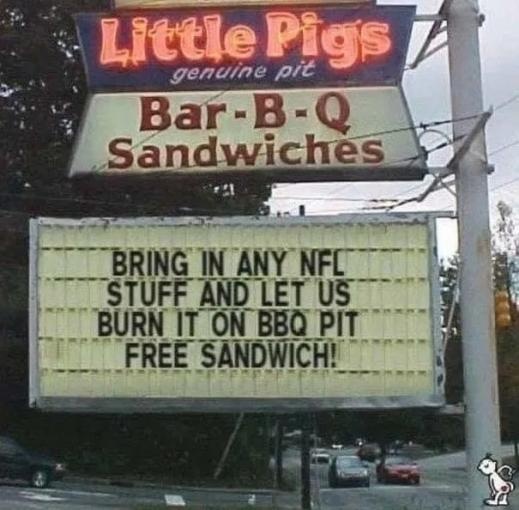 0
ReplyToggle Dropdown
Msg 7 of 7 to MikeJAMikeJA
In reply toRe: msg 6

SNF ratings continue to drop, down almost 20%.  And it’s not like the teams suck: Seattle v New England.

Whoever advised the NFL that turning their games into a showcase for leftist activism was a good idea, should be probably be declared non-essential.

NBC’s Sunday Night Football showcased two of the best franchises in the NFL over the last decade, despite that, the ratings crashed by nearly 20 percent.