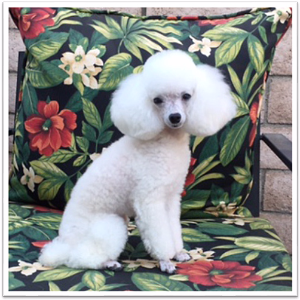 A fun, friendly, ad-free poodle forum, where we can discuss everything about being owned by a poodle. For anyone who loves toy, miniature, and standard poodles.

Puppy Area (not for sale)

We welcome you to Our Poodle Forum.

Please tell us a little about yourself and your poodle if you have one.

0
ReplyToggle Dropdown
Msg 2 of 19 to PennyCCPennyCC
In reply toRe: msg 1

What a great idea for a forum!!!  I have not had a pet or a poodle for many, many years and I sure miss it.  I know that all dogs can be funny and lovable but there is just something extra special about poodes.

I always was attracted to poodles.  When my mother was growing up she had a neighbor who was a dog handler for the USArmy.  By the time I came along and wanted a poodle he had retired and he and his wife were breeding and showing mini poodles, Dobermans and Schnausers.   They were very particular about the dogs they bred with theirs, taking into account the length of the leathers of the ears, the color of the coat, etc.  After meeting one dog we decided it would be a bad match for him to ome home with us.   We waited and went back and met his half brother.  The 2nd one we met sat on the couch on my pink skirt and then on it again all the way home.  Pink seemed to be his color.  He was well trained and we planned to show him but I got sick and the next thing we knew he was in charge as only a poodle could be.

When my dog died we asked the breeders  what we should do with his body.  They said some of their champions were at the humane society mausoleum.  We went there.  The next vacant spot was exactly 2 places below that of the national champion who had  been his father.

It really bothers me that their is so much breeding of dogs who have "papers".  Papers just mean that the breeder claims that the dog is 100% of the breed.  Nothing else.  To make things worse, dumb people are paying huge amounts of money for a "registered" dog.   I love dogs of all breeds but I have seen too many people spending small fortunes for dogs with problems caused by inbreeding.

1
ReplyToggle Dropdown
Msg 3 of 19 to kizmet1kizmet1
In reply toRe: msg 2

Welcome, Kizmet!  We are very glad to have you join our conversations.  I did not have a poodle for over 25 years because I was not careful of the type of breeder I selected for that sweet poodle many years ago who died so young.

But I did a better job of looking for a mini poodle this time around and am very happy with Dakota.

Your poodle must have been very secure in his doghood to have "pink" be his color.  Was he a black poodle?

0
ReplyToggle Dropdown
Msg 4 of 19 to PennyCCPennyCC
In reply toRe: msg 3

Thanks for the welcome. Sorry you had to see someone you love suffer.  It just isn't fair to dogs or the people they "own".

He was a brown.  His father was a black named "Black Magic".  His other ancestor was called Charlie Brown.  The breeders felt mixing the colors made them "richer".

1
ReplyToggle Dropdown
Msg 5 of 19 to kizmet1kizmet1
In reply toRe: msg 4

I think brown and pink go together great.

It was hard to watch my first poodle suffer, as you say, but it taught me valuable lessons on being more careful when picking out my next poodle.

0
ReplyToggle Dropdown
Msg 6 of 19 to PennyCCPennyCC
In reply toRe: msg 5

That is a hard lesson many go through all the time.  Many think going to a pet store is a good place to go but at least 3 people I've known ended up with very sick or deformed dogs that they got in one.

1
ReplyToggle Dropdown
Msg 7 of 19 to kizmet1kizmet1
In reply toRe: msg 2

Welcome! So happy to have you here!

0
ReplyToggle Dropdown
Msg 8 of 19 to N2Mischief1N2Mischief1
In reply toRe: msg 7

0
ReplyToggle Dropdown
Msg 9 of 19 to PennyCCPennyCC
In reply toRe: msg 1

Hello! I have an old girl...an almost 17 year old schnoodle. I attribute her age to hybrid vigor and a rascally playmate who is ginormous. LOL

Seriously, she is a sweetheart who has seen me through some major upheavals in life. She has the poodle intelligence, and the schnauzer stubborn streak!

1
ReplyToggle Dropdown
Msg 10 of 19 to ldyfingers1ldyfingers1
In reply toRe: msg 9

What is your girl's name? I would live to see a picture of her.