Getting off nicotine for good (for the good of my health)

For those who are struggling

Lubbercat is celebrating one year!

Freckled1968 is one year smoke free!

if you need help

Nicotine patches make me feel worse when I take them off???

I hope you are going to check out the vertigo.  and thank you for your prayers.........

I have read that she had surgery!  I will continue to pray for her healing.

I see a ENT this coming week. The ER Doc said often sinusitis can affect the ears and I have been given exercises to do for the crystals. Only the one episode that left me spinning….. lol

I will soon be going to Islamorado with my daughter, SIL and granddaughter. Have you ever been there?

Thank you and everyone else on here for the support.

I hope you get good news from your ENT.

I imagine my sense of smell didn't improve as much as most as I think it was always bad :) As a teenager I had good eyesight, it was measured frequently for baseball, and I had 20/10. My hearing was poor when it was measured in kindergarten and anytime afterwards.

I don't think there was any measurement for smell, but I remember not smelling things that friends or family would smell. I guess one sense makes up for another.

Rainy here, but not that bad.

Good morning all.  46 here this morn, some sun in the 60s here today.  Glad, was rainy all day yesterday.

Rain next two days also.  Haven't mowed our lawn yet, next door neighbor has.  He's lucky I and the

others cleaned up his lawn after the storm and again after he decided to cut the damaged tree down.

branches.  Maybe if the ground drys by late day will get ours mowed.

Kitty, glad the surgery went well.  My wife's niece is dying of Cancer, has been going for a few months

and now she's just on pain killers, no more treatment.  She doesn't really know my wife anymore.  She

keeps talking about my wife's sister and she doesn't have one.

stuff, still needs work.  The body and paint are being finished up now.  The engine is a 4 bolt mains, has

aluminum heads and multi-port fuel injection among other strengths.  Still 450 horsepower is much less

shorted to ground.  I replaced it but still have other repairs to make before it's up and running.  It's been

a long road with this amp, since January.  I've learned some from it.  The defective new part I should expect

after working electronics for decades but it still surprises me.  I still expect to see an old part that has given up,

besides the one I just replaced.

Susan, sorry to hear you have a medical problem.  They thought I might have those crystals in my inner ear

once.  Was when I had the combination of the Aortic aneurysm growing and I needed low dose aspirin.  They

did have me doing some exercises before everything else, think I had to focus on an x a couple feet in front

of me for a minute or something like that, was years ago and it turned out to be these other things anyway.

Glad we found the aneurysm, I was headed away from this world.

Paul, congrats on your 4 months.  you are still in a tough time but you're leaving the feeding of the addition behind.

I'm so glad it's not in my life anymore.  I just had to replace the sub frame and a couple frame rails of the uni-body

of the Subaru Baja I bought new when I stopped smoking, 15 years ago.  New York salt even with undercoating.  I'm

glad you have made it here.  The money, time, and detriment to our health of that addition is terrible.  Our own brains

fight to keep the flow of dopamine to the receptors of our brains going.  Glad you have that jogging route in the city, helps

to fight the addition and builds your body back from the damage that was done. 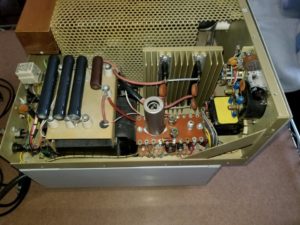 The large long 50 watt resistors on the left are the ones that had to be replaced.  Not my amp but a similar one.

hope all goes well with your ears etc....have never heard of where your going never mind having been there...and hope your day is good....no updates as of yet on Granddaughter in law...Kacee...is simpler...her name....

Dear Kitty ~
it’s one of the Keys in Florida…..I believe we fly Into Miami, rent a car and drive down. It’s called Cheeca’s Resort ~

Today, I have errands and Finn to the Veterinarian for his Morris Animal foundation studies.

I am just checking in with you in this sunshine-y kind of day here in Ohio.  I hope you are doing well.

Good morning all.  Rainy couple days here now but sunny for 5 days after that.  Probably about the same for

all of us.  Had sunshine on Thursday, mowed our lawn for the first time.  Fixed a wire antenna that came down

in the wet snow.  Wife went to the green houses with one of our daughters and got lots of flowers.  We put them

around the pool these days.  I spread her older potting soil in the spots in the lawn that are damaged from us

putting in drainage ditches.  Also bought some new for the lawn.  Kind with miracle grow in it helps the grass grow.

Paul, lucky for me my sense of smell is almost gone.  I don't mind the smell of cow pastures or where manure is

spread on fields but the cat urine in the farm house where my brother and his wife live is terrible to me.  I can still

smell it.  When gasoline is spilled I can tell something is off but can't really smell it.  My wife could smell gas if it

dripped once an hour 50 yards away so that protects us.  I grew up around barns and cow pastures so seems

normal to me but can barely smell it anymore.

My hearing is so so.  Seem to hear ok but some of the sounds in hearing tests I haven't been able to hear for many

have a pair with me and have some that are used spread around.

Hope everyone is doing well.

Just stopping by to wish all of the Mom's a Happy Mother's Day week-end.  I hear tell that the sun and warmer temperatures will begin on Sunday and continue for a week.  We have had enough, enough of the rain and slosh.  Spring flowers bring May flowers.

Everyone, have a nice week-end and of course, we know we are all smoke-free!!    Susan