Trump Flips Out At Reporter

Candace Owens: Not Inviting to Speak

He was voting for Biden but ...

Brandon Caserta is an anarchist

Armenia and Azerbaijan Return to War

France - Nice: Who was the attacker?

We can't trust anyone

Yasmin Ratansi - yet another corruption

Canadian said he killed for ISIS.

Walk Away From Money

Flu Shot During The COVID-19 Pandemic?

The Truth About The Fall of Rome

BerrySteph troll of the year   Discussions

I'm sorry if you don't like stories from the US press being published. 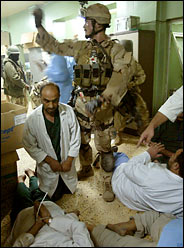 The New York Times had published this picture -->>

Firs, it legitimised and boasted of the roughing up and killing of doctors (the very thing the Red Cross was set up to stop - why can't Americans comply with the things that the Nazis did?).

To excuse the atrocities, the story in the NYT was this, American forces had:

... made little secret of their irritation with what they contend are inflated civilian casualty figures that regularly flow from the hospital - propaganda, they believe, for the Falluja insurgents, whom they blame for much of the car bombings, beheadings and other acts of terror in Iraq. http://www.nytimes.com/2004/11/08/international/middleeast/08hospital.html

A week later, the US dropped all pretence of acting decently, the NYT again:

... The offensive also shut down what officers said was a propaganda weapon for the militants: Falluja General Hospital, with its stream of reports of civilian casualties. http://www.nytimes.com/2004/11/15/politics/15military.html

Maybe someone could help me with the next report, what happened to the other hospital:

April 04, 2006... Turning beyond the U.S. mainstream, we discover also that "Dr. Sami al-Jumaili described how U.S. warplanes bombed the Central Health Centre in which he was working," killing thirty-five patients and twenty-four staff.

His report was confirmed by an Iraqi reporter for Reuters and the BBC, and by Dr. Eiman al-Ani of Falluja General Hospital, who said that the entire health center, which he reached shortly after the attack, had collapsed on the patients. The attacking forces said that the report was "unsubstantiated."

In another gross violation of international humanitarian law, even minimal decency, the U.S. military denied the Iraqi Red Crescent access to Falluja.

Sir Nigel Young, the chief executive of the British Red Cross, condemned the action as "hugely significant." It sets "a dangerous precedent," he said: "The Red Crescent had a mandate to meet the needs of the local population facing a huge crisis." Perhaps this additional crime was a reaction to a very unusual public statement by the International Committee of the Red Cross, condemning all sides in the war in Iraq for their "utter contempt for humanity." http://www.zmag.org/content/showarticle.cfm?SectionID=15&ItemID=10038

Finally, the US seems to have blocked all forms of humanitarian aid to the city for a further 6 months!

But good for mind training without fears

What has these endless copyspaste articles anything to do with your trolling?

A worthy candidate for the Delphi ignore feature

You bet, but apparently here (Voltaire fans) no one gets banned, people are having fun with her, she keeps blaming the U.S.A  for everything

''I disapprove of what you say, but will defend to the death your right to say it.''

What has these endless copyspaste articles anything to do with your trolling?

I'm protesting Holocaust II as has been going on since 2001 at the latest.

Approaching 6 million killed since then (or maybe started earlier, since 1991?) - the genocide to be ramped up to 60 million and then 600 million of the brown people.

she keeps blaming the U.S.A  for everything

Fact - Saddam Hussein was three times given the green light to invade Kuwait once he'd massed his troops on the border.

That's right, she is a trolling prank!