Judges killed in attack in Afghanistan

IRAN vs U.S-Department of Defense

The Triumph of Capitalism

Are we going into WWIII?

The Five Vs The View?

Why did Bush go to war in Iraq?

The real Truth about Palestine

No secrets in Mississippi

The Ship That Never Was (none fiction)

How to Be a Conservative

Harris: Good or Bad without Religion

The Dangers of Democracy

Will Franken (inspired by Greta Thunberg)

President Trump's Once in a Lifetime

BerrySteph troll of the year

He fux the dux.

A Map for the inquisitive

I have seen several documentaries about Vietnam war, none of them got be into a conlusion how and why so much effort for an ilogical sense how mankind become such a warmonger and not realise it on time!

11
ReplyToggle Dropdown
Msg 4 of 45 to GonghisKhanGonghisKhan
In reply toRe: msg 3

There are endless movies and books written about the Vietnam war, none come to really conprehend "Why and How" one that I read is... DISPATCHES

Dispatches makes us see, in unforgettable and unflinching detail, the chaos and fervor of the war and the surreal insanity of life in that singular combat zone. Michael Herr’s unsparing, unorthodox retellings of the day-to-day events in Vietnam take on the force of poetry, rendering clarity from one of the most incomprehensible and nightmarish events of our time.

12
ReplyToggle Dropdown
Msg 5 of 45 to Sand_GrainSand_Grain
In reply toRe: msg 4

Music experience done especially for Vietnam and poetry of course!!!

11
ReplyToggle Dropdown
Msg 6 of 45 to GonghisKhanGonghisKhan
In reply toRe: msg 5

Emotional events and experience bring up a lot of creativity, when we feel helpless to mankind's destruction, some build other destroy and disrupt ... please feel free to share!

Einstein had it right:

11
ReplyToggle Dropdown
Msg 7 of 45 to Sand_GrainSand_Grain
In reply toRe: msg 2

A while ago, I have seen a documentary whereas the soldiers told the story that most of the time they were fighting under the influence of hardcore drugs - constantly they were totally numb about the atrocities they did!! ..

8
ReplyToggle Dropdown
Msg 8 of 45 to Sand_GrainSand_Grain
In reply toRe: msg 1 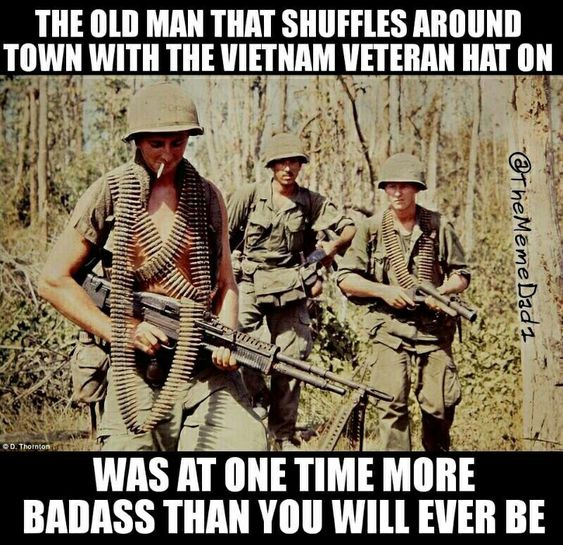 I have no opinion.

I was just made aware of people boasting that they were the meanest muttha-fukkas in the world.

Should I refuse to believe what they told me?

0
ReplyToggle Dropdown
Msg 9 of 45 to Sand_GrainSand_Grain
In reply toRe: msg 4

Movies and books written by American authors often show the American rightious side, we actually will never know what happened as the communist where going to spread all over the world as American president announced!

7
ReplyToggle Dropdown
Msg 10 of 45 to Sand_GrainSand_Grain
In reply toRe: msg 1

All they got was this stupid stamp, weapons, T-28 Trohan nukes and erythromycin deals into the stockbroker's market!!!

7
ReplyToggle Dropdown
Msg 11 of 45 to BerryStephBerrySteph
In reply toRe: msg 8

Don't blame every American, they were victims as well, blame the top leaders and the stockbroker dealings!!!

I don't do that, honest.

But I notice this:

2006 ... The Lancet study estimating 100,000 probable deaths [in Iraq] by October 2004 elicited enough comment in England that the government had to issue an embarrassing denial ... it would be at least as accurate to describe it as the report that "as few as 100,000" died.

Though the report was released at the height of the U.S. presidential campaign, it appears that neither of the leading candidates was ever publicly questioned about it.

The reaction follows the general pattern when massive atrocities are perpetrated by the wrong agent. A striking example is the Indochina wars.

In the only poll (to my knowledge) in which people were asked to estimate the number of Vietnamese deaths, the mean estimate was 100,000, about 5% of the official figure;

... The authors of the study comment that it is as if college students in Germany estimated Holocaust deaths at 300,000, in which case we might conclude that there are some problems in Germany - and if Germany ruled the world, some rather more serious problems.

... the actual toll is unknown, and of no more interest than the also unknown toll of casualties of U.S. chemical warfare. http://www.tomdispatch.com/post/73753/

Note the maths there - 100,000 dead in Vietnam is 5% of 2 million. But the real toll on the region of US meddling and arms is probably in the region of 8 to 10 million. So these estimates by US college students could be just 1% of the real figure.

That's equivalent to a German student claiming that the Holocaust killed just 60,000 Jews.