Welcome to our free quilting forum, the Online Quilting Guild, where you can share ideas about quilting, swap fabrics and other projects, and chat with quilters worldwide.

Read Our Guidelines Before You PostLive!

What Are You Working On Now?

No Magnets in Back of HQ 18 Avante

how crazy am I?

How do I not violate copyright laws?

I Could Make One Heck of a Snow Angel

Can We Talk About Refrigerators?

Looking for singing and canoes

Out my window - Robins

Free patterns-Me and My Sister Designs

what happens when your quilting density isn't even

U tube on using jeans

An unusual thing to quilt

I am a Finalist! Cherrywood Diana

I love applique vines in borders.  But typically have a difficult time envisioning how to quilt around them.    In the Innova FB group I belong to, a member recently posted this photo of a quilt she's working on.  It is *amazing*.   I'm not sure that I would like quite that much quilting in the border because it would require that density of quilting in the interior to keep the quilt flat.

But, lordy, lordy, it sure is pretty.

Notice how she did some feathers on BOTH sides of the applique vine before she did the beadboard.  Very clever.

If you were doing single lines, you'd stitch from the raw edge straight up to the stopping point, then *without moving the needle sideways*, stitch straight back down the line you just stitched to the raw edge.  Yes, you want to be tracing the line you just did but if you are using a straight-edge ruler/template, just keep it in place and it shouldn't be difficult.  If you happen to go off the previously stitched line, no big deal ... no one is going to notice it once the quilt is laundered.  :-)   Then, stitch along the raw edge for however wide you want the spacing to be and repeat.

But, take a look at those feathers and scrolls and circles on the inside of the applique vine!  WOWSERS!   To me, that is such a visual delight!  Again, not entirely certain that I'd care to do *that* much quilting but I sure do love the look.  :-)

What lovely quilting.  More dense than I would like it but I sure can admire it.

Those are neat ideas to adapt and use in various ways!  I agree the leathers along the applique are very neat looking.
and I have never seen or heard of breadboard quilting!  But I like it!  Thanks for sharing!

0
ReplyToggle Dropdown
Msg 4 of 35 to bornblesse2bornblesse2
In reply toRe: msg 3

I have never seen or heard of breadboard quilting!

<smile>   beadboard.   :-)   It's to emulate the look of paneling of walls from waist level to the floor. 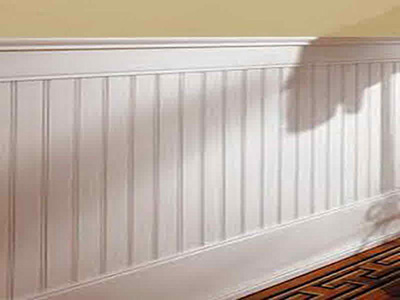 Ha! that is right. wondered there for a moment! I too love it but would pay to get it done. above my abilities.
0
ReplyToggle Dropdown
Msg 7 of 35 to Pirate (PIRATE_SR)PIRATE_SR
In reply toRe: msg 4

I’ve seen that before....but never translated the idea to quilting!  Thanks for sharing the ideas.

Beadboard has more uses than that, Pirate, but your photo is one excellent example.

You could also think of it as "corduroy gone wrong" .... LOL

I too love it but would pay to get it done. above my abilities.

Actually, this is one of the very simpler ones for longarm work.  All you need is a straight edge.

I'm sure you can find a video online on how to do this but if you can't find one and would like to see one in action, just let me know.  I'd be happy to video how I do it.

0
ReplyToggle Dropdown
Msg 10 of 35 to judyinohiojudyinohio
In reply toRe: msg 8

Beadboard has more uses than that

oh?   would you happen to have samples of that to look at?  I'm only familiar with what I've shown.