Does anyone believe in the 1969 moon landing theory ?

Barely 6 weeks before the launch, Armstrong had to eject while testing the unstable landing module.  Was the flaw fixed in time ?

Your dentist proves the event was a hoax by running out the room when a 7 second X-Ray is taken, yet morons reckon astronauts endured 3 days through the Van Allen Radiation Belts.

The rocket "armour-plating" was barely 2cm thick, that only 3/4 of an inch.  Gravity or lack thereof meant astronauts could have proved their location by jumping 6 times higher than normal.  THEY FAILED MISERABLY.  The photos were doctored up.  The circus took place using studio lights at Area 51, Nevada.  The SMALL inward opening door meant the Michelin man astronauts would battle to exit the lunar module.  Was there insufficient space in space to let the door open outwards ?

0
ReplyToggle Dropdown
Msg 2 of 12 to Harold27ZHarold27Z
In reply toRe: msg 1

13 Reasons Why the Moon Landing was FAKE - Ultra Spiritual life episode 125 Want to be the first to see my new videos with 24 hour early access? Just click t... 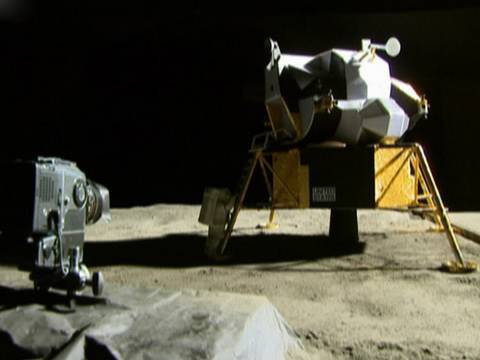 Was the moon landing faked - Mythbusters

More than 40 years on conspiracy theories still abound that the moon landing was a hoax. Mythbusters take a look at some of these claims and try to recreate ...

I already saw the so-called "Mythbusters" moon landing episode.  They chose the softer arguments, not the difficult ones to which I alluded.

I will watch the flat-earth long-haired hippy when I return from the shop.

Meanwhile, he has not yet taken a sunrise flight when the sun forms a semi-circle.

The religious hypocrites had not bothered to read Job 26:10 plus Isiah 40:22 confirming the said semi-circle.

The guy made several good points which I knew about already due to having 13,000 documentaries.

0
ReplyToggle Dropdown
Msg 8 of 12 to Harold27ZHarold27Z
In reply toRe: msg 6

Not sure about the semicircle.

But if the Earth is flat, then why are all the other objects in the solar system spherical?

And why does a lunar eclipse cover the moon?  Shouldn't an eclipse just be a straight line across the middle of the moon?

When flying as the sun rises, you will soon notice the semi-circle as described in the bible verses mentioned - I did not just make them up all by myself.

I know that the sunset is an optical illusion.  It has actually gone below the horizon completely before you see it drop.