Most in the USA do not need any kind of license to hold, possess or buy a gun, rifle or pistol.  To CARRY the weapon on your person DOES require a permit

Buying the gun needs to be the most important point of concern, as you could walk around with a concealed gun anywhere without anyone knowing until you run into a metal detector.

The biggest thing is the Federal prohibition on automatic weapons, though a special license can be had with in depth background checks and money.

And you just buy a bump stock or conversion kit and circumvent that law.

One report, one word ("domestic") and now one DAY.

The more lapses I hear about, the more infuriated I get.

As far as I can see, ONE failure to report created this opportunity to buy.

I think there are a lot of failures.

Five people have been killed and at least seven children and adults have been injured after a series of shootings at multiple locations, including a primary school, in Northern California.

Details were still sketchy hours after the shooting and authorities did not have a firm count of the injured due to the number of places where the gunman opened fire in the community of Rancho Tehama Reserve, about 200 kilometres north of Sacramento.

Tehama County Assistant Sheriff Phil Johnston confirmed the shooter was shot dead during the incident and officers were investigating at least five crime scenes in and around the school.

One student was injured at the school and another child was shot while driving with a woman, who also was wounded, Sheriff Johnston said.

"It was very clear at the onset that we had an individual that was randomly picking targets," he said.

The important thing is the people who could actually do something about this are sending their "thoughts and prayers".

The wife of a gunman who went on a shooting rampage in a Northern California town was found dead inside their home, authorities say, raising the death toll from the attack to five.

Investigators discovered the body of Kevin Janson Neal's wife hidden under the floor with several gunshot wounds and believe her slaying was the start of the rampage, Tehama County Assistant Sheriff Phil Johnston said.

At the time of the attack, the gunman was out on bail after he was charged with stabbing a neighbour.

Court records also show Neal was barred in February from having guns after the assault.

Neighbours had complained about him firing hundreds of rounds from his house, and the assistant sheriff acknowledged officers had visited the home on several occasions.

"Every time we responded, we would try to make contact with Mr Neal," Mr Johnston said.

"He was not law-enforcement friendly. He would not come to the door. His house was arranged in a manner where we couldn't detect him being there.

"We can't anticipate what people are going to do. We don't have a crystal ball."

Yet Neal was free and able to use a semi-automatic rifle and two handguns on Tuesday to shoot 14 people, including at a primary school, before he died in the shootout with police.

Court records obtained by The Associated Press show Neal surrendered his weapons as required by law in February, but Mr Johnston said they recovered two illegally made semi-automatic rifles and two handguns, registered in someone else's name.

And there you have it.  Even a flagged criminal who could not legally purchase a gun managed to get four. 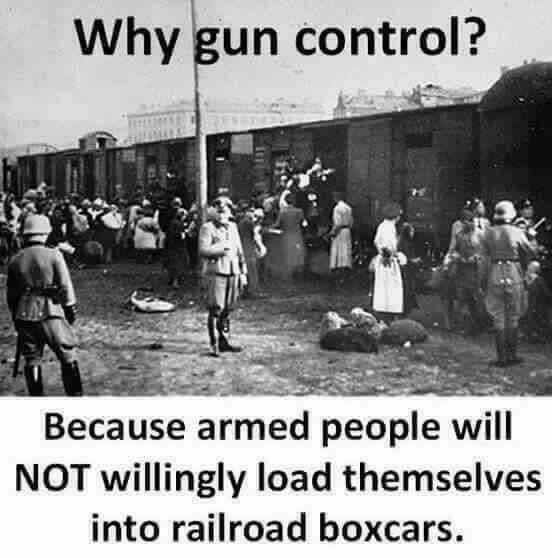 California's strict gun law really helped there, didn't it?  The guy was known felon and was not allowed to have, possess or buy a gun but he had some.  Do you propose that every house has an annual inspection to assure only those with sound mental judgment and permits have guns?

0
ReplyToggle Dropdown
Msg 67 of 296 to ElDotardoElDotardo
In reply toRe: msg 65

Are you saying that (let's face it) Muslims are in danger of being the victims in the next Holocaust?

Give every Muslim a gun.