Democrat House Speaker Nancy Pelosi met with Capitol Police officers prior to their testimony before the congressional “January 6 Commission,” where the officers delivered shockingly partisan and widely-doubted accounts of the protest events.

Pelosi personally invited Harry Dunn, a Capitol police officer, and Metro police officers Daniel Hodges and Michael Fanone to the House gallery for a vote back in June, making it clear that Pelosi had those three officers handpicked.

Here is a photo of Pelosi meeting with Dunn, Fanone, and Hodges, alongside fellow leftist Democrat Rep. Eric Swalwell. 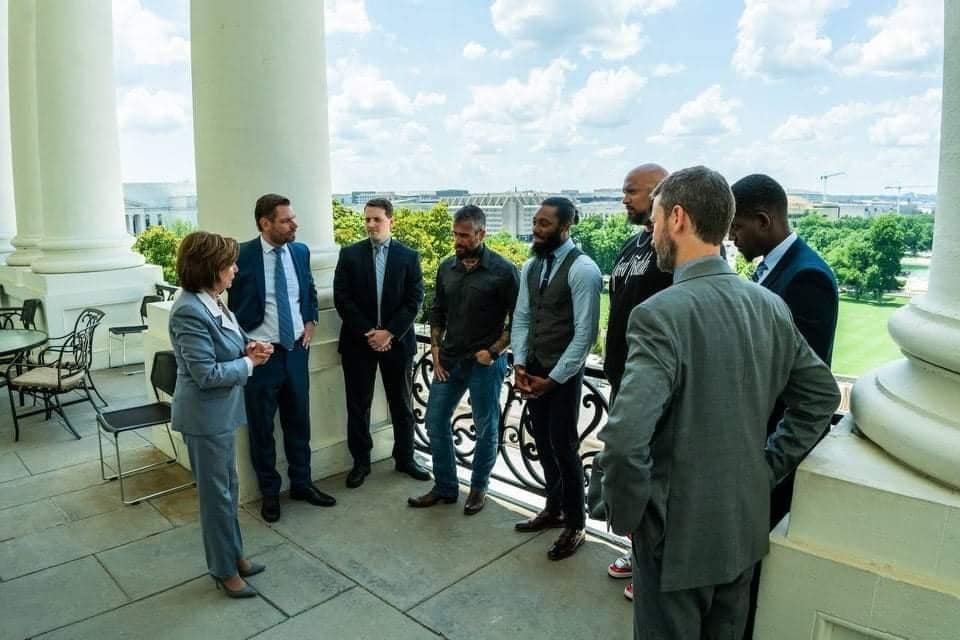 No masks, and no social distancing.

Harry Dunn, the Capitol Hill Police Department officer who claimed, without evidence, during Tuesday’s Congressional hearing that he was called a “n****r” by Jan. 6 Trump supporters, is a devout left-wing activist who frequently posted about his hatred for conservatives and his association with black supremacists on Twitter.

“Racism is so American, that when you protest it, people think that you are protesting America! #RacistInChief #racism #leaveittowhitestotellblackswhatisntracist #IStandWithIlhanOmar #squad,” Dunn tweeted in July 2019, expressing his feelings about “whites” and his love for Rep. Ilhan Omar (D-MN).

In May, Dunn posted a picture of a tattoo that he had gotten to show off his support for black grievance politics. “The eye is crying blood, the black heart represents the struggle of black people. Blood tears for all the bloodshed in the struggle for equality while getting in ‘good trouble’. The red lightning is chaos all around #goodtrouble #JohnLewis,” Dunn wrote in support of dead politician and political avtivist John Lewis.

“If me talking about racism makes you uncomfortable, then thats [sic] exactly why I’m doing it,” Dunn declared in April. He also narrated an anti-Trump political video for liberal organization The Lincoln Project.

During the June 2020 George Floyd riots, Dunn, who has been held up as a model police officer who represents the collective feelings of law enforcement, retweeted a post attacking police officers.

Perhaps most alarmingly, in June 2019 Dunn retweeted a video from black supremacist Tariq Nasheed that instigated hate towards a White man. Dunn compared the man to Trayvon Martin attack survivor George Zimmerman, and appeared to negatively reference heritage and sexual orientation by hyperbolizing that the man had “a Confederate and Rainbow flag wrapped around him.”https://twitter.com/libradunn/status/1143853798852636672

Fox News host Tucker Carlson, one of the targets of Dunn’s political rage, pointed out the CHPD officer’s history of leftist Twitter activism, stating “Harry Dunn has very little in common with your average cop. Dunn is an angry left-wing political activist.”

Pelosi isn't on the panel.

Here Are The 9 Lawmakers Investigating The Jan. 6 Capitol Attack

As for their "partisan" testimony - it's understandable they would be angry at the people who participated in, and incited, the riot.

Fox News host Tucker Carlson, one of the targets of Dunn’s political rage, pointed out the CHPD officer’s history of leftist Twitter activism, stating “Harry Dunn has very little in common with your average cop. Dunn is an angry left-wing political activist.”

Tucker Carlson is a waste of precious oxygen.

That doesn't mean, that Pelosi had no influence on the officers who testified or that she didn't hand-pick them.

It's fine to be angry ... but it's not fine to call people insurrectionist and terrorist who have not been charged as such. Nor to paint all Trump supporters with a broad brush.

Officer Hodges, didn't mention the Trump supporter who showed concern for him, and asked him if he was OK.

Officer Michael Fanone, didn't mention the Trump supporters who began shielding him and offering a level of protection from those who were harming him. His message to those who helped him: "Thank you, but f--- you for being there."  ~ end quote

If those Trump supporters, had not "been there" then Fanone might have fared worse. He should had stopped at, "Thank you."

The nine lawmakers on the panel, are all biased Trump-haters ... and it showed.

Regardless, of your (entitled) opinion of Tucker Carlson, Officer Dunn is an "angry left-wing political activist" ... not that he doesn't have a right to be angry about 1/6.

I'm angry about 1/6, too, because it was stupid and uncalled for; what can I say, some Trump supporters are idiots. I can't defend that nor excuse it, and I hate that I have been put in that position. Trump supporters, shouldn't be doing things that cannot be defended.

Having said that, 1/6 was not ALL the fault of Trump supporters.

As the old saying goes, "Something is rotten in Denmark."

The nine lawmakers on the panel, are all biased Trump-haters ... and it showed.

It's all or nothing with Trump.  That's the point.  I think you would be hard pressed to find someone who does NOT have a strong opinion on Trump.

The panel is either full of "NeverTrumpers" or "AssKissers".

The problem is, the "ass-kissers" are guilty of inciting the mob.  They can't preside over their own investigation.

I absolutely want to hear from the Capitol police who took selfies with the terrorists!  I hope the DOJ want to talk to them, too.

I'm positive, that there are four Trump supporting Capitol police officers who did not incite the mob ... who would have been willing to testify at the 1/6 hearing.

And there are, certainly, four Trump supporting congresspersons who did not incite the mob who were willing to be on the 1/6 Commission panel.

Nancy Pelosi, had no business rejecting the Republican's choice of congresspersons for the panel.

And the fact that no Trump supporting Capitol police officers were called to testify shows Pelosi's, extreme, bias ... and what her agenda is.

Any Democrat who only wanted to hear from ONE side, and only wanted RINOs on the panel,  is not interested in getting to the truth.

The officer who took selfies with Trump supporters inside the Capitol should have definitely been questioned. Maybe, is is one of the 35 officers who is under investigation?

And there are, certainly, four Trump supporting congresspersons who did not incite the mob who were willing to be on the 1/6 Commission panel.

Are there?  Trump drew a line in the sand and the GOP had to choose.  So you have Romney, Cheyney and Kinzinger on one side, and sad wretched sycophants on the other...

And McConnell only serving himself.

But there is another one joining. 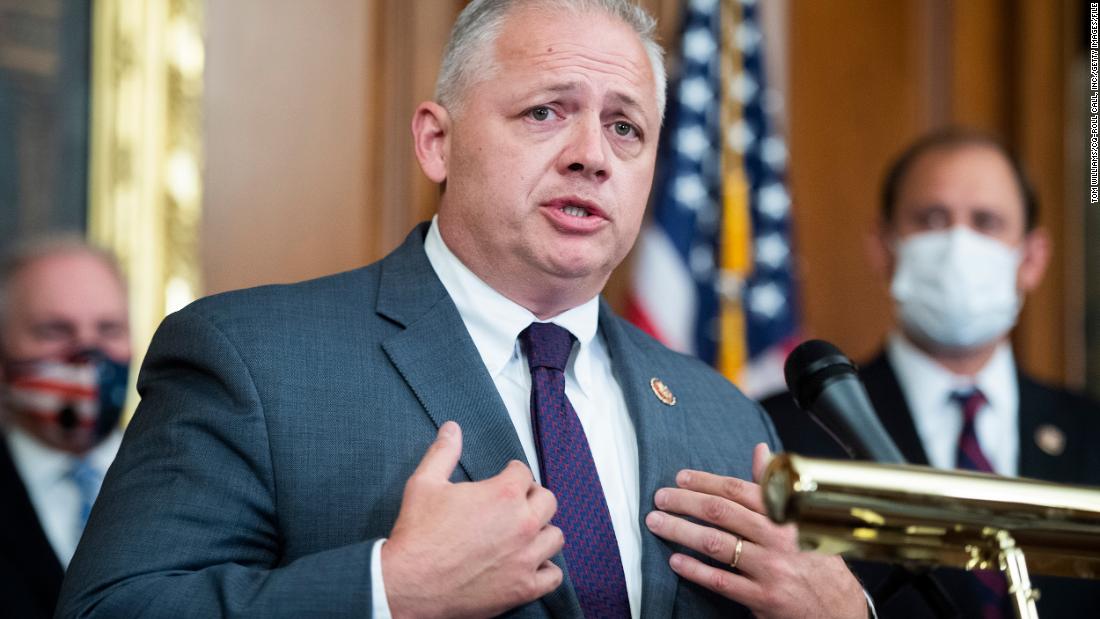 Former Rep. Denver Riggleman is joining the staff of the House select committee investigating the January 6 attack on the US Capitol, the third Republican that House Speaker Nancy Pelosi has added to the panel that GOP leadership has attacked as a partisan endeavor.