Shaman fur/horns guy   America - all of it 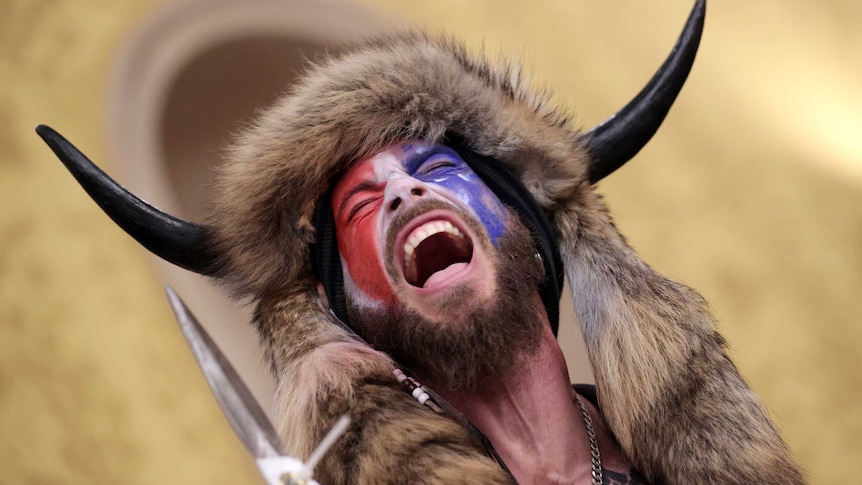 Jacob Chansley has been held without bond since his arrest shortly after the January 6 riots at Capitol Hill in Washington DC.

Trump had said that he liked voters that were uninformed, uneducated. Guess he likes them a bit mentally ill, also.

Trump asked for a "peaceful and patriotic" march to the DC Capitol ... the Shaman went against Trump's wishes so he should not have expected a pardon.

Donald J. Trump: I WOULD LIKE TO BEGIN BY ADDRESSING THE HEINOUS ATTACK ON THE U.S. CAPITOL. I AM OUTRAGED BY THE VIOLENCE AND MAYHEM. AMERICA IS AND MUST ALWAYS BE A NATION OF LAW & ORDER. THE DEMONSTRATORS WHO INFILTRATED THE CAPITAL HAVE DEFILED THE SEAT OF AMERICANS A MARKER SEE. TO THOSE WHO ENGAGED IN THE ACTS OF VIOLENCE AND DESTRUCTION, YOU DO NOT REPRESENT OUR COUNTRY. TO THOSE WHO BROKE THE LAW, YOU WILL PAY.

WE HAVE JUST BEEN THROUGH AN INTENSE ELECTION AND EMOTIONS ARE HIGH, BUT NOW TEMPERS MUST BE COOLED
...[Message truncated]
View Full Message
0
ReplyToggle Dropdown
Msg 11 of 40 to CzoeMCCzoeMC
In reply toRe: msg 9

Actually, Trump didn't say that he liked voters who are uninformed.

Wouldn't you appreciate the support of those who helped you to reach your goal, and let them know what they mean to you?

Trump did well across the board in Nevada, garnering 45.9% of the vote, but he did even better among voters with a high school education or less. Fifty-seven percent of those voters supported him, according to entrance polls.  Trump didn’t just win with less educated voters … he crushed it.

hi from dan in redding,california. i am a new spiritual witch last week like that shaman. my knockout looking,24 year old wife, is also a big spiritual witch with a magic book of etherial shadows. i have many years experience working with spiritual witches,and can tell you every magic spell that can be cast on a person by spiritual voodoo masters and other witches.

0
ReplyToggle Dropdown
Msg 14 of 40 to laddeepladdeep
In reply toRe: msg 13

hi from your archangel

Hey Archy, did thry give you your wings yet, or do you have to parasail about?

the Shaman went against Trump's wishes so he should not have expected a pardon.

He should not have expected a pardon, because Trump wasn't president anymore.

Trump did well across the board in Nevada, garnering 45.9% of the vote, but he did even better among voters with a high school education or less. Fifty-seven percent of those voters supported him, according to entrance polls.  Trump didn’t just win with less educated voters … he crushed it.

Why is this not a red flag for you?