Latest 9:58 AM by Apollonius (Theocritos)

Latest 9:18 AM by Apollonius (Theocritos)

Latest 4:43 AM by Jenifer (Zarknorph)

Latest 9:21 AM by Apollonius (Theocritos)

Italy   The U.K and Europe

What the hell went wrong?

A huge rescue effort is underway in the Italian city of Genoa after a major motorway bridge collapsed, killing at least 26 people and injuring many others.

Prosecutors said they are opening an investigation into the incident, but what exactly caused the Morandi Bridge to fall down remains unknown.

The working theory is that it was a 'structural failure'

Early speculation focused on the structural weakness of the span, with Italy's Prime Minister Giuseppe Conte saying authorities were working on the theory the collapse was due to a "structural failure".

The highway bridge was built in 1967 and the design has been criticised in the past.

Antonio Brencich, a professor specialising in reinforced concrete construction at the University of Genoa, called the span "a failure of engineering" during a 2016 interview with Italian media organisation Primocanale.

"That bridge is wrong. Sooner or later it will have to be replaced. I do not know when," he said.

"But there will be a time when the cost of maintenance will be higher than a replacement."

The Italian CNR civil engineering society said that structures dating from when the Morandi Bridge was built had surpassed their lifespan.

It cited previous accidents: a bridge that fell in April 2017 in the northern province of Cuneo, crushing a police car after the officers and driver had barely managed to get away in time; and an overpass in the northern city of Lecco that collapsed under exceptional weight, crushing a car and killing the driver.

CNR called for a Marshall Plan to repair or replace tens of thousands of bridges and viaducts built in the 1950s and 1960s.

But updating and reinforcing the bridges would be more expensive than destroying and rebuilding them with technology that could last a century.

There are also suggestions there was a lack of maintenance

"There has not been sufficient maintenance and checks, and safety work for many bridges and viaducts and bridges in Italy constructed — almost all — during the 1960s," he said.

The highway operator said work to shore up the bridge's foundation was being carried out at the time of the collapse.

Autostrade, a unit of the infrastructure group Atlantia controlled by the Benetton family, manages the section of the toll highway that collapsed.

"The collapse was unexpected and unpredictable," Stefano Marigliani, the Autostrade official responsible for the Genoa area, said.

"The bridge was constantly monitored and supervised well beyond what the law required."

He said there had been no indication that the bridge was dangerous.

Mr Toninelli has also said that if negligence played a role "whoever made a mistake must pay".

Autostrade said it would work with investigators, and that it was already assessing how to rebuild the bridge.

Corrosion or weather conditions are also being considered

Photo: The Morandi bridge was built in the 1960s. (AP: Luca Zennaro)

Witnesses reported hearing a roar as the 45-metre bridge collapsed in a torrential rain during midday traffic on the eve of a major holiday.

Some engineers have suggested the weather along with corrosion could have contributed.

"As this reinforced and pre-stressed concrete bridge has been there for 50 years, it is possible that corrosion of tendons or reinforcement may be a contributory factor," Mr Firth said.

While associate professor in structural mechanics at the University of Southampton in the UK, Mehdi Kashani, said weather could have also played a factor.

He said maintenance issues and pressure from "dynamic loads" — such as traffic and wind — could have resulted in "fatigue damage in bridge components". 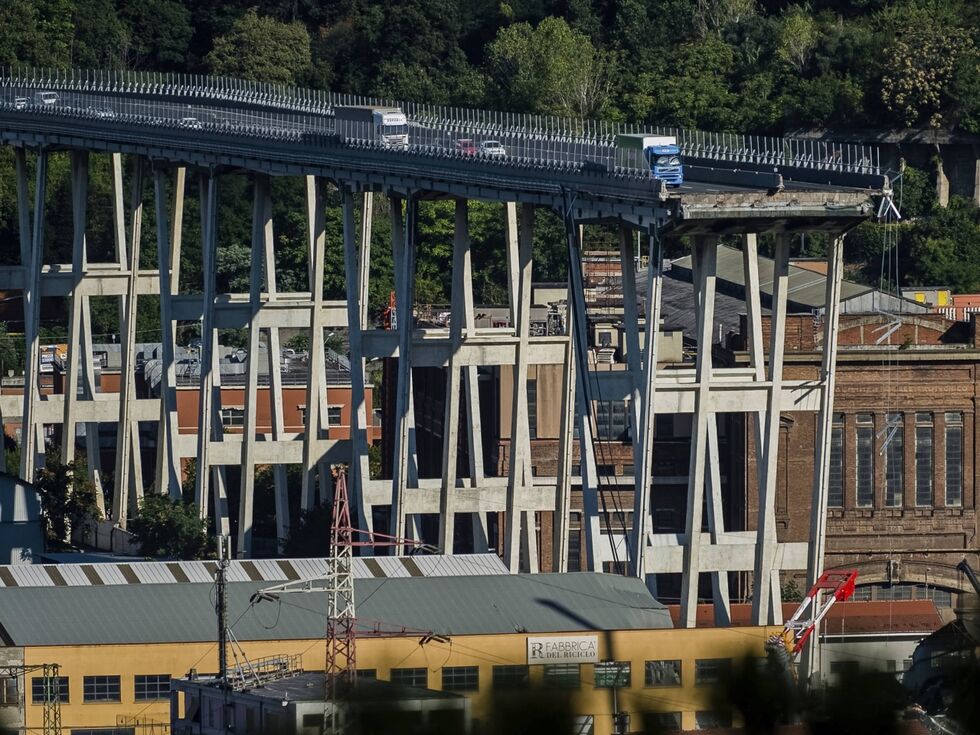 Italian rescuers are continuing the search for survivors among towering slabs of concrete wreckage in Genoa, as the death toll from the bridge collapse rose to 39 and a state of emergency was declared.

The 50-year-old Morandi bridge, part of a toll highway linking the port city of Genoa with southern France, collapsed during a violent storm on Tuesday, sending dozens of vehicles crashing onto a riverbed, a railway and two warehouses.

Italian Prime Minister Giuseppe Conte declared a state of emergency for Genoa, whose main land corridor with France has effectively been severed.

Meanwhile, fears mounted that another part of the bridge could also come crashing down, prompting authorities to widen an evacuation zone and force around 630 people out of apartments in nearby buildings.

Italian Transport Minister, Danilo Toninelli, raised the possibility that the evacuees may never again live there, saying the need to rebuild a new bridge on the city's key artery could require the destruction of nearby residential buildings.

As the city of 600,000 reeled from the tragedy, about 1,000 rescue workers kept up the search for victims, picking through tons of broken concrete slabs, smashed vehicles and twisted steel.

At least two more bodies were pulled out.

Italy's Deputy Prime Minister Luigi Di Maio blamed the bridge collapse on a lack of maintenance by the private company that operates many of the nation's toll highways.

"Instead of investing money for maintenance, they divide the profits. And that is why the bridge falls," Mr Di Maio said of the holding company that controls Autostrade per L'Italia.

Mr Toninelli also pointed the finger at Autostrade, saying its leaders should resign, and Mr Conte said Italy would look for another company to maintain much of the nation's highway system and would demand "more stringent" rules about maintenance.

Italy's Deputy Prime Minister Luigi Di Maio blamed the bridge collapse on a lack of maintenance by the private company that operates many of the nation's toll highways.

"Instead of investing money for maintenance, they divide the profits. And that is why the bridge falls," Mr Di Maio said of the holding company that controls Autostrade per L'Italia.

Mr Toninelli also pointed the finger at Autostrade, saying its leaders should resign, and Mr Conte said Italy would look for another company to maintain much of the nation's highway system and would demand "more stringent" rules about maintenance.

That's capitalism for you.

That New Man never made it. I watched the undoing of communism at close range.

It turns out that BENETTON is one of the biggest shareholders of the highway maintenance and administration company, through companies called Atlantia and Edizione.

None of the family members of Benetton are personnally involved in the running of these companies.