A US Navy warship successfully tests a new high-energy laser weapon that can destroy aircraft and drones mid-flight, the US Navy says.

Global research into weapons is continuous , ceaseless and will remain so whilst the West believes its security is threatened the same of course applies in the East for the same reasons .

Technically speaking the US is decades ahead in its capabilities and research .

A US Navy warship successfully tests a new high-energy laser weapon that can destroy aircraft and drones mid-flight, the US Navy says.

That would be quite a game changer. Not a very convincing video, however - what sort of test do you run in the dark?

And of course, a plane/drone is much more vulnerable than a missile. Israel has spent 12 years spectacularly failing to down almost any Qassams. Which only need to be painted silver to be completely safe.

Note - the energy required to do this is huge - enormous batteries, far bigger than will fit on a truck.

Hamas have launched in excess of 18,000 rockets into Israel the Iron Dome (as seen by hundreds of thousands of people in Israel and MILLIONS around the World including TV coverage by our enemies as well as friends) have dealt with about 90%

General Numbnuts is OBSESSED With Israel no less than the Iron Dome , it was a game changer

Hamas have launched in excess of 18,000 rockets into Israel

Why should we believe you? Especially when Israel is clearly in league with the serious jihadis (as Israel intended that Hamas become).

The rockets only started doing that when you cut off Gaza and started shelling the whole concentration camp. 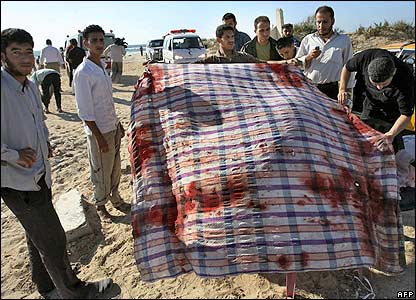 During 2006, Israeli Security Forces fired some 14,000 artillery shells into the Gaza Strip which were responsible for killing 59 persons, almost all of them civilians. [14 http://www.hrw.org/sites/default/files/reports/iopt0707web.pdf p.49 ... (HRW) noted that the IDF had been cited in Israeli media as saying ... it had "positive identities of over 220 gunmen killed in fighting ..." and asked if any of those 220 had been killed by artillery shelling. The IDF ... did not respond to this question.]

Note that the UN (itself heavily Zionist manipulated by obstruction, detention and killing of its staff) deceptively quotes the HRW report as counting 59 dead - although the IDF itself claims to have killed 220 "fighters".

Judging by the reporting of the Jenin Massacre, its quite likely that the death told was 7 or 49 times greater than the "59 persons" mentioned here. The unknown number of civilians killed in Gaza probably runs into 1000s and possibly 10s of 1000s.

Extermination only narrowly averted by profound international disgust at the Gaza Beach Blast, anyone?

(Unbelievably, the lying Zionists still deny it was their shells, being fired at civilians at exactly this time that killed all these people!)

Thanks for posting them.

What you mean is, 2006 marked the start of the full-scale genocide of the Palestinians.

You want that land and you want it with vacant possession and you don't care how many you murder to get it.

Very interesting figures BM.  Thanks for posting them.

You're such filth. BM lives there and could be homeless next week or next year.

I appreciate Berry's sentiments , it is unlikely however I will end up living in a council house like he does , close to the rail lines as he does , driving a  very old French banger likes he does or drawing unemployment likes he does or suffer the intolerable paranoia that has enveloped him  .