Let’s talk history   America - all of it

One place where I come in handy is my undying "a plague on both your houses" mindset...

That comes in very handy for cultures in resistence like my wife's in which nonviolence is a lifestyle.

0
ReplyToggle Dropdown
Msg 23 of 50 to slackerxslackerx
In reply toRe: msg 22

Of the tribe itself, or just among some fraction of the population?

0
ReplyToggle Dropdown
Msg 24 of 50 to CamGearyCamGeary
In reply toRe: msg 23

I had an article from the American Friends Service Commitee a couple of decades ago. I'll have to find my old post and retrieve the article. If I recall correctly, the article uses the term, "Comunities in Resistance" to describe such cultures. I'm sure the link is broken by now, but the wayback machine will probably have it.

Meanwhile, here's a video about las Cortamates. Aparently, the totumo tree comes from seeds that Black women brought there hidden in their hair centuries ago.

The totumo tree is just a small part of the magic of the valley.

In the Patía Valley, in the south of the department of Cauca, there is an ancestral practice that has become an integral part of the culture and identity of the inhabitants of this area: mate cutting. From very early in the morning Ana Celia and Amalfi, undertake a long journey through the arid grasslands of this territory, to get a fruit that will allow them to bring sustenance to their families. Territory, life and tradition make up the imaginary of this practice, which currently faces an imminent risk of disappearance.

0
ReplyToggle Dropdown
Msg 25 of 50 to slackerxslackerx
In reply toRe: msg 24

"So glad it wudn't me"-Chuck Berry

0
ReplyToggle Dropdown
Msg 26 of 50 to CamGearyCamGeary
In reply toRe: msg 25

Here's the PDF I promised. I posted it in Coqui's forum here back in March of 2004. As you can see, the link is broken.

But the Wayback Machine has several versions, including one from March 23, 2004, which should be the version that I posted back then.

Look under "Nonviolence As a Way of Life". In the extreme south of Cauca.

From Wikipedia (English version). Look for "Black spooks". (They would be my wife's ancestors.)

History
The populated of Patía Valley, was conformed since prehispanic period by Bojoles Indians, Chapa chugas, Sindaguas y Patias, leaving their vestige to disappear behind the forced work and the missions in the Indians doctrinaire chapels and after of slaves that made part of the social organization of the farm landowners, that nowadays are places of archeologic evidence.
The foundation of the towns in the Patía Valley was realized by the clergy; When Indian population decimated, came the black spooks (black run off people) and released of the farms and mines that were exploited along the Patía river Guachicono until Juananbu in the Nariño department, creating the towns — or palenques — of black people.
The myths created in this region tell that after they ran off and with the idea of descrying their original Africa, the black spooks climbed the Manzanillo hill and when they did not see their ancestral land, they cried and cried, so much that their tears formed a lake.
Today this foundational mythical place can be visited in the rock of the hill Manzanillo, from which springs permanently feed the riverbed of the Valerio ravine.
Within its task there was the extraction of gold with punts in the depression called The Hoyo, where are located Quilcacé river and Esmita, where nowadays is handmade exploit mines of coal.

0
ReplyToggle Dropdown
Msg 27 of 50 to CamGearyCamGeary
In reply toRe: msg 25

"So glad it wudn't me"-Chuck Berry

I'm not sure if you are referring to the fruit of the totumo tree, of if you intended this as a response to this post. 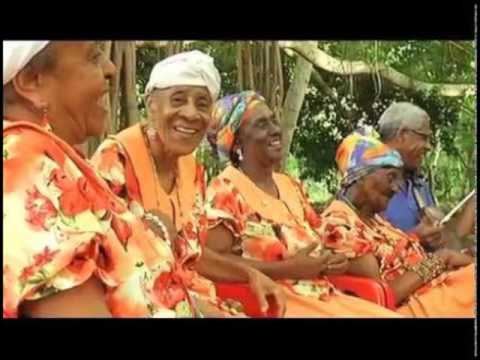 I'm referring to living way down there....

0
ReplyToggle Dropdown
Msg 29 of 50 to CamGearyCamGeary
In reply toRe: msg 28

I'm referring to living way down there....

It's hot as hell in the valley, or so I've heard.

In fact, apparently it's the hottest place in South America, or so I've read.

Climate tends to be a function of altitude in Colombia.

I'm not used to such prolonged heat, but some folks don't mind.

It's too hot in Rhode Island, never mind in the tropics...

0
ReplyToggle Dropdown
Msg 31 of 50 to CamGearyCamGeary
In reply toRe: msg 30

It's too hot in Rhode Island, never mind in the tropics...

Popayan, the capitol of Cauca, is close by, and is in the highlands. Climate there is wonderful. 70s.

That's where I really want to live. We could just zip down into the valley to Patia any time we want.

I can't tolerate heat, either. Even in Palmira, I have a fan blowing on my face much of the time.