The Colosseum was built with the loot from the Jewish Temple

Nobody disputed them until around 1780, when Jews were released from the feudal system in most places.

And in fact, you've assured me that Zionism was born in Vilna at almost exactly that time

Naturally, I'm only a student learning at your feet - but this blurb seems respectable and Zionist.

1990 a document was discovered in Poland, according to which the Gaon of Vilna (1720 1797) stopped in Amsterdam on his way to Erez Israel. Research based on this astonishing find, detailed in this book, brought about a chain of dramatic discoveries that fundamentally altered our knowledge of the historic figure of the Gaon of Vilna.

One such discovery reveals that the journey to Erez Israel transpired in the year 1778, three years prior to 1781 the year set as the end time by the kabbalists of that generation, including the Gaon of Vilna himself.

This book demonstrates that the Gaon of Vilna traveled to Erez Israel in order to compose a new Shulh an arukh, a final halakhic code that would bring an end to halakhic disputes within the Jewish people. In this way he hoped to ensure the Messiah s arrival in the year 1781.

Mysteriously, the Gaon of Vilna abandoned his dream, reporting that Heaven had prevented him. By following in the Gaon s footsteps, The Gaon of Vilna and His Messianic Vision uncovers the cause of his aborted journey and the revolutionary approach to redemption that the Gaon subsequently developed.

SO there were no Jewish revolts during the Roman Occupation

There were loads of revolts against the puppet government - one of them completely peaceful and the Romans were so incensed that, with the approval of the crowd, they hung the worst villain on a cross and cruxified him.

Show me. I can see the Menorah in many photos but no close up details.

Oops, sorry, you have found a good quality picture.

But you're a bad man, you're supposed to credit (as I always try to do).

And, while it could have come from Jerusalem it wasn't taken from the priestly establishment but from the Zealots.

BM's picture (as he managed to cunningly conceal in a sloppily presented post!) appears to show a modern reproduction of the Roman frieze.

Every possibility its a modern "reconstruction", a virtual forgery. Pictures of the original may show it very different.

No wonder that, when I went looking for pictures of the original, I couldn't find any close-ups whatsoever.

This is the modern and likely inaccurate replica: 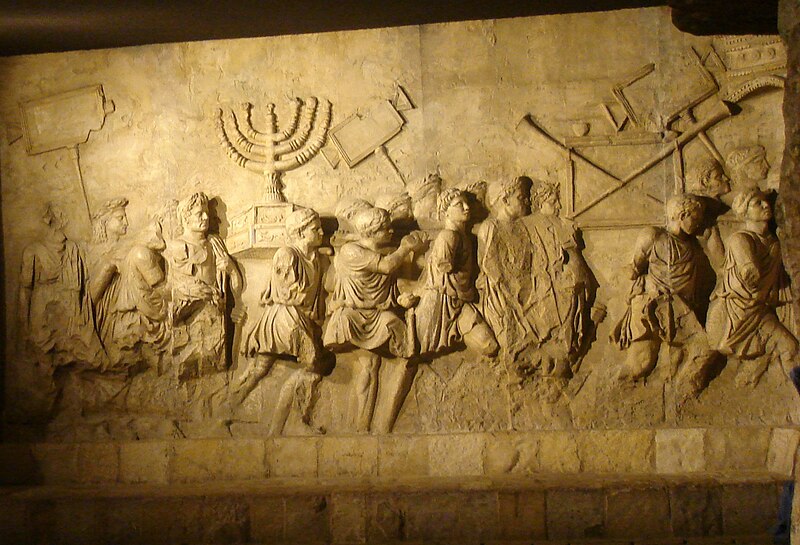 Wonder if the lad from west London would like to challenge Getty in court and tell them their photo is a fake ?

When faced with facts create lies and answer like a fool , numbnuts does it all each time every time

When cornered become pedantic ( Goss eg) When faced with facts create lies and answer like a fool , numbnuts does it all each time every time