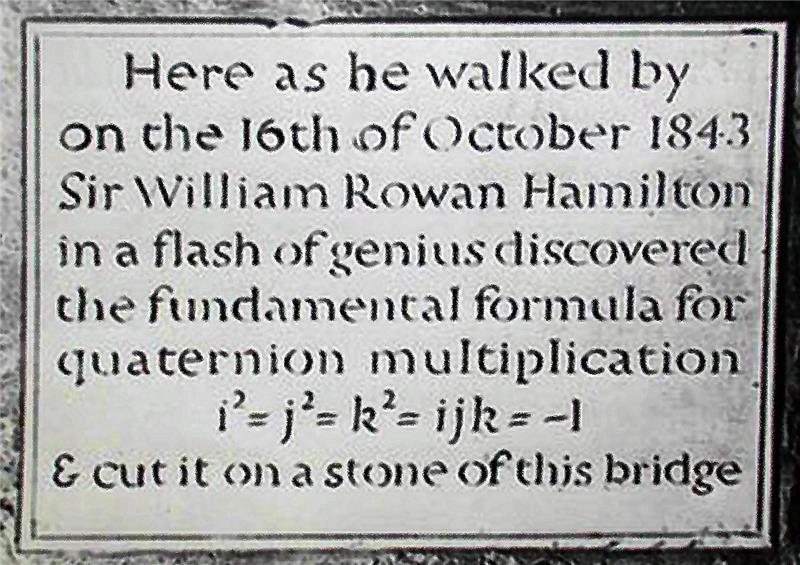 The formula for quaternions scratched by William Rowan Hamilton on Broombridge, Cabra, 16 October 1843.

"ONE SMALL SCRATCH FOR A MAN, ONE GIANT LEAP FOR MATHEMATICS"

On a bright Monday morning, on 16 October 1843, the world of mathematics was changed forever. William Rowan Hamilton was walking along the banks of the Royal Canal in Dublin with his wife, Helen. As he passed Broombridge in Cabra, he had a flash of inspiration. Hamilton described the ‘eureka’ moment in a letter to his son some years later:

‘Although your mother talked with me now and then, yet an undercurrent of thought was going on in my mind, which gave at last a result, whereof it is not too much to say that I felt at once an importance. An electric current seemed to close; and a spark flashed forth, the herald (as I foresaw, immediately) of many long years to come of definitely directed thought and work . . . Nor could I resist the impulse—unphilosophical as it may have been—to cut with a knife on a stone of Brougham Bridge as we passed it, the fundamental formula . . .’

Thus Hamilton’s mind gave birth to a strange new system of four-dimensional numbers called ‘quaternions’. In a nineteenth-century act of minor vandalism, Hamilton scratched his mathematical creation on the bridge.

The quaternions are Hamilton’s most celebrated contribution to mathematics. Two-dimensional numbers had played a significant role in two-dimensional geometry and in solving practical problems in two dimensions. Hamilton had been trying to extend his theory of two-dimensional numbers to a theory of three-dimensional numbers (also called triplets). He hoped that these triplets would provide a natural mathematical structure for describing our three-dimensional world. He had difficulty finding a suitable theory of triplets (we now know why—it’s impossible!). Then, on 16 October 1843, his mind gave birth to quaternions as he walked along the banks of the Royal Canal. In this moment of revelation he realised that if he worked with number quadruples and an unusual multiplication operation he would get everything he wanted. He named his new system of numbers ‘quaternions’ because each number quad-ruple had four components.

Hamilton had created a completely new structure in mathematics. The mathematical world was stunned by his audacity in creating a system of numbers that did not satisfy the usual commutative rule for multiplication. (This is the rule in arithmetic which says that it does not matter in which order you multiply two ordinary numbers, e.g. two times three equals three times two. The quaternions did not satisfy this rule.) This did not bother Hamilton because this is what usually happens in nature. For example, consider an empty swimming pool and the two operations of diving into the pool head first and turning the water on. The order in which the operations take place is important!

Hamilton has been called the ‘liberator of algebra’ because his quaternions smashed the previously accepted notion that any useful algebraic number system should satisfy the rules of ordinary numbers in arithmetic. His quaternions opened up a new landscape where mathematicians could feel free to conceive new number systems that were not shackled by the rules of ordinary numbers in arithmetic. One could say that modern algebra was born on the banks of the Royal Canal in Dublin. I suppose one could also say that it was ‘one small scratch for a man, one giant leap for mathematics’! Hamilton’s creation of quaternions is commemorated by a plaque which was unveiled in 1958 by the taoiseach, Éamon de Valera, who was a mathematician himself and a fan of Hamilton. De Valera paid homage to Hamilton by scratching the quaternion formulas on his cell wall when he was in Kilmainham Jail in 1924.

An ode to science, carved from sand and water All Good until the tide comes in!