"First, use of a variable magnification optic would not differentiate a M4A2 from a M4A1, because the same type of sight can be mounted on the M4A1 (as evidenced by the cited purchase for use on M4A1)."

The LPVO is not changing the gun, but it is moving toward the ultimate goal of upgrading the M4A1 beyond its current capabilities; in fact its the most expensive part of the 'M4A2' concept. Once they realize that the issuing of the $1000 optic is not enough, and that the rail must also be free floated (as SOCOM and the Air Force have found) its likely they will follow suit with a $300 free float rail.

Ultimately its a meaningful step toward the M4A2 in that it shows the Army recognizes the need to retain and improve the M4 despite the NGSW program.

"Second, the M27 is not a M4A2.  Even if you want to consider it such, the M27 has been in service for a decade, the Army has been well aware of its existence, yet has not been moved to develop a M4A2."

It's not the M4A2, in the sense that its not a M4. But their M27 will have the most important features of the desired M4A2 - a free float handguard + cold hammer forged barrel + LPVO.

They are also investigating higher capacity magazines, which makes me hopeful they may discover the 40rd mag master race.

"And third, when has the Army ever been influenced in making decisions on development and acquisition of infantry rifles, by what the Air Force does?"

You've been catching me slipping a lot lately, so I'm thrilled to be able to return the favor ;-) :

"In 1958, the Army's Combat Developments Experimentation Command ran experiments with small squads in combat situations using the M14, AR-15, and another rifle designed by Winchester. The resulting study recommended adopting a lightweight rifle like the AR-15. In response, the Army declared that all rifles and machine guns should use the same ammunition, and ordered full production of the M-14.[26]

However, advocates for the AR-15 gained the attention of Air Force Chief of Staff General Curtis Lemay. After testing the AR-15 with the ammunition manufactured by Remington that Armalite and Colt recommended, the Air Force declared that the AR-15 was its 'standard model' and ordered 8,500 rifles and 8.5 million rounds.[26] Advocates for the AR-15 in the Defense Advanced Research Projects Agency acquired 1,000 Air Force AR-15s and shipped them to be tested by the Army of the Republic of Vietnam (ARVN). The South Vietnam soldiers issued glowing reports of the weapon's reliability, recording zero broken parts while firing 80,000 rounds in one stage of testing, and requiring only two replacement parts for the 1,000 weapons over the entire course of testing. The report of the experiment recommended that the U.S. provide the AR-15 as the standard rifle of the ARVN, but Admiral Harry Felt, then Commander in Chief, Pacific Forces, rejected the recommendations on the advice of the U.S. Army.[26]

Throughout 1962 and 1963, the U.S. military extensively tested the AR-15. Positive evaluations emphasized its lightness, "lethality", and reliability.[26] However, the Army Materiel Command criticized its inaccuracy at longer ranges and lack of penetrating power at higher ranges.[52][46]
...[Message truncated]
View Full Message
0
ReplyToggle Dropdown
Msg 10 of 1993 to stancriststancrist
In reply toRe: msg 7

As I recall, the Army did not want the M16.  It was forced to adopt the M16 by the Secretary of Defense.

My recalling is the same.

The USAF lobbied the Sec Def for issuing the M16 as a replacement for the M1/M2 carbines instead of the Army M14, the M16E1 was put into Air Force service, and when it was clear that the M14 was a dead end the Sec Def forced the Army to adopt the M16 which was already in service in the Air Force...

0
ReplyToggle Dropdown
Msg 15 of 1993 to stancriststancrist
In reply toRe: msg 14

Funny how the lethal range of the 5.56 mm weapons keeps going up and down depending on the point the authors want to make

Despite the much better performance claimed for the M855A1, it's now down to 300 m again...

0
ReplyToggle Dropdown
Msg 16 of 1993 to autogunautogun
In reply toRe: msg 15

"Funny how the lethal range of the 5.56 mm weapons keeps going up and down depending on the point the authors want to make

These type of articles are typically short on technically accurate info.

Not too many are going to delve into BC, frag range, etc.

0
ReplyToggle Dropdown
Msg 17 of 1993 to nincompnincomp
In reply toRe: msg 5

Breacher attachment, with a little sharpening. ;)

0
ReplyToggle Dropdown
Msg 18 of 1993 to FarmplinkerFarmplinker
In reply toRe: msg 17

Or follow the British lead, and use a bayonet with hollow handle that fits onto the flash suppressor. 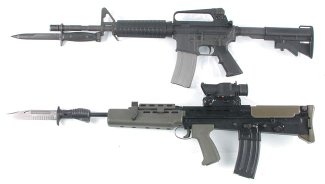