Development of a succesor to the Marder? Isn' t  that already developed Puma?

But all snarkiness aside, I suspect their reasoning for this allocation of funding has something to do with a) Ukraine's airforce having lasted about a single day (maybe a week, if you stretch the definition of the 'force' part of the word) since the start of hostilities

I'm not sure how accurate that assessment is, or how much it would factor into NATO.

At the start of hostilities Ukraine had a pretty small, dated airforce (talking strike aircraft):

And they were still flying combat sorties a month into the war:

And months into the war, Bayraktar TB2 drones were still destroying Russian ground targets despite having the flight performance of a WW1 era biplane.

Looking at the war in Ukraine, I'd say the enormous consumption of ground to ground weapons, and widespread destruction of ground based vehicles and weapons, would all put more of an emphasis on restocking a land based force.

-NATO as a whole has a shitload of planes

-German domestic industry specializes in the production of world class ground based weapons - not so much aircraft.

Of Germanys 100 Billion fund, majority of funds will go to the Air Force, with more money spent on the Navy then on the Army. Fitting for a mostly landlocked country with a massive land war going on next door....

Several points:
The Reuters report is simply not correct or exact.
Of course there is a Marder replacement in the Puma. Some of the 100 billion will be used to purchase more Pumas. Because currently its not planned to replace all Marders... for lack of funding. A replacement for the Fuchs APC is going to be purchased. If this will be more Boxers we will see.
There are a lot more projects that are being funded. The munition stocks will be replenished. New clothing, boots, body armor and helmets for more than one billion will be purchased. Less spectacular than new aircraft and comparable cheap but vital never the less. ~20 billion will be invested in C3 (very simplified).
The larger chunks that are allocated to the branches are allocated by need. Since the air force needs new aircraft and these are hideously expensive they get the largest chunk. Ships are also expensive and are needed, second largest chunk. The army has more or less up to date equipment. What it really lacks is basics like clothing and communication. Which is allready adressed. All major army programms allready have resulted in new vehicles so they just have to buy more which is rather cheap.

It is also of extreme importance to be aware the the things that are purchased are NOT in the slighest way influenced by the Ukraine war. Its simply an attempt to get the back lock dissolved. All the stuff the money is spend on is on the list for conciderable time now. Its just a chance to compensate for three decades of underfunding.

From a strategical viewpoint Germany needs a navy more than an army. Its sourounded by allies. At the same time it has massive foreign trade and is dependent on resource imports. The freedom of shiping and access to all markets are vital intrests for Germany. This requires a strong navy.
The air force is expensive and the most technological critical. Yes the Tornados are not as old as Leopard 2 but they are conciderable less usefull in comparison. Its far easier to upgrade ground vehicles so they stay competative compared to aircraft. While Russia made lots of noise with Armata etc it currently seems its vapor ware. To take on T-90 and older Leopard 2 is perfectly adequate. A replacement is in development. Some of the 100 billion will fund this as well but we only talk about a couple of millions so its barely ever mentioned in the press. This replacement most likely will materialise in about 10 years. So its behond the scope of the current funding.
Before someone asks: Increasing the size of the military or army, for example reactivating of forming or tank battalions or more brigades is out of the question. Its not limited by funding but by available personell. Since the draft has been abolished the German military has been understafft. Concideably actually. The understaffing is not because there are no open positions or because there is no money for personell its because there are no people willing to join. It is simply unrealistic to expect this to change.

Furthermore most of these investments are long term. So the immediate situation has rather little relevance to the planing. A spread of the Ukraine war onto NATO territory is extremly unlikely. Also once the situation is resolved there will be a new status quo with a high chance of "back to busines as usual". Not 100 % as befor but close to it. The war in Ukraine is seen as a temporary problem by most of the decision makers in Germany.

2
ReplyToggle Dropdown
Msg 345 of 443 to schnuersischnuersi
In reply toRe: msg 344

Ships are also expensive and are needed, second largest chunk.

and the F126 which, capability-wise seem to be a rejig of the F125, with optional modular ASW capability which sounds a lot like "if we have to, I guess".

0
ReplyToggle Dropdown
Msg 346 of 443 to grayliongraylion
In reply toRe: msg 345

and the F126 which, capability-wise seem to be a rejig of the F125, with optional modular ASW capability which sounds a lot like "if we have to, I guess". Germany needs an attitude adjustment.

My knowledge of things naval is rather limited. But I also from looking at stats get the feeling that German firgates tend to be underarmed.

I have no data. But from my personal experience and observation this effect seems negectable. Most of the reserves are people around my age with previous service time and experience. It has been more than two decades since my active service time. There are rather few "reserve only" volunteers. The vast majority are people who left active service and changed to reserve service. The reserve also is very top heavy. Serving as reserve officer is pretty attractive. While being reserve enlisted or NCO less so.

0
ReplyToggle Dropdown
Msg 347 of 443 to schnuersischnuersi
In reply toRe: msg 346

Its a really nice museum and an intresting ship. We had a good time there.

The tw0 120 mm twins alone have more throw weight per minute than basically any modern warship.

Yes but this is nothing new and unrelated to the current funding or lack thereoff. It has gotten very quite about the whole program some time ago. There also has been no funding of the 100 billion packages allocated to this. As far as I know not to smallarms at all.
New small arms in general and rifles in particular are high on the priority list currently. The whole thing has been a political matter and was directly linked to the Secretary of defense then in office. Which has changes twiche now. Including a change in party in charge. So its mostly dead in the water.

0
ReplyToggle Dropdown
Msg 351 of 443 to schnuersischnuersi
In reply toRe: msg 350

So its mostly dead in the water

It seems like the 'Zeitenwende' is getting off to a rocky start, at least as portrayed in English language coverage I've found.

On a related note, while looking up articles on German defense allocations, I came across this (looks to me?) updated G36: 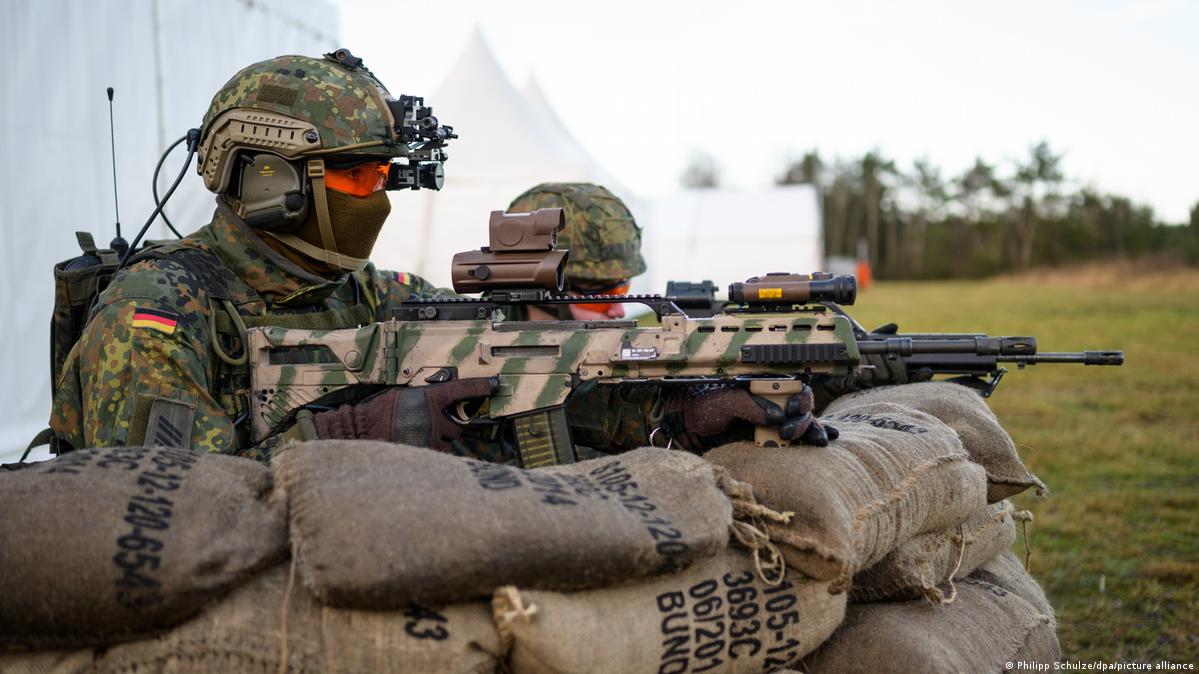 If so thats pretty close to the updated G36 I had thought they should have gone with vs a new rifle.