According to the reports of the Serbian daily Politika Vojska Srbije (VS, Serbian Armed Forces), they are to be retrofitted with weapons caliber 6.5 x 39 mm. For this purpose, it is planned to increase the order for the Zastava M19 Modular Automatic Rifles of this caliber.
The M19 carbine made its debut at the Partner 2017 / Photo: MO Serbii

The M19 entered service this year. So far, the 41st Pešadijski Battalion (41st infantry battalion) of the 4th Brigady kopnene vojske (4th Brigade of Land Forces) has been retrofitted with new weapons. The M19 carbine, like the M-70 and M21, is based on the Kalashnikov system. It is equipped with the Teleoptik-Žiroskopi M-20 red dot sight and the NT35 thermal vision sight. The 6.5 mm caliber cartridge used by the M19 is new and based on the 6.5 mm Grendel sport and hunting ammunition. The cartridge was adapted to firing semi-automatic and automatic weapons.

The production of standard and Armor piercing 6.5 mm ammunition has recently started at the Prvi Partizan Užice ammunition plant. Retrofitting the infantry with new weapons will increase the fire ability by increasing accuracy, effective firing range and effectiveness in hitting targets. According to the Serbian Ministry of Defense, the increase in firepower of a soldier armed with the M19 is 30-50%

According to the official website of the Prvi Partizan company, it is already producing the new 6.5x39 mm ammunition, in at least three versions, two of which are obviously intended for hunting. In this case, the characteristics of the produced cartridges in any case give an idea of ??the new ammunition.

Serbian ammunition A-484 (FMJ BT) and A-485 (HP-BT) are made in the performance of BT - Boat Tail, which literally translates as "boat tail". These bullets have a distinctively recognizable shape - they have a noticeable tapered taper at the rear. This design provides bullets with a high initial velocity, and also stabilizes them in flight. Such bullets lose speed less throughout the flight path and are less blown away by the wind.

According to the statements of the official website of the Ministry of Defense of Serbia, the new machine guns with 6.5 mm ammunition are able to effectively engage group and individual targets at a distance of up to 800 meters. It is reported that the servicemen of the Serbian army have already had the opportunity to make sure of the quality and effectiveness of the new weapons and ammunition for them in the range conditions, primarily at the shooting ranges. It is noted that the Serbian servicemen appreciated the reliability, accuracy and ergonomics of the new rifle complex.

Created by Prvi Partizan, the 6.5mm cartridge is conceptually based on the Grendel 6.5mm sport shooting and hunting cartridge. The ammunition has a similar design, ballistic solutions and functional characteristics, while being adapted for use in automatic and semi-automatic weapons. According to the Serbian Ministry of Defense, the Serbian military used two new types of cartridges at the training grounds: with a 6.5-mm all-metal bullet and a brass sleeve, and with a 6.5-mm armor-piercing bullet and a brass sleeve.

Interesting departure from the usual round choices. Certainly an improvement over the 7.62x39 but inferior to the 5.45x39 as long as one stays with non fragmenting projectiles.

The performance does seem a bit high if this round really is the same size as a Grendel. I wonder what the chamber pressure and barrel length are? And how exactly does the round differ from the Grendel? Possibly, basing the gun on the Kalashnikov system has removed some of the performance restrictions which hold back the cartridge in the AR-15?

0
ReplyToggle Dropdown
Msg 4 of 120 to autogunautogun
In reply toRe: msg 3

The maximum chamber pressure of the 6.5 Grendel was dictated by the diameter of the standard AR15's bolt and barrel extension.  The developers wanted to use as many AR15 parts as possible. In fact, some early Grendel bolts were modified 5.56 units.  Since the Serbs are using a different weapon system, they would not need to follow the same constraints.  It will be interesting to see if they changed the design.  Another issue is the specifications of the brass cartridge.  The case walls are not very thick near the base and that section tends to deform (bulge) if the pressure is raised much beyond CIP or SAAMI levels.  It is entirely possible that the case is slightly different.

0
ReplyToggle Dropdown
Msg 5 of 120 to autogunautogun
In reply toRe: msg 3

According to Prvi Partizan specs its the same as 6.5mm Grendel i just think its just new nomenclature for military purposes. PPU probably made more Grendel ammo than anyone else either under their own brand or as a supplier to other brands. They will just add some AP bullets to the mix

I have my doubts about how much they will be issuing the 6.5mm  , i believe most will be issued only with the 7,62x39 barrel .At least till Arabs buy and 6.5Grendel ends up in Libyan warzone.

In 2017 they had these slides on the vid at that time they said it was 6.5x38.7 developed on Grendel basis ,but my bet is it was always stock 6.5Grendel Another point, to start nit-picking, is that the CIP/SAAMI chamber of the 6.5 Grendel has an unusual two-stage tapered throat.  The first part of the taper, if I recall correctly, is only 1/2 degree per side.  The shallow angle means that the distance from the case mouth to the beginning of rifling changes significantly with small amounts of reamer wear.  In practice, this has been a problem with mass production so much that a simplified chamber with only a single 1.5 degree taper, sometimes called a Grendel II, is used by some suppliers.

The stated reason for the two-stage taper was increased accuracy when using bullets of radically different ogive shapes.  Since Serbia has control over the bullet shapes to be used by its military, it may decide to use a chamber shape that is more friendly to mass production.

I suspect the Serb military has plenty of people who "know" "you can't trust them little bullits", just like the rest of the world.

Interesting departure from the usual round choices. Certainly an improvement over the 7.62x39 but inferior to the 5.45x39 as long as one stays with non fragmenting projectiles.

What is your basis for that claim?  Do you have gel tests for 6.5 Grendel with steel-core projectiles configured/constructed like 5.45 bullets?

0
ReplyToggle Dropdown
Msg 9 of 120 to autogunautogun
In reply toRe: msg 3

The performance does seem a bit high if this round really is the same size as a Grendel. I wonder what the chamber pressure and barrel length are?

The velocity figures in the article are for 6.5 Grendel loadings listed on the Prvi website:  https://www.prvipartizan.com/rifle_ammo.php 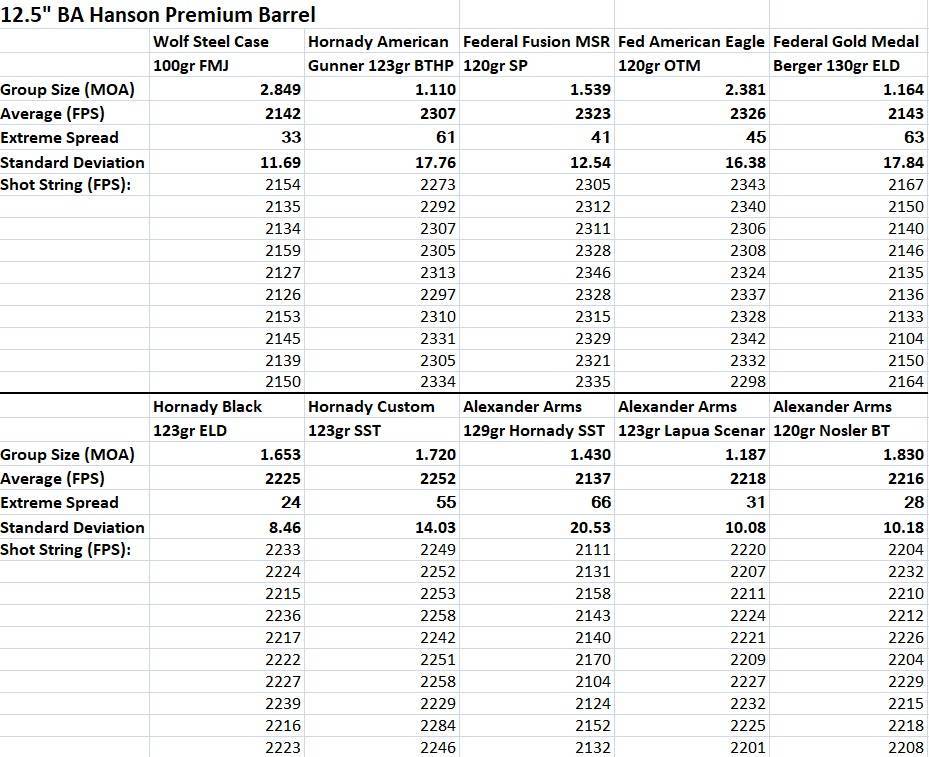 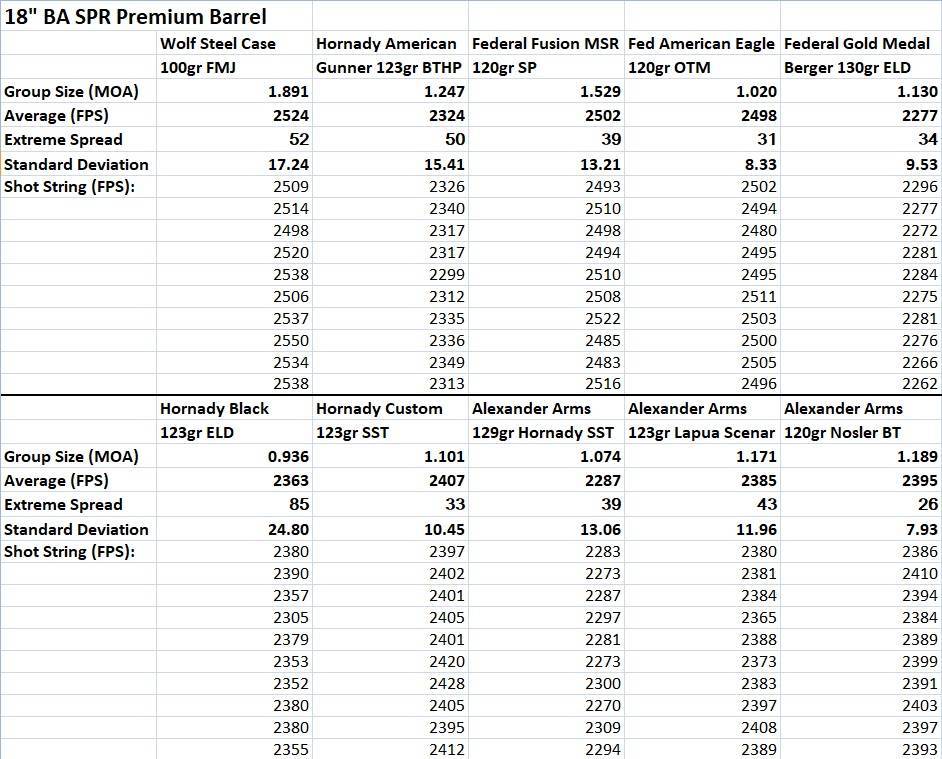 This would give a very short and handy carbine that still has very respectable long range performance relative to its size, and without the awful blast associated with other SBR's due to the lower chamber pressure and wider swept bore.

No doubt a purpose designed new cartridge could perform better. But of existing cartridges 6.5 Grendel seems the most capable SBR (sub 14.5") barrel cartridge.