Latest 16-May by Refleks

Latest 15-May by EmericD

Iron Dome shooting down barrage of rockets from Gaza

Latest 12-May by poliorcetes

I did not say that they should make an actual S-tank. I said they should copy the features as far as practically possible.

Its main feature is not that it has a fixed gun.

The main feature is that it is very well armored, with an advantageous shape, while still being relatively light.

A number of those advantages stem from having a fixed gun. The fixed gun removes the need for internal space to move the gun about in and facilitates an autoloader,  both of which allow for a smaller protected volume, which in turn contributes to a lighter weight for a given protection. It also removes weak points that would be necessary for a flexible gun.


And while the gun is fixed on the S-tank, it may not necessarily be that on a ww-2 version, but to keep the protection level as high as possible, without adding weight unneccessary, the gun could be fixed permanently to a very low "ball-turret", mounted on the rear of the tank, letting the whole turret traverse and elevate a few degrees, to be able to aim accurately.

Doesn’t this modification simply make it a turreted tank? An oscillating turret? This was tried post war with some success but it never caught on. How many degrees is “a few” in this case? because enlarging the turret to permit a useful amount of movement is going to rapidly make it into a regular tank.

The coarse aiming could be done by turning the tank towards the target, and use either hydraulics, electro-motors, pneumatics, or even being mechanically driven by a gearbox, or even a small engine, to raise or lower the hull.

Are the control systems of the late ‘30s going to be up to that? What is the movement relative to? Two pieces of hull, or are you integrating the actuators into the suspension?

0
ReplyToggle Dropdown
Msg 138 of 255 to RovingPedantRovingPedant
In reply toRe: msg 137

So I can see being able to give it a decent amount of elevation and depression fairly easily as well as perhaps 2-5 degrees traverse each direction off the central axis for essentially fine positioning especially if your throwback guy was willing to explain pepperpot style muzzle brakes as well as some sort of fairly simplistic over balancing gun mount that "cheats" some of the recoil runout and etc (basically functioning as a very rudimentary soft recoil gun cradle) that can essentially move the trunnion up and down a little bit as well as push the gun trunnion into a forward overbalanced position before the shot is fired (pushing the gun further out or bringing it in as required to get the shot) which is tensioned by strong springs in both directions and anchored into a pseudo turret basket.

It would to an extent channel some of the recoil energy straight down into this turret basket turn table deal sitting on the hull floor like a mortar base plate that your TC and gunner/loader seats or positions are also on.

Essentially you'd be using a human loader and carefully designed ammo stowage racks etc which may not be ideal to grab from at the full +-5 degree traverse but doable.

Sort of like an oscillating or cleft turret but nowhere near as ambitious.

You'd have a larger frontal weak spot where the gun opening is and the ergos could kinda suck but it would be doable.

I'm attaching images of an m113 project and the strv103 as a reference.

Note: I'm assuming a 3 man ideal 4 man absolute max vehicle here with the driver up front somewhere in his own driver position. I'm not sure how you'd do the commander roof hatch or etc but there's a few ways you "could do it".

0
ReplyToggle Dropdown
Msg 139 of 255 to roguetechieroguetechie
In reply toRe: msg 138

Char Bi had a one axis mount and hydrostatic suspension, but they also had torsion bars as well and generally more advanced engineering in regards to AFVs. In practice the Brits would have been better off staying with what they know instead. Something really basic like a 77 mm TD in 1940 or so on the smaller hull and in the turret of their Cromwell replacement and then the 20 pounder TD and for their Churchill to replace the 17 pounder by about 43 to maintain the overmatch needed to deal with the potentially far better FW nazi tanks.

Oh yeah man I was just spitballing an allied stug for fun because they're just plain cool looking imo.

Any actual practicality would have been incidental to it being cool.

I do think that if you could get something that could do -5/+20 degrees of elevation and -5/+5 degrees of "traverse" combined with a nice HV gun whose shells weren't too heavy and broadly laid out like I spoke about you could potentially have something pretty light and heavily armored while still being small and cheap as hell.

This is something that would probably be pretty useful to have in a pinch.

Also, if you've got a throwback you could do some fun stuff with the armor scheme to make it perform like it has substantially more armor than it actually does.

Think of it like a super sized universal carrier not a baby tank and it makes even more sense.

Unlike a purely fixed gun stug it'd be quite a bit better at firing on the short halt and etc.

By no means a war winner but meh it'd look extremely cool. 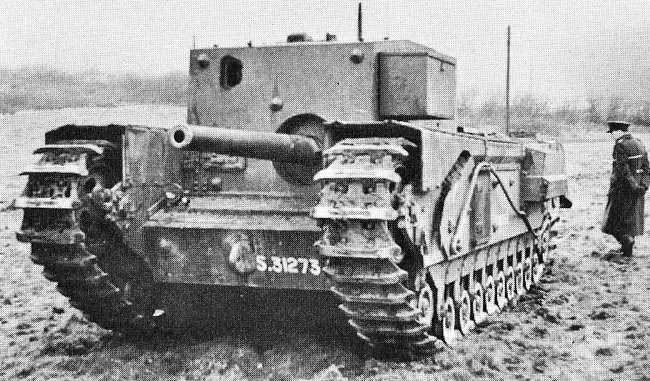 But without the ridiculous internal mantlet that largely nullifies the tanks armour.

It wasn't an internal mantlet as such, it was a ball mount, which gave it a +15/-10 elevation range, and probably a reasonably decent lateral movement as well.

It wasn't an internal mantlet as such, it was a ball mount, which gave it a +15/-10 elevation range, and probably a reasonably decent lateral movement as well.

And guaranteed the penetration of any round that hit that 2 foot circle. Read up on the NA 75s for what people actually thought of internal mantlets on the Churchill.

Oh, I know about the problems of internal mantlets.  They were the bane of British tank design and users.

The Tortoise also used a ball mount, but it had a bloody great amoured collar attached to the barrel that protected the gap in the amour needed to get the amount of movement out of the gun.

Ethanol upping the octane to 95 or 100 seems like a too good to be true solution for the period and well worth standardising it as the fuel type used by the UK military pre-war.
It would probably benefit the nazis more that the Brits but then they have their own traveller so that should not really be a consideration.

The construction of the lion with individual cylinders makes it an excellent candidate for the various sub engines needed for the various pre war contraptions like Crusader. As noted previously I think Crusader should be a utility hull for mounting engineering and SP artillery on and not a tank in it's own right, that should be left to the Churchill. The British army will need the experience with heavier tanks from a logistical and strategic mobility point of view. There is no reason why the Churchill can't be the British T-34 and grow from 24 to 30 tonnes over the war period.

that potential is also needed because the other traveller will revamp their tank production and their armour can be expected to be much better armoured and more effective than historically.