Could a descendant of M193 be a good PDW cartridge?   Ammunition <20mm

See the 1958 British document I quoted above:

“It is expressly forbidden to employ arms, projectiles or material calculated to cause unnecessary suffering … such … as … irregularly-shaped bullets.”

This wording has disappeared from later versions, possibly because it is no longer thought to be an issue. There was a fairly short-lived fad for spoon-tipped bullets to encourage rapid overturning on impact, but no-one seems to be promoting it now, as far as I can tell.

0
ReplyToggle Dropdown
Msg 25 of 230 to poliorcetespoliorcetes
In reply toRe: msg 22

I would tempted to think about a spoon-tiped 30 grain

What are the drawbacks of spoon-tip bullets?  There must be significant negative aspects to the design, seeing as how no army uses them. 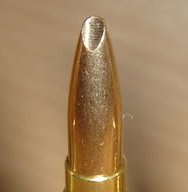 0
ReplyToggle Dropdown
Msg 26 of 230 to stancriststancrist
In reply toRe: msg 21

They probably thought anyone with common sense would know that.  Lawyers should've known better

I don't disagree with your point, Stan, but lawyers have this tendency to stick to the letter of the law. As you say, most of them are probably unaware that the classic  "FMJ" has an open base...

0
ReplyToggle Dropdown
Msg 27 of 230 to stancriststancrist
In reply toRe: msg 23

"Upon n what info do you base that?  It seems to me like it would be just the opposite"

It's my understanding that tumbling is based on a rearward weight distribution. On impact, the heavy part of the bullet wants to move forward, inducing tumble.

This rearward weight distribution is present regardless of velocity or energy - it's built into the bullet. So the bullet will tumble independent of a specific velocity.

Whereas fragmentation / expansion requires a certain amount of energy / velocity in order to deform the metal of the bullet to induce that effect.

Im on my phone, but there's even some 9mm loads by Fort Scott that tumble pretty rapidly at 1300fps. Likewise 'Po Boy Special' has a ton of 7.5" AR testing where many loads (77gr comes to memory) tumbles well at below frag velocity.

0
ReplyToggle Dropdown
Msg 28 of 230 to stancriststancrist
In reply toRe: msg 25

What are the drawbacks of spoon-tip bullets?  There must be significant negative aspects to the design, seeing as how no army uses them.

IIRC Dr. Voss was one of the principal proponents here. I would assume that it is really problematic for medium range as it bleed speed quicker. Besides, spoon tip was a measure to increase terminal effects of a really small 4.6mm bullet. As Nathaniel pointed out 5 years ago

The 4.6x36mm represents a minimalist approach to assault rifle ammunition. Designed to reduce weight and recoil at virtually all cost, lethality was to be provided by the unique nose shaping, designed by Voss. The relatively blunt nose was cut at an angle by a concave depression, which ensured that even a straight-on low-angle-of-attack hit on the target would cause the bullet to rapidly upset and yaw, dumping its energy into the target and (hopefully) affecting a stop. This was an innovative solution to a problem that hadn’t yet been described: Fleet Yaw. However, as the concept has evidently not been recently evaluated, it is not known how good a solution it offers to that only recently-described problem.

One of the things that must be noted by my readers is that the graphs below are especially hypothetical for the 4.6x36mm HK/CETME. I have heard suggestion that the spoon tip design caused the rounds to spin down and lose stability quickly after 300m, so their performance beyond that distance may be even poorer than the graphs below indicate

However, if effective range is defined as 200m (a lighter bullet more subject to wind drift and with less momentum). it should be an agreeable trade-off

Besides, an interesting tip:

…to provide a rifle bullet wherein the tip of the bullet is of an asymmetric shape. When this bullet strikes the target, forces are generated which accelerate the bulet inclination.It is stil another object of the present invention to provide a rifle bullet wherein the turning moment produced by the inclination accelerating forces increases and the bullet inclination is produced more rapidly when the distance between the bullet center of gravity and the bullet tip is greater. It is possible to increase the effect produced by the bullet tip asymmetry through the backward displacement of the bullet center of gravity.Voss further believed that by increasing terminal velocity with the subtly asymmetric bullet tip he called the Löffelspitz or “spoon tip,” he could reduce caliber without losing lethality, and without having to “underspin” the bullet, which was widely understood to be Armalite’s approach to small caliber lethality.

Now, such 35 grain, 2/3 polymer + 1/3 steel core wouldn't need to be "underspined" and, with a terminal velocity of more than 970 m/s, it would start to tumble more deeply and violently, helped by the CG position caused by the core.

If the shooter needs more range or penetration capabilities, he could use SS109 or other Hague compliant ammunition. But for PDW, close range-first uses, maybe a 21th Löffelleichtspitz (??) bullet would offer a better service than actual SS109

0
ReplyToggle Dropdown
Msg 29 of 230 to poliorcetespoliorcetes
In reply toRe: msg 28

I've done quite a bit of analysis on very light rounds like this. They are always very disappointing. They bleed velocity badly. Also, nothing described here provides any performance improvement over M855, even from short barrels, and several disadvantages.

1
ReplyToggle Dropdown
Msg 30 of 230 to QuintusOQuintusO
In reply toRe: msg 29

Disappointing as a GP round? intended to be precise at 400m or retain enough energy?

IF this Löffelleichtspitz ? Leichtlöffelspitz? bullet forces tumbling both by spoon tip and by CG position and at close distances it has a remarkable velocity, it should deliver the energy it has at a very short distance from the target surface and very quickly. Since the energy would be the same than SS109, the combinations of the factors mentioned above would result into a better performance compared with nowadays european PDW cartridges and with already adopted weapons. Such weapons could still use SS109 for other situations, but would serve better to users in second echelon and behind.

As a side note, I'd add that Spanish Army had bought a small number of HK MP7 (yeah, we live in a HK monocultive). The user will carry a small package that will be useful only as PDW or for CQB. A small package that uses very expensive ammo. I am pretty sure that M855A1 is totally out of reach for Spanish armed forces...

If they're indeed comparable in length then it should be fairly straight forward to replicate the 7n6 tumbling in a 5.56 load. Albeit with inferior BC.

0
ReplyToggle Dropdown
Msg 32 of 230 to gatnerdgatnerd
In reply toRe: msg 31

Many years ago I photographed a 77gr SMK next to the 7N6 round.

1
ReplyToggle Dropdown
Msg 33 of 230 to autogunautogun
In reply toRe: msg 26

I don't disagree with your point, Stan, but lawyers have this tendency to stick to the letter of the law. As you say, most of them are probably unaware that the classic  "FMJ" has an open base...

I didn't say they're unaware that FMJ has an open base.  I said the lawyers in 1899 probably only looked at loaded rounds.

When visually examining complete cartridges, the jacket "entirely covers" the exposed portion of an FMJ, but not JSP/JHP.

The "sticking to the letter of the law" in equating the open base of FMJ to the open tip of JHP is a relatively recent practice.

Prior to about 1990, the US JAG considered hollowpoint match projectiles like the Sierra MatchKing to be unlawful for war. 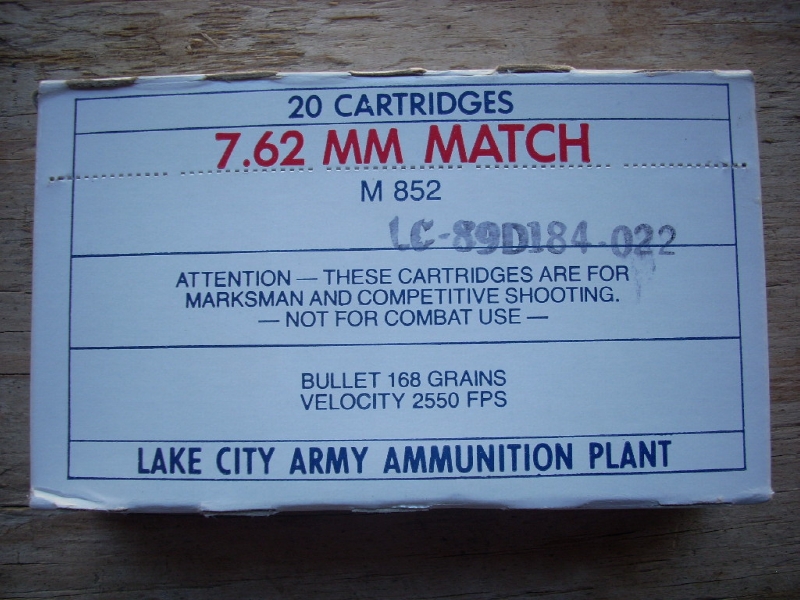