Looks like continued interest in the SMASH FCS. We could either see the SMASH fielded outright, or see the underlying technology potentially employed in the NGSW-FC or future optics. Given the proliferation of small drones, it's possible that counter drone ability will become an important feature of small arms/optics for infantry combat, rather than being the exclusive concern of AA platforms.

Video of testing in Netherlands: 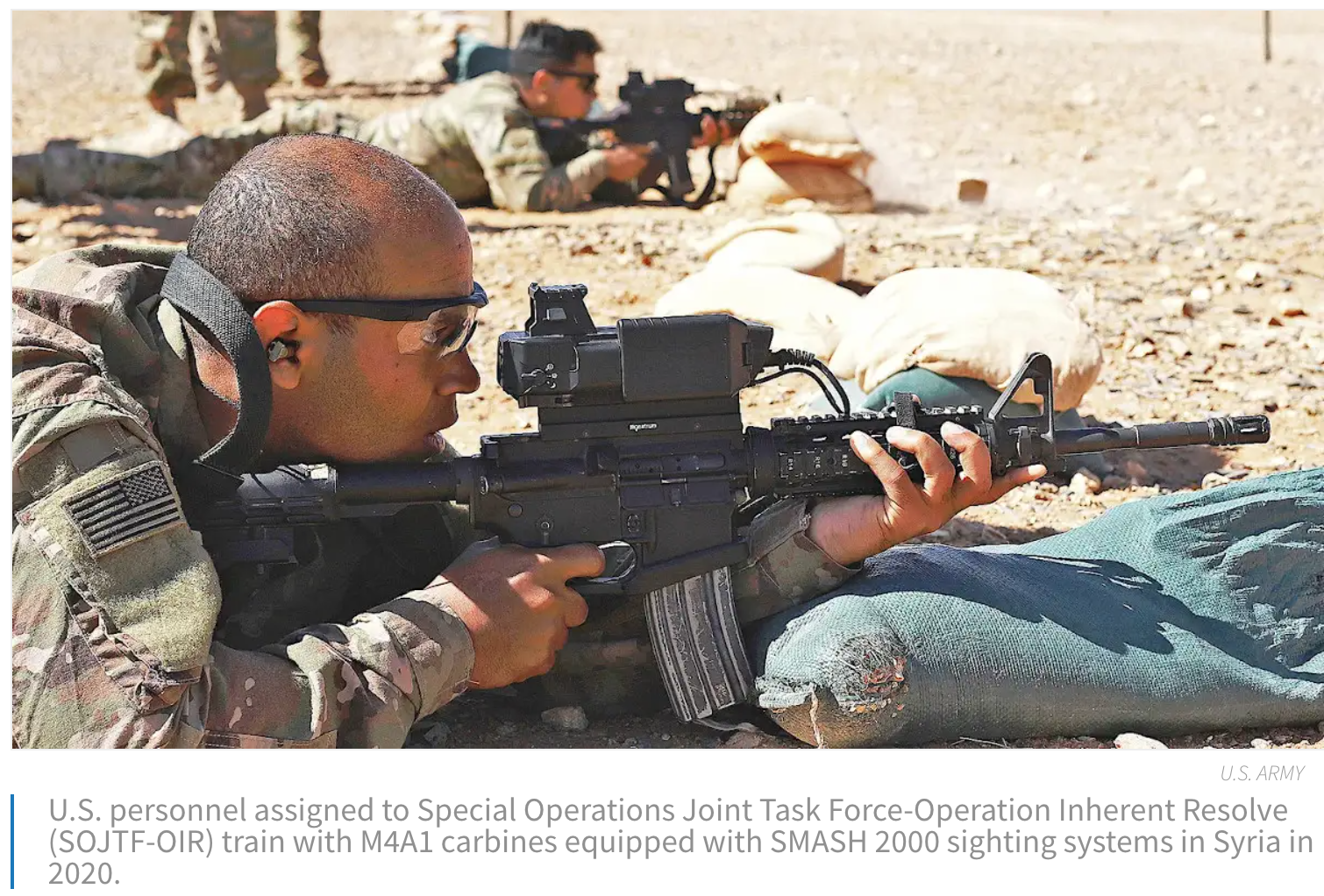 Reports of small drones flying over or near sensitive U.S. airspace, such as the site occupied by the U.S. Army's Terminal High-Altitude Area Defense (THAAD) missile defense battery on Guam, have only been increasing. The potential risks unmanned systems pose to critical civilian infrastructure and other non-military targets continue to grow, as well.

These threats have also been expanding into the maritime domain. It's hard not to see a series of still-unexplained incidents involving drones swarming U.S. warships off the coast of Southern California back in 2019, which you can read more about in this past War Zone feature, as likely being one specific factor behind the Navy's new CRADA with Smart Shooter.

With all this in mind, Smart Shooter's SMASH 2000, or other systems derived from its core technology, are clearly of growing interest to the U.S. military, as a whole, as part of efforts to establish new layers of defense against small drones — as well as making its personnel shoot more accurately, overall.

"This collaboration aims to perform joint integration and evaluation of Smart Shooter’s technology with weapons and ammunition currently supporting the U.S. Navy’s mission. With an increased hit probability for small unmanned aerial systems (sUAS) and increased engagement range, Smart Shooter’s SMASH technology has demonstrated the potential to increase the Navy’s ability to engage sUAS at the individual level — using existing weapons and ammunition in inventory," according to the firm's press release.

The smash 2000 is one of the most interesting optoelectronic additions to rifles going right now with the exception of the safran CTAM.

The safran CTAM is like any of a bunch of other peq style laser and illuminator combos except it's laser is capable of functioning as a coded laser for target designation for any weapon that requires laser designation.

Roll CTAM like capability into smash 2000, give it to weapons squads and you may actually buy yourself a fighting chance against some of the more vexxing modern threats.

2
ReplyToggle Dropdown
Msg 3 of 18 to roguetechieroguetechie
In reply toRe: msg 2

I do admire the capabilities of modern FCS and think they can bring much improvement to hit probability.

But each time someone switches on his laser, he gives away his exact position. This reminds me of a British Army officer in his presentation at a Shrivenham symposium: "You emit, you die." He was referring to the situation in Ukraine.

We are are presented all those gadgets in a way as if all possible opponents would have neither reconnaissance nor countermeasures. This attitude could result in very ugly surprises. In particular the Russians have  a decades long tradition of studying application of laser technology. I would not be surprised if the Chinese followed a similar approach.

The situation is in my view similar to radar in its early years, when nobody dared to mention that the emissiion could be turned against its user.  Or when tanks were equipped with powerful floodlights (visible or infrared).

1
ReplyToggle Dropdown
Msg 4 of 18 to JPeelenJPeelen
In reply toRe: msg 3

"You emit, you die." He was referring to the situation in Ukraine.

I totally get this for Radar. Using radar for AA and counter battery fire opens one up to weapons designed to home in and attack radar from long range. A previously hidden AA installation suddenly becomes a target for long range precision fires once it switches on its radar (also why I think using IRST sensors for AA may be a future goal for short range air defense.)

But I question how much 'if you emit you die' would really be for small arms, given that they are close range, line of sight weapons?

For example, if troops are zapping inbound armed quadcopters, then presumably the enemy already knows the troops are there - hence the sending of quadcopters to attack them. And of course, blasting them out of the air also announces a hostile presence.

Is the emission of low powered IR laser light really more noticeable to modern sensors than the troops own FLIR/Thermal signature?

And of course, once rival infantry units are engaged and shooting at eachother, clearly knowing each others general locations, does the periodic use of a laser range finder for zeroing a FCS really add to their visibility?

0
ReplyToggle Dropdown
Msg 5 of 18 to JPeelenJPeelen
In reply toRe: msg 3

Oh yeah, the post emissions era is going to be real interesting!

They're working on it though.

0
ReplyToggle Dropdown
Msg 6 of 18 to roguetechieroguetechie
In reply toRe: msg 2

The safran CTAM is like any of a bunch of other peq style laser and illuminator combos except it's laser is capable of functioning as a coded laser for target designation for any weapon that requires laser designation.

Thats a really cool system. I had wondered whether they would ever create a weapon mounted laser designator, that way a scoped rifleman could laze a target for something like a drone strike, or perhaps supporting fires from something like APKWS.

Along those lines, it would be interesting if the laser could also pair with a GPS unit, so that the rifleman's GPS cordinates and the laser distance and angle from the target could be combined, so that the targets precise GPS location could be determined for calling in fires.

0
ReplyToggle Dropdown
Msg 7 of 18 to gatnerdgatnerd
In reply toRe: msg 1

On the one hand, SMASH 2000 is really promising. It includes a bunch of really interesting capabilities, some of them unprecedented and apparently quite mature. I assume that it has not been proposed as FCS por NGSW mainly for risk management reasons. M1186 is going to be enough risky by itself. But surely either this or its sucessor is going to be a true FCS for the future rifle and MG, specially when it will be coupled with other systems in the battlefield, either IVAS googles or the video feed from other elements of the immediate network. Anyways, a FCS-controlled trigger is going to happen and be fielded.

However, it is quite silly as a C-sUAS system. The human operator is just a too big bottleneck. Every single demo of the system has been shown against a hovering sUAS and mainly against DJI phantom. Not against a quick sUAS.

A human operator needs to:

1. detect the sUAS and its path
2. point to it
3. Designate it using SMASH 2000 designator
4. fire after a fire solution is achieved.

the probability of shoot down a 5" sUAS flying at 100kph and at 10m of height is quite low with this.

The only kinetic solution should be a RWS one. Machine sensor, machine pointing, machine fire. Preciselly like 30x113 Koenisberg product you mentioned in another thread

1
ReplyToggle Dropdown
Msg 8 of 18 to poliorcetespoliorcetes
In reply toRe: msg 7

The only kinetic solution should be a RWS one. Machine sensor, machine pointing, machine fire. Preciselly like 30x113 Koenisberg product you mentioned in another thread

The 30x113 is one option. Another I thought would be interesting would be a 'micro CIWS' using a scaled down version of the 20mm Phalanx used on ships, employing a 5.56/7.62 minigun.

In all cases, detecting the drones without constantly using Radar is likely to be an issue, for the 'emit you die' reasons JP mentioned.

1
ReplyToggle Dropdown
Msg 9 of 18 to gatnerdgatnerd
In reply toRe: msg 8

1. A Gatling shooting hundreds of bullets at a shallow degree doesn’t sound very safe for friendly troops down

2. an AESA emitting is not easy to be located

3. Computer vision + audio could be as important as radar for locating small and quick flying objects whose propellers cry like banshees

0
ReplyToggle Dropdown
Msg 10 of 18 to poliorcetespoliorcetes
In reply toRe: msg 9

1. A Gatling shooting hundreds of bullets at a shallow degree doesn’t sound very safe for friendly troops down

Thats likely to be a problem with any 'hard kill' anti drone weapon. Bullets, airbursting cannon shells, lasers... any of those are going to be super dangerous when fired at shallow angles / low to the ground. Similar to the danger posed to dismounted infantry by APS 'Hard Kill' systems on tanks designed to destroy ATGMs - its basically like a EFP mine going off at head height.

A semi passable solution may be to have some sort of 'about to fire' alarm ring out from the AA/CUAS system telling troops to hit the deck prior to it firing.