Is this an SOP during peactime thing? Are these systems so unpredictable that they can't be left activated without endangering friendlies? Are naval commanders so concerned about their EM emmitions?

Yes, absolutely.  CIWS never goes into AUTO unless you're on a range or have confirmed missiles inbound.  (and confirmed can be hard, hence Stark's f'up in the Gulf.)

Yes.  See, for example, USS Jarrett in the first US-IRaq War.  They were in company with USS Missouri during a missile attack.  Their CIWS was in auto and it accidentally engaged a chaff cloud from Missouri and put four rounds into the other ship from a range of 5km.

Yes, sometimes.  Probably not in Moskva's case, though,  It sounds like they were busy with another problem (the TB-2 drone) and the might not have seen the Neptune attack coming at all.

0
ReplyToggle Dropdown
Msg 482 of 933 to BruhMomentoBruhMomento
In reply toRe: msg 477

If it works it ain't stupid

Excellent history and analysis of the war so far, and where it is likely headed:

There are a number of interesting technical details on weapons, making it relevant to this thread as well as general knowledge.

One interesting point is the number of western components in Russias PGM's; with sanctions in place replacing these components in the supply chain, or smuggling them into russia covertly, will become key to any resupply of these munitions for Russia.

In regards to ATGMS, these were credited as being highly effective, but Artillery was still cited as the primary killer:

In regards to RU equipment; 30mm cannons are cited numerous times in the article. 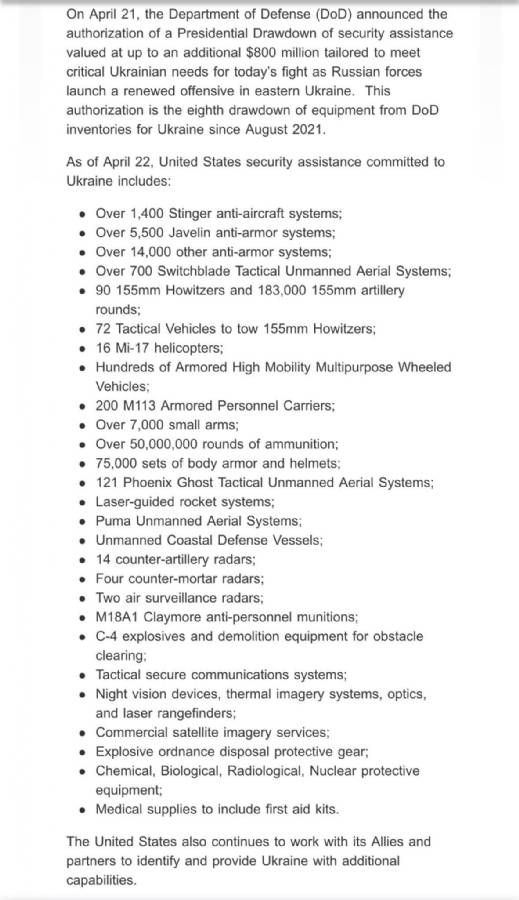 0
ReplyToggle Dropdown
Msg 485 of 933 to schnuersischnuersi
In reply toRe: msg 479

Another factor, electric primers. My cousin told me when they needed to load a Phalanx, all radios and radars were shut off; they could detonate primers if radiating.

0
ReplyToggle Dropdown
Msg 486 of 933 to FarmplinkerFarmplinker
In reply toRe: msg 485

Another factor, electric primers. My cousin told me when they needed to load a Phalanx, all radios and radars were shut off; they could detonate primers if radiating.

This sounds to me like a serious shortcoming and design flaw.

0
ReplyToggle Dropdown
Msg 487 of 933 to schnuersischnuersi
In reply toRe: msg 486

Phalanx ammo is electrically primed, just like most (all?) aviation gun systems.

0
ReplyToggle Dropdown
Msg 488 of 933 to DavidPawleyDavidPawley
In reply toRe: msg 487

Phalanx ammo is electrically primed, just like most (all?) aviation gun systems.

So is the ammo for the 120 mm smoothbore... but tanks do not have to turn off their radios.
There also was no concern with close by radar from SPAA.
Aircraft don't switch off systems when they are carrying ammo for guns.

So from my point of view there are two possibilities. Either the safety meansures are way to cautios and interfere with the sensible operation of the system or the ammo for Phalanx is more sensitive than others and this would be a flaw.

Javelin operators in the Ukrainian military take out a Russian tank and then scoot out. https://t.co/hrunDKUbtP