The chicoms actually have some attack drones that absolutely make sense at squad level.

They're quite literally flying hand grenades and quite small, could be made smaller, and will pretty easily eventually get to a point where you can make two fit in a single rifle mag pouch

0
ReplyToggle Dropdown
Msg 52 of 60 to roguetechieroguetechie
In reply toRe: msg 51

The chicoms actually have some attack drones that absolutely make sense at squad level.

That may be, but I did not say there are no drones that make sense at squad level.  I said only that the video in Msg 46 does not show the potential of a "squadcopter" because the drone is not being operated by a member of the squad.

They're quite literally flying hand grenades and quite small, could be made smaller, and will pretty easily eventually get to a point where you can make two fit in a single rifle mag pouch

Got link?  I just did a brief search, but found nada.

0
ReplyToggle Dropdown
Msg 53 of 60 to stancriststancrist
In reply toRe: msg 52

This year they have a whole crop of hololens like AR systems that are confirmed able to interface with their extremely diverse drone pool.

On that note, they also have managed to build "swarm friendly" sub 1 pound baby aesa's that can talk to each other and build very large distributed virtual synthetic apertures.

How much of this actually gets fielded and used?

I don't know and I don't care because the important thing here is they've shown that it's not only possible but pretty cheap to do so someone else will field if they don't.

There's also one or two ways they could make the flying grenades discharge the payload then detonate in a reasonable form factor.

I can't necessarily guarantee anything I bring up on the battlefield though, this isn't why I'm bringing this stuff up.

The important thing is it's possible and we need to start looking at how to do similar ourselves and defend against these things.

They're also showing some pretty advanced offensive uav's as well as other things this year. It's definitely a show to keep an eye on

0
ReplyToggle Dropdown
Msg 54 of 60 to roguetechieroguetechie
In reply toRe: msg 53

Thanks.  IMO, the CH-817 is too big (Jane's accurately describes it as "backpackable") for squad level.

It looks even bigger than the 40mm grenade-carrying quadcopter that gatnerd posted a while back. 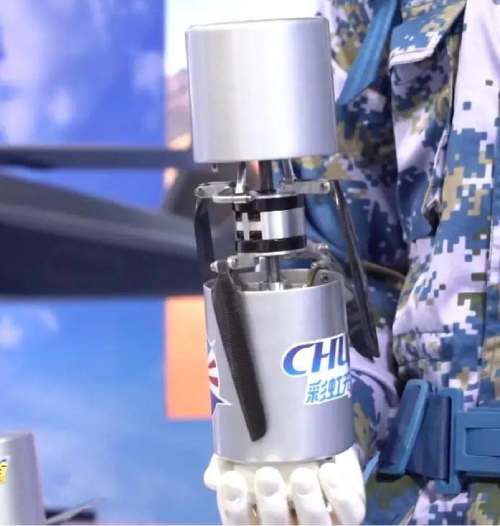 For squad use, I really think they need to get the size and weight down to something more like this: 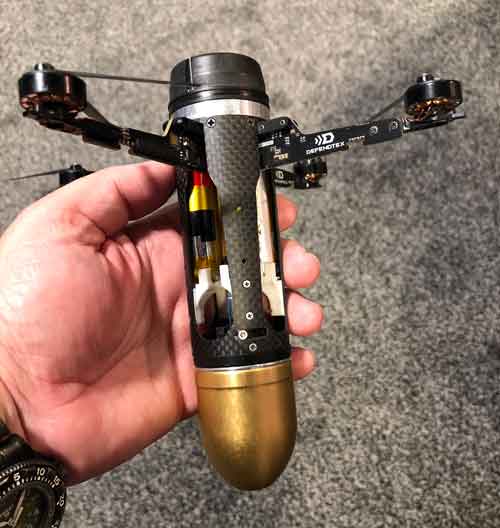 0
ReplyToggle Dropdown
Msg 55 of 60 to stancriststancrist
In reply toRe: msg 54

Yes I agree on the ch-187 itself... It's actually sized the way it is for a couple interesting reasons which I'll cover after I say a couple other things.

So the gatnerd grenade launcher munition sized quadcopter combined with the duo coaxial copter rotor of the ch187 combined with a miniaturized feature of 187 along with m320 and other newer 40mm launcher's compatibility with "medium range" and extra long munitions and you could pretty easily package up something about double the length but similar in weight or just a bit heavier but with a much lighter powder kicker charge to keep recoil manageable gives you under barrel launchable prompt offensive munitions.

Now let me tell you about two of the features of the Chinese version.

2. It can also be mortar launched.

So we can pretty easily bring the size down to a double to a big longer than 40x46 grenade length packages guys could carry.

AESA's use software mostly to be LPI / LPD and as far back as the future combat system era there were proposals to give all the fcs vehicles etc a "multifunction emitter panel" which is just an aesa configured to do also do LPI LPD commo.

So imagine each guy in a squad that doesn't have a UGL carries 2-5 "drone grenades" and your designated squad drone operator if you're a marine squad has something dji drone sized with hyperspectral imaging units on a gimbal and your 1 pound AESA...

Your drone operator can now punch signals through to up to 5 or 6 grenade drones simultaneously even in a comms denied environment to feed targeting etc data to the grenade drones which have very limited onboard sensor packages to make them cheaper and able to be fired in the dozens.

Very quickly you wind up with some pretty serious distributed firepower with a scary magazine depth for a squad of guys on foot.

My big concern is that western armies don't have interest in new systems that don't come with an up front price tag that starts with a B.

I worry that low hanging fruit like this will be picked up by our opposition while we spurn it for more costly less effective stuff...

A thing we're already seeing pretty visibly btw with roketsan baryatkar etc innovating much faster than us and just fielding stuff to see what works rather than waiting for a hold plated procurement program.

0
ReplyToggle Dropdown
Msg 56 of 60 to roguetechieroguetechie
In reply toRe: msg 55

Fascinating stuff.  You're way above my knowledge level in this subject.

0
ReplyToggle Dropdown
Msg 57 of 60 to stancriststancrist
In reply toRe: msg 56

I've sorta had a bunch of time to organize my thoughts and think things out because I work out of town up to 6 weeks at a time and am all by myself at night just chilling.

It's given me lots of time to follow up on stuff and do a bunch of reading before bed.

Plus my new job has presented me with lots of challenges and opportunities to think stuff out in detail.

It has helped me be more productive than I have  been in years.

I even get to design and build stuff for work sometimes which Is both immensely rewarding and sorta has my brain switched on so it comes to me easier now.

Was searching for news about future ADF small arms development.

But it looks like there probably won't be much for a couple of years.

P.S.  There is one item of perhaps some interest:  An article in SSD that shows a SIG MCX Spear which was displayed at Land Forces 2022.

This version -- which is presumably aimed at the ADF -- differs from the XM5 in having a slightly longer barrel and different muzzle device.

0
ReplyToggle Dropdown
Msg 60 of 60 to stancriststancrist
In reply toRe: msg 59