A "bullet hose" would certainly be most effective at close range.  Operators would probably be taught to move the weapon in small circles while firing (not unlike the movement I was taught to use when fighting a fire with a firehose).

That does not seem like a viable option to me, if only because it violates the KISS principle.  The needed diameter of the circular movement would vary according to the target distance.  To attain proficiency with such a technique would require a far greater training ammo allotment and much more range time than infantry riflemen have ever had.

The difficulty in hitting an under-protected area is why I have expressed some doubts about infantry rifles being effective against opponents with good body armor.  I just don't know how realistic it is to attempt to defeat modern (and future) chest armor with an infantry rifle that resembles what we use now.  It would seem that relatively large explosive rounds with proximity fuses might be needed to assure enough shrapnel for disabling hits.

I like the idea of HE airburst, but it also has a serious flaw as a potential solution to the body armor problem:  It is not a viable option for engagement ranges closer than the round's arming distance.

I know that there have been a number of discussions on this site about having a "golf bag" of different weapons available for different circumstances, but it seems that the weapons needed to fight well armored opponents are different that those needed for more traditional infantry battles.

The "golf bag" or "arms room" concept has been implemented by special forces, but SF operators are able to shoot thousands of rounds per year in training.  That has never been the case with line infantry.

What would your thoughts be on an improved CBJ round in a p90 magazine. Obviously it's a bullet hose but what about accuracy.  I think if they lowered the sabotage to 6mm with a larger .18 bullet....it keeps it totally concetric

And as for the 6.8, could it's energy be improved with a polymer plastic bearing surface...in terms of less friction

What would your thoughts be on an improved CBJ round in a p90 magazine.

I doubt that effective range would be anywhere near acceptable to the military.

And as for the 6.8, could it's energy be improved with a polymer plastic bearing surface...

I have no idea. 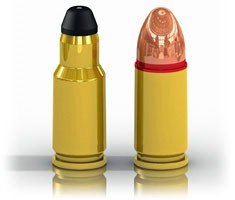 No its an enlarged version of the cbj.

basically a grendel case wjich easily does 5500 wih 31 grain bullet. Im wonderig about things like noise and just being unpleasant to shoot.

Seeing buffmans recent vid of the tungsten 338 failing to penetrate,  im convinced that hyperspeed is a better approach

Damn I cannot embed them here

How did you embed it?

It's that little button (light blue above) next to images, which is for embed links.

You get the embed link from twitter, them copy it into that thing. First time I've ever used it but it works well.