I still have some doubts. The cyclic rate is awefully high. As a German its hard to imagine i would ever say this but 28 rds a second is a lot for such a small weapon. This means a burst limiter is required...

Yes.  The developers realized the high cyclic rate made full-auto impractical.  Although it's difficult to discern in the photo, the SCAMP selector allowed only 3-rd burst.  No full-auto.

I am also intrestin in the reliability.

Can't help you with that.  Only one prototype was built, and AFAIK it was never subjected to military reliability testing.

The ballistic data for the round I have found on the internet is also somewhat vague. But it seems penetration was not a major concern in developement.

That's understandable.  The enemy that the US military was fighting in 1969 did not use body armor, nor did the Chinese and Russians.

The Russians only began to implement the general issue of body army armor a full decade later, when the 6B2 armor was introduced.

Hmm, I make it more - 874 m/s, but you point stands of course. BTW this is aluminium on a steel core.

As regards the energy, yes, interesting, isn't it. The one thing about this that gets me is the muzzle pressure wich leads to a truly earthshattering kaboom.

Would you be interested in playing with this some more?

Did searching of YouTube for video of MP9 hit probability.

This is the best I found; max target distance only 10 yards. 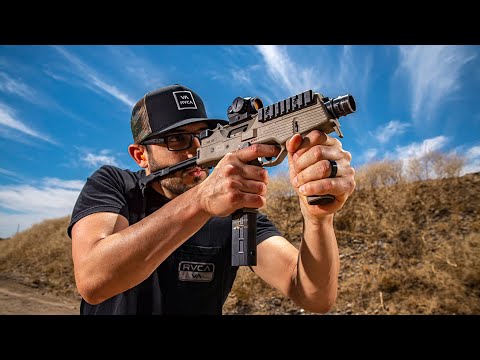 With a 5-inch barrel and a collapsible length of just 11.9 inches, the nimble, compact Brügger & Thomet (B&T) MP9-N reinvents the class of 9mm submachine gun...

0
ReplyToggle Dropdown
Msg 728 of 975 to stancriststancrist
In reply toRe: msg 707

Less recoil would help, but the flatter trajectory won't make a bit of difference for most soldiers

Its hard to point to with like a ballistics chart, but I've found my FN FsN shockingly easy to fire off hand at 100yd with just iron sights - much easier then a 9mm.

Its really as close as it comes to a laser pistol.

With the latest variant equipped with a RDS (or a proper RDS and stocked PDW) hit probability will likely be noticeably better then 9mm.

The reduced Time of Flight may also help increase chances of a hit for moving or temporarily exposed targets.

stancrist said: Less recoil would help, but the flatter trajectory won't make a bit of difference for most soldiers

Its hard to point to with like a ballistics chart, but I've found my FN FsN shockingly easy to fire off hand at 100yd with just iron sights - much easier then a 9mm.  I once shot a beer bottle at 80yd with mine, and was able to hit a gallon milk jug at 150yd within 3rds.  Its really as close as it comes to a laser pistol.

2
ReplyToggle Dropdown
Msg 730 of 975 to stancriststancrist
In reply toRe: msg 729

BTW any idea as to why the high dispersion? Recoil?

0
ReplyToggle Dropdown
Msg 731 of 975 to grayliongraylion
In reply toRe: msg 730

Maybe, but I'm not certain, as I've never shot a 5.7 pistol.  Since gatnerd has firsthand experience with both calibers, perhaps he can offer better input.

0
ReplyToggle Dropdown
Msg 732 of 975 to stancriststancrist
In reply toRe: msg 731

Sorry, I meant the MP9

0
ReplyToggle Dropdown
Msg 733 of 975 to grayliongraylion
In reply toRe: msg 732

Yes, the dispersion of the MP9 might be due to recoil.

Note the tester's comments about the semi-auto TP9:

As I've said numerous times, and echoing Tony's comments, where the PDW makes the most sense is for the 'HE lobber.' A infantry guy whose primary job is employing man portable HE weapons (40mm smart grenades, 84mm CG, ATGMs, MANPADS, etc.)

As you know, the Marines do not share that view.  The new 15-man squad has every member equipped with the M27 rifle, including the guy who is tasked with toting the 84mm CG.

Interestingly, I happened to watch a USMC video (filmed late last month, I think) of a combat readiness evaluation in which the CG teams are armed with the M4 carbine, not the M27.