The AAI rdf LT was essentially the precursor to the M8 that was for a marine program iirc and had an ares 75 or 90mm CT autocannon originally slated to fire at 120 rpm and an ability to fire at +80 degree elscao in a turret bookended by two 4 packs of either Hydras or rbs 70 missiles.

If I recall correct the last version carried two pods of four Stinger SAMs each.
70 mm rockts IMHO make little sense for a 75 or 90 mm main gun. The rockets add nothing the gun can not do.

1
ReplyToggle Dropdown
Msg 11 of 23 to grayliongraylion
In reply toRe: msg 8

it does look rather interesting.

And that would be a ood starting chassis too.

Keep in mind the vehicle and concept are more than 30 years old now. At best it can give very basic inspiration.

Part of the RDF LT concept was to have very thin armor. The vehicle was supposed to move all the time and be hard to hit. This way it should not need armor.
The rapid fire 75 mm was directly linked to this concept. It should fire 3 round bursts that would achieve the same accuracy as a single shot 105 mm (then standard MBT armament) fired from a standing tank only from the fast moving LT.

These concepts are rather... bold. Allready back then. Nowadays they are unsustainable. Especially with modern FCS the idea of being hard to hit because of high speeds is outright rediculous. The concept to saturate an area of opperation with lots of light tanks so losses can be sustained while the LTs punch above their weight class also is not sustainable. Survivability trumps everything nowadays.

While the 75 mm ARES gun has comparale penetration with APFSDS of its time to the 105 L7 with APs its no where near the level of power required today for AT work.

The concept would have to be reworked conciderably.

0
ReplyToggle Dropdown
Msg 12 of 23 to grayliongraylion
In reply toRe: msg 3

What I like about the 3105 is the maximum angle of 42° which gives it rudimentary indirect fire capability.

I don't think that is a good idea.
To be effective at indirect fire it takes a lot more than just being able to raise the gun up.
A high velocity piece also if pretty bad at most indirect fire missions.

For indirect fire a purpose build vehicle is the better choice IMHO. Direct fire capability is secondary in this case.
Somthing like this is an intresting concept: 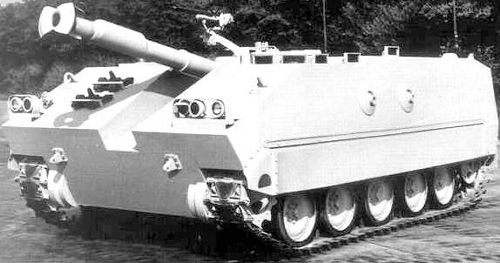 0
ReplyToggle Dropdown
Msg 13 of 23 to schnuersischnuersi
In reply toRe: msg 9

With most 90 mm guns its more or less the same. Allthough there are lightweigh 90 mm guns that are not optimised for KE around. The HE shells of these guns are pretty powerfull. Traditionally the sweet spot for direct fire support purposes ist 75 mm/3 inch. The shells are powerfull enough to deal with pretty much every kind of field fortification and have a good area of effect.

again with the indirect fire option? or what about Cockerill 90 LP?

0
ReplyToggle Dropdown
Msg 14 of 23 to grayliongraylion
In reply toRe: msg 13

again with the indirect fire option? or what about Cockerill 90 LP?

In theory any gun that can be raised enough can be fired indirect. For this the gun elevation doesn't have to be high.

The problem is with a single fixed charge only one trajectory is possible (two if the gun can be raised above 45° but most of these will be of limited use for a medium velocity piece). Which limits the possible beaten zone. The Cockerill 90LP fires its HE shell at 700 m/s. So its comparable in its trajectory to WW2 era 90 mm guns. These are usually a little faster but the difference is not that big.

To really be indirect fire capable a gun needs an elevation of 45° and more plus adjustable charges. But this directly interferes with the usefullness in the direct fire role. Its also more complicated, requires different FCSs, need a link into the artillery communication network and different crew training.
For a vehicle that is intended for direct fire this would result in conciderable more expensive system. While most of the investment is seldom used. There also is the conflict of mission problem. If the vehicle is linked into the arty network it will get fire missions all the time. Which will interfere with the crew observing the surounding area and look for targets as well as keep a close linke to the elements its supposed to give direct support to.

1
ReplyToggle Dropdown
Msg 15 of 23 to schnuersischnuersi
In reply toRe: msg 14

cool, thanks. About 105mm: Challenger reputedly has a rifled gun b/c of HESH. So the UK clearly sees/saw a necessity for this in infantry support. Challenger 3 seems to be pivoting to anti tank. Reversely, I don't see the point of an anti tank gun for an FSV. France OTOP moved from 90mm LP to 40mm CTA for the role.

Thinking about the Boxer and its famed modularity. Why is the RCH still so incredibly top heavy high? It looks positively absurd.

0
ReplyToggle Dropdown
Msg 16 of 23 to grayliongraylion
In reply toRe: msg 1

So I am wondering whether a FSV turret would not be better off with a 105mm gun.

Well the US 'Mobile Protected Firepower' Light Tank is reportedly going to have a 105mm cannon:

Looking at 105mm shells, warhead weight and HE fill look pretty comparable to the 70mm rocket M229 '17 pounder' which has 17lb warhead with 4.8lb HE fill.

To me, if the goal is basically 'vehicle lighter then a tank that provides multi shot direct fire ability with tank like destruction' a 'Mini MLRS' firing 70mm makes a lot more sense.

A big gun requires a big heavy vehicle, as well as cost and complexity. Its also a harder system to make Unmanned - necessitating armor to protect the human gun operators.

Rockets solve that issue. They're light and recoilless, and fired by simple electrical impulse.

The result is one can have a Jeep sized unmanned vehicle capable of delivering 14-24 shots of laser guided 70mm, ~equivalent to the same number of 105mm shells from a light tank.

1
ReplyToggle Dropdown
Msg 17 of 23 to grayliongraylion
In reply toRe: msg 15

About 105mm: Challenger reputedly has a rifled gun b/c of HESH

That is not really the caseor only part of the story. The story of the new NATO tank gun that was supposed to replace the 105 mm L7 and became the 120 mm smoothbore is complex and not particulary nice.

HESH can be used by non rotating or slow rotating projectiles. The British Malkara missile used a HESH warhead. There are HESH or HESHish warheads for rifle grenades and LAW/RPG type weapons.

Challenger 3 seems to be pivoting to anti tank

Not really. At least not any more than Challanger 2 befor. The rifled gun island solution is not sustainable. I also would argue that a modern HE frag with settable fuse is more effective in the infantry support role than HESH.

France OTOP moved from 90mm LP to 40mm CTA for the role.

More precise the moved from the 90 mm F4 to the 40 mm CTA plus MMP ATGMs. This most likely offers improved AT as well as FS capabilities. Yes the single shot HE throw weight is lower but the ROF and ammo carried is considerable higher.

Why is the RCH still so incredibly top heavy high? It looks positively absurd.

Because the RCH module is so tall. The Boxer chassis is allready tall. Its also not an optimised purpose build chassis like that of the G6 or the DANA.

The RCH module is fully automated and seld contained. I am not sure if mounting it on Boxer is a good solution.
I think its better mounted on a Truck chassis:

1
ReplyToggle Dropdown
Msg 18 of 23 to schnuersischnuersi
In reply toRe: msg 11

Yes, the concept would have to be reworked fairly heavily for sure, and I agree on the rockets though with apkws dagir and ultra high velocity guided 70mm rockets all being a thing they might still be useful.

One of the things I like provisionally about the idea of dusting RDF LT off Is that while it's original version was fairly lightly armored etc it was built in an era where electronics and several other things were huge and inefficient compared to now.

What this gives you is lots more space inside once you switch out all the legacy stuff to MOTS or near MOTS modern substitutes which will weigh less and take up less space.

Chances are you'd use half that space and weight to add additional capabilities you'd want in a modern version, and half on additional protection. Combined with stripping out legacy protection and materials to use better more efficient modern equivalents etc and you have something that's now got enough room and base layer protection to run ARAT2 ERA tiled and an APS with shockingly little fuss.

You take the 90mm version of the ares autocannon, build a chassis on Bradley automotives etc shoot for 30-35 tons and wind up with a pocket medium that's stanag 6+ frontally holds 3 guys has an APS and era and can run with mbt's to provide heavy armored SHORAD etc on the move.

Both options are possible and with the right teams involved could be done quickly with a minimum of fuss and expense.

Either would provide you with a shockingly good vehicle relatively simply and quickly.

0
ReplyToggle Dropdown
Msg 19 of 23 to schnuersischnuersi
In reply toRe: msg 14