Agree with you 100% on 6.5 mm Creedmoor. An excellent calibre with better range and terminal effectiveness than 7.62 mm NATO in a lighter package and less recoil. The 120 grain EPR-style bullet developed for it is superb. I don't know why the US Army didn't just develop this further. The velocity could easily be increased to 1,000 mps for better body armour defeat in a standard brass cartridge.

Actually I am a bit surprised that 6.5 Creedmoor was chosen over .260 Rem , a design that is far better suited for automatic weapons and also has a bit more boiler room and can push bullets to higher speeds. I guess 260Rem range of offerings was just too small.

The 6.5 mm synergies re: re-barreling 7.62 mm weapons were just too good to pass-up.

Sorry you had to go to Merkel / Haenel instead of FN Herstal. I really like the SCAR. It is my pick of non-AR15 assault rifles.

Our guys have ScarH in 13, 16, and 20 in barrel configurations and these are fine rifles especially once fitted with nonfolding SSR stock( transforms the weapon) but for 6.5CM we couldn't get any not to mention they are getting a bad rep .

*But lets just say that when they tested bunch of guns HK won out , but FN has claws in our military so FN rep and manufacturing contractor made a call and SCAR H was bought instead of HK . Haenel is like evolved HK in many ways.

You can only imagine how deep the claws of FN reach in our Military when you consider we have a FN2000 as a main battle rifle. 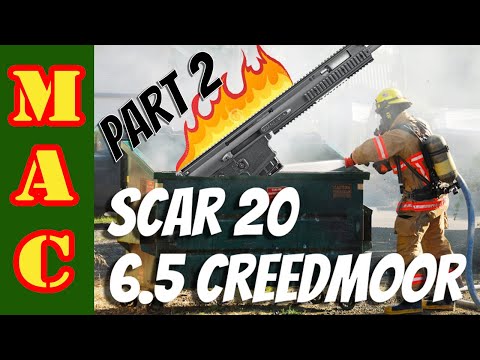 Aside from  the buttstock Haenel CR6.5 is probably a superior weapon anyways.

The SCAR popped-primer problem is simple to explain.

First, many commercial loadings of 6.5 mm Creedmoor use soft primers, because these are cheaper than hard primers. Since SCAR was designed for military spec hard metal primers, this was always going to be an issue.

Second, a specific SCAR requirement was the over-the-beach-test and therefore the firing pin was designed to ensure it connected positively with the base of the primer in the presence of water.

Third, FN America quality standards seem to be less than its European HQ. It released the 6.5 Creedmoor before it was fully ready. Unforgivable. FN America needs to get a grip of this issue, not least in communicating better with its non-military customers. Overall, I think the SCAR is an unmatched 7.62 mm battle rifle, especially the SCAR 20 / HPR. It has matured very well over the last decade and the extent to which it is used among SF units is a testament to this. (BTW It won the French tender, but its bid was disqualified due to an inexperienced sales executive.)

SCAR is not done yet. It's just getting started.

The velocity could easily be increased to 1,000 mps for better body armour defeat in a standard brass cartridge.

I'm skeptical of that.

These were the Quickload specs I had done awhile back. These were with a lead core bullet; I suspect velocity would be a bit lower with a EPR due to reduced case volume from the longer projectile.

Actually I am a bit surprised that 6.5 Creedmoor was chosen over .260 Rem , a design that is far better suited for automatic weapons and also has a bit more boiler room and can push bullets to higher speeds

6.5C was chosen as it had more Ogive space for use with heavier weight projectiles / experimental future projectiles:

1
ReplyToggle Dropdown
Msg 19 of 19 to gatnerdgatnerd
In reply toRe: msg 18

That's fitting considering neckless looks more and more viable (even brass case because of our man emeric) so of course we'd pick one with more ogive space right as more ogive space stops being a problem.

Yup, that sounds about right...

I cannot even at this point.