stancrist said: Indeed, since an APC typically weighs significantly less, it can have better mobility.

Aside from the fact that I've never seen "tactical mobility" defined in such a way, I never said anything about a "light weight" APC.

I'm talking about OTBE.  An APC (because it lacks a turret) will weigh less than an IFV, when both have the same armor protection.

For instance, remove the turret from a Bradley IFV and turn it into an APC.  It will be lighter, faster, but the same armor protection. 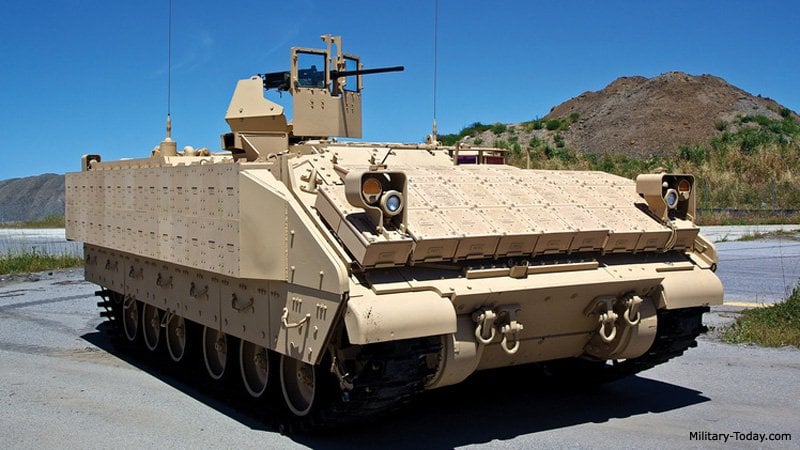 0
ReplyToggle Dropdown
Msg 40 of 213 to schnuersischnuersi
In reply toRe: msg 38

stancrist said: The IFV is an improved infantry transporter.

No its not. The IFV is a specialised vehicle to supplement the tank.

LOL.  "Not an infantry transporter."  LOL.

Why do you think mech inf is part of the armored corps and not the infantry? Because they are no infantry...

Mechanized infantry are not infantry?  ROFL.

0
ReplyToggle Dropdown
Msg 41 of 213 to grayliongraylion
In reply toRe: msg 13

Both cavalry reconnaissance vehicles, neither IFV. Our new IFV will be either Lynx with the same Lance turret as the CRV, or AS21 Redback.

I had always gone with this basic distinction:

IFV: Optimized for fighting other vehicles; superior gun and armor to the APC, optimized for vehicle on vehicle combat

0
ReplyToggle Dropdown
Msg 43 of 213 to gatnerdgatnerd
In reply toRe: msg 42

0
ReplyToggle Dropdown
Msg 44 of 213 to RovingPedantRovingPedant
In reply toRe: msg 15

As far as "no major nation adopting wheeled IFV's", one needs to consider South Africa, in the Bush Wars against Angola (and the Cubans).

In terms of numbers of tanks/AFV's involved, the battles got pretty big.

And carried on for long periods.

And it used, and uses, a LOT of wheeled vehicles quite successfully.

One point is the terrain is not like Western Europe: not so much mud or swamps to go though.

There's a good RAND study directed towards Australia's latest decision to go wheeled or tracked for its new IFV's (it went tracked as you know).

I think there is not a SINGLE correct answer to the choice, I think it's best to have BOTH, and use the variant that suits the case at hand the best.

Sure, if you are in Ukraine in late winter/early spring, you need to deal with the mud.

And tracks are the best for that.

But how often does THAT arise with most armed forces of big countries?

Most times it's little bush wars, and COIN you're dealing with.

Where the right wheeled vehicle can be the better option.

0
ReplyToggle Dropdown
Msg 45 of 213 to WarthogARJWarthogARJ
In reply toRe: msg 44

Welcome to the forum.

In terms of can one design a wheeled vehicle to handle soft ground (mud, muskeg, swamp etc) as well, or better than a tracked vehicle, that RAND report I just posted the link to makes some interesting points:

- You want BIG tires to optimise performance (page 118) (I've read somewhere, maybe in this report, but perhaps elsewhere, that there's in effect a max size in tire you can select in terms of various factors like mounting it on the vehicle, and making it, and the tires the USMC are using are close to that max size)

- Due to the max size of tires you can effectively use on a wheeled IFV, you tend to max out at +/- 35 tons (absolute limit 40 tons)  if you want to get good mud mobility, so if you need lots of armour and size for troops, this tends to constrain your choices (page 141 and after)

0
ReplyToggle Dropdown
Msg 47 of 213 to gatnerdgatnerd
In reply toRe: msg 45

I was just going to say "Hi", but then I saw this discussion, and it's something I'm quite interested in: mobility.

There's a Canadian researcher who has written a LOT (as in over a dozen peer-reviewed papers and at least two text books) on off-road mobility: J.Y. Wong.

And he's got some computer software that can model how a given tracked system behaves on various types of surfaces.

He's even got screen shots of it, and says how easy it is to use.

I'd love to try it, but so far it seems elusive to actually get a copy of it!

Lots of mentions of it but nothing that says where you can get access to it.

This is one of his recent ones, but he's been at for DECADES.

1
ReplyToggle Dropdown
Msg 48 of 213 to stancriststancrist
In reply toRe: msg 39

For instance, remove the turret from a Bradley IFV and turn it into an APC. It will be lighter, faster, but the same armor protection.

Yes but it will not be able to perform the function of an IFV anymore. It ceases to be one without the turret and weapons suite.
The weapons suite is integral to an IFV.