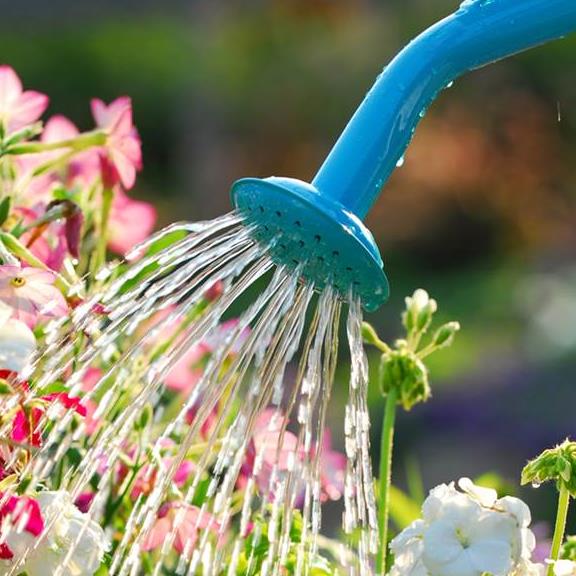 how to open a new forum

Staff member gets a message stating he has no privleges?

Staff Member can not do anything in the controls

Forum not moderated but...

Would this be possible? Clear Folders.

Latest Feb-21 by The Zookeeper (B0UNTYMAN)

ratings are more off than ever...

Specific words in the filter

It's been a while, but you may remember me from the 'Breaktime Classic' forum a number of years back.

I'm in the process of setting up a new forum to provide a discussion platform more secure than Facebook or Twitter for a local group of concerned citizens, but Delphi's new 'zeta' thingie is messing me up. Is there a way for me to provide a direct link to a 'classic' Delphi forum to my potential users?

I have the problem of persuading a bunch of FB users to sign-up on Delphi to conduct this discussion, and that's not gonna be easy. Delphi's classic format is pretty much dummy-proof (even for FB users!), but the new Zeta format Dephi is offering is too complicated for even me to figure out.

I need a link that will take new users directly to the forum in the classic format. How can I do this?

Any help you can provide will be appreciated, as always.

0
ReplyToggle Dropdown
Msg 2 of 20 to SkiPatrolTHRSkiPatrolTHR
In reply toRe: msg 1

I see the forum is set to Classic already, anyone  using the address will see it that way.

0
ReplyToggle Dropdown
Msg 3 of 20 to SkiPatrolTHRSkiPatrolTHR
In reply toRe: msg 2

Even though the desktop is set to Classic mobile users will most likely see it as Zeta. Don't write your potential users off so easy though. Zetas feed is going to feel more familiar to them if they've never used Classic.

0
ReplyToggle Dropdown
Msg 4 of 20 to gunterGUNTER
In reply toRe: msg 2

Thanks, Gunter! Sorry for being such a dumb-bell. I don't know how I lost track of which control panel I was using, but when I checked the 'view in Classic mode' box I thought I was making a personal viewing choice, not setting a basic, forum-wide default. Duh. :(

All good now on that score.

0
ReplyToggle Dropdown
Msg 5 of 20 to KidmagnetKidmagnet
In reply toRe: msg 3

Thanks, Kid. That's an interesting point I hadn't thought of. I don't use a cell phone for much besides making telephone calls or sending text messages, but I gather that a lot of people these days only light up an actual computer when the battery on their cell phone is dead.

I'll have to take your word for it that the Zeta version of Delphi appears well on a cell phone and that the problems I had viewing Zeta in IE11 won't show up on a modern 'mobile'. I finally had to purchase a new cell phone last year--my Blackberry Curve had done too many miles over too many years and was physically falling apart--but it's a 'BlackDroid' (aka 'DroidBerry', take yer pick) and thus not a secure device, so I've got it locked down tighter than a bull's arse in fly season to keep Google from x-raying my knickers every time I put it in my pocket. Under those conditions, this fancy new phone can barely get out of its own way. Grrr.

But you might be able to answer a related question for me:

I note that many sites such as Delphi now offer users the option to log-in using their FB, Twitter, or Google user-name and p/w. I refuse to use any of those platforms for security reasons, and one of my main goals in setting up this forum on Delphi is to provide a secure on-line environment where people can hold a discussion without being required to have a FB/Twitter/Google account.

Unfortunately, a lot of people do have accounts on those platforms, and too many of them are lazy and will take the easiest way out never thinking about the security of their personal data or contributions. IOW, if Delphi offers them the option of signing in using their FB credentials, most FB users will take it.

So my question is, what is happening 'under the hood' when a new user to Delphi signs in using the credentials from an outside social-media platform?  Does everything that user posts on Delphi wind up being 'shared' (ahem!) to the user's 'feed' on that outside platform?

0
ReplyToggle Dropdown
Msg 6 of 20 to SkiPatrolTHRSkiPatrolTHR
In reply toRe: msg 5

So my question is, what is happening 'under the hood' when a new user to Delphi signs in using the credentials from an outside social-media platform? Does everything that user posts on Delphi wind up being 'shared' (ahem!) to the user's 'feed' on that outside platform?

No. First you`d have to have a publicly accessible forum (I think you said it was private?) and allow in your controls for sharing and the user would have to intentionally share.

Give them the link to the Delphi Home page instead of your forum https://www.delphiforums.com/

You can save the graphics below and upload them to your Facebook/Messenger or whatever you are using to invite them. 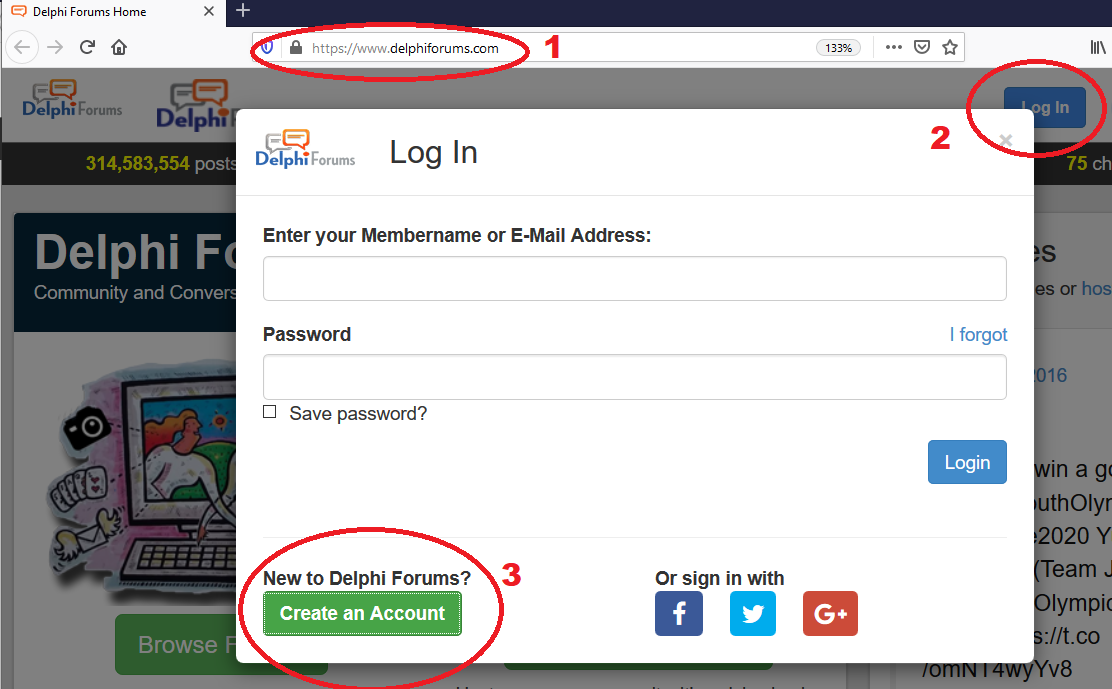 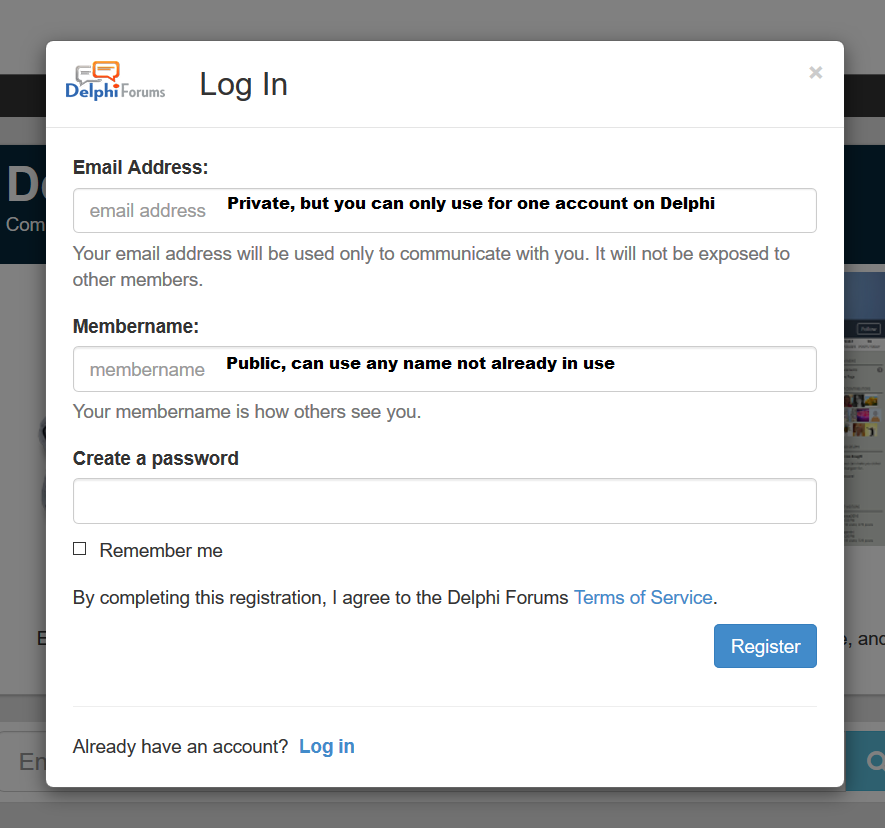 If they do log in with Facebook and then want to create a separate Delphi account they would need to use a different email address then the one they used for Facebook or whatever account they linked to Delphi. That or trick the system. Lets deal with that when and if it happens lol

0
ReplyToggle Dropdown
Msg 7 of 20 to SkiPatrolTHRSkiPatrolTHR
In reply toRe: msg 5

When using social logins only the fact that you are logging into DelphiForums is shared. We don't keep track of interests to start other than what is needed to populate your individual forum settings and we never share such personal identifiable data. There may be be ads targeted at topics in a forum, but never at specific members.

1
ReplyToggle Dropdown
Msg 8 of 20 to SkiPatrolTHRSkiPatrolTHR
In reply toRe: msg 5

Oh by the way if you are using a Windows 10 machine Edge is edgy here - in Classic or Zeta. I think you will have issues with the Start page editor and IE11 - if you do you can try Edge, but Chrome or Firefox work best. Feel free to bug me for help getting things set up or helping your members access things.

0
ReplyToggle Dropdown
Msg 9 of 20 to gunterGUNTER
In reply toRe: msg 8

Sorry for the delay in replying, but I've been battling with the new software and not getting anywhere fast. Apparently, Delphi's new version of the classic forum does not like the latest version of IE (IE11), and no matter what changes I made to the 'welcome page' in the control panel, they got dumped every time I hit 'submit'. I finally had to give up and use Firefox, which doesn't make me a particularly happy camper because FF is a serious memory-hog. But at least it's not Chrome (which key-logs every character I type and tries to see through the hockey-tape over my webcam lens). Small thanks for small favours....

KidMagnet mentioned problems with MS Edge and Win10. I don't have MS Edge on this machine and it's not running Win10; it's an HP Probook running Win7Pro. (I am thus able to run an XP Virtual Machine in the back end to handle the professional legacy software I need to run my business.) The fact I can no longer 'talk' to Delphi using IE11 on Win7 is a major annoyance. My own website is backwards compatible to IE9, and I do not have anywhere near the development resources (read: 'budget')  that Delphi does. I fail to see why your developers couldn't have preserved the older version of the classic forum package so that people who don't change phones every six months could continue to use what is still the best forum software out there. Sorry for the rant, but this sort of thing really gets my juices flowing....

Anyway, thanks to you and KidMagnet for the security into. It's what I needed to know before sending a link to the new forum to my 'FB' colleague. I am now using Firefox to re-writie my Welcome Page to encourage people to create a Delphi account either with their social media credentials or by using the 'Create an Account' button on the standard log-in page.

PS to KidMagnet: I discovered a control which allows me to specify the 'classic' view for mobile devices as the default behaviour. If I can figure out how to bully my locked-down BlackDroidBerry into looking at the new forum (using FF), I will shortly know if that had any effect. You need to understand that my problem is to describe to users how to navigate through Delphi's Gooey (GUI). Most of our users will be native French-speakers; they will have a basic knowledge of English terms such as 'log-in', 'User Name' and 'Password', but for the rest of it, I need to provide a detailed description in French of how to get where they need to go.

0
ReplyToggle Dropdown
Msg 10 of 20 to SkiPatrolTHRSkiPatrolTHR
In reply toRe: msg 9

re IE11 a. this is a problem from way back. Using firefox or chrome is the way to go, but this may work if you want to experiment with Compatibility Mode: