Federal Dependencies of Venezuela (encompass most of Venezuela's offshore islands in the Caribbean Sea and the Gulf of Venezuela, excluding those islands that form the State of Nueva Esparta. These islands, with a total area of 342 square kilometres, are sparsely populated – according to the preliminary results of the 2011 Census only 2,155 people live there permanently, with another hundred from Margarita Island who live there seasonally to engage in fishing. Local government is officially under the authority of the mayor of Caracas, although de facto power is often held in the heads of the sparse and somewhat isolated communities that decorate the territories)

Guyana - is a country on the northern mainland of South America. It is the only English speaking country in South America, and is culturally considered part of the Anglophone-Caribbean sphere. In addition it is one of the founding member countries of the Caribbean Community organization (CARICOM). Guyana is bordered by the Atlantic Ocean to the north, Brazil to the south and southwest, Venezuela to the west, and Suriname to the east. With an area of 215,000 square kilometres (83,000 sq mi), Guyana is the third-smallest sovereign state on mainland South America after Uruguay and Suriname. 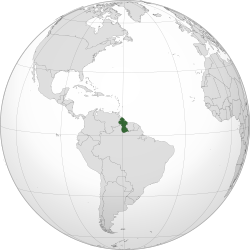 Hammock - During the time of the Spanish conquest, Columbus noted that “A great many Indians in canoes came to the ship to-day for the purpose of bartering their cotton, and hamacas, or nets, in which they sleep.” This Venezuelan hammock is just one of myriad available as souvenirs.

Ibagué -  is the capital of Tolima and also part of The Colombian coffee Region, one of the 32 departments that make up the Republic of Colombia. The city is located in the center of the country, on the central mountain range of the Colombian Andes, near Nevado del Tolima. It is one of the most populous cities in the country, with about 553,526 (2015 estimate) inhabitants, making it the seventh (7th) most populous in Colombia. It was founded on October 14, 1550, by the Spanish captain Andrés López de Galarza. Messi - Lionel Messi is the current captain of the Argentinian football team.

Nuevo Sol (is the currency of Peru; it is subdivided into 100 céntimos. The ISO 4217 currency code is PEN. The sol replaced the Peruvian inti in 1991 and the name is a return to that of Peru's historic currency, as the previous incarnation of sol was in use from 1863 to 1985. Although sol in this usage is derived from the Latin solidus, the word also means "sun" in Spanish. There is thus a continuity with the old Peruvian inti, which was named after Inti, the Sun God of the Incas)