Xu Yanmei -  is a female Chinese diver. At Seoul Olympics, won a gold medal in platform (1988); placed 1st in platform at Asian Games (1990) and 1st at FINA World Cup (1987); became an international diving referee. She was inducted into International Swimming Hall of Fame (2000). 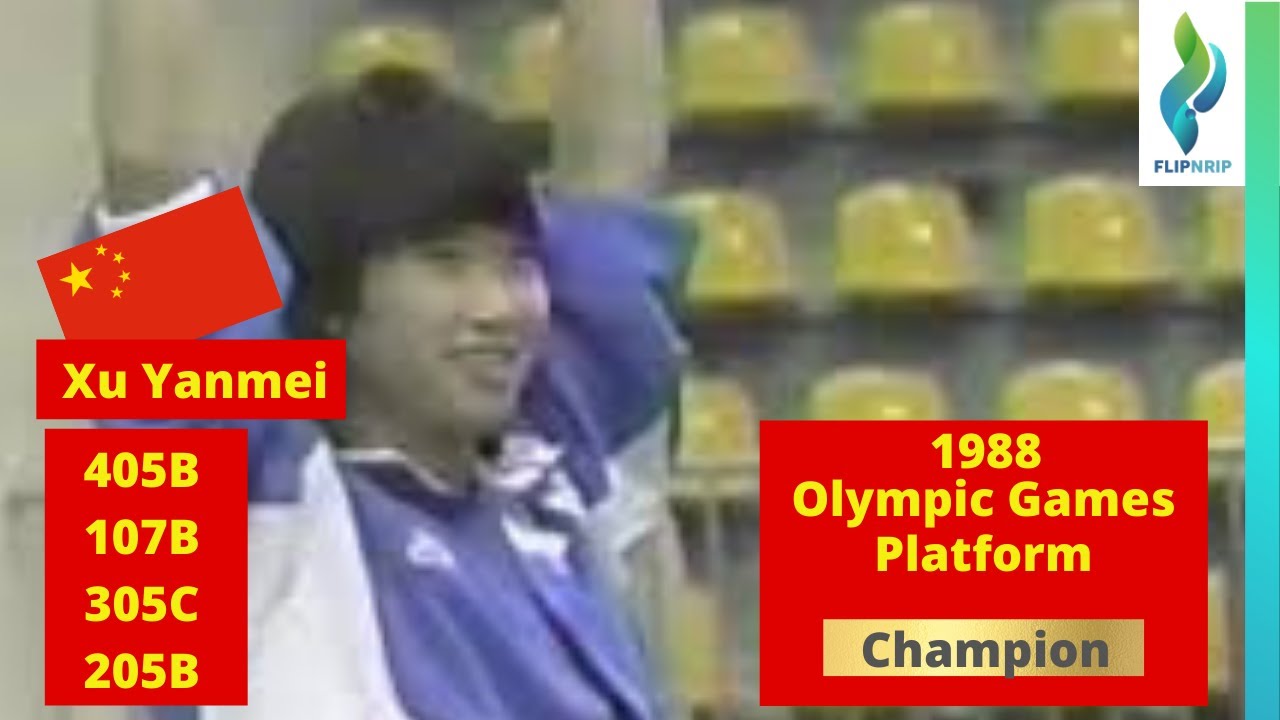 Xu Yanmei from Team China in the Womens Platform Diving Finals at the 1988 Olympic Games. She is the gold medal winner in this event. She had won the World C...

Zach Apple - is an American professional swimmer who specializes in the sprint freestyle events. He currently swims for DC Trident in the International Swimming League. He won his first Olympic gold medal in the 4x100-meter freestyle relay at the 2020 Summer Olympics, swimming in the prelims and the final of the event, and later in the same Olympic Games won a gold medal and helped set a new world record in the 4x100-meter medley relay, swimming the freestyle leg of the relay in the final.

Athena and Phevos (were the official mascots of the 2004 Summer Olympics. The names of the two mascots are a reference to two gods of Olympus: “Phevos” is another name for Apollo, the god of light and music; Athena is the goddess of wisdom and protector of the city of Athens. The two mascots thus symbolize the link between Ancient Greece and the Olympic Games of the modern era. Phevos and Athena are brother and sister. They owe their strange shape to a typical terracotta doll in the shape of a bell from the 7th century BC, the “daidala”. They symbolise the pleasure of playing and the values of Olympism. The choice of a brother and sister was deliberate: they embody the unity of men and women, through equality and brotherhood. Phevos wears a blue tunic to recall the sea and the color of the Games emblem, while Athena is in orange to evoke the sun) 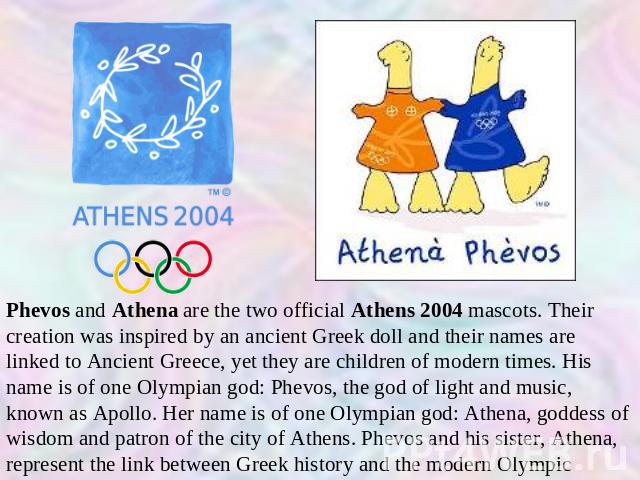 Brooke Forde - At the 2020 United States Olympic Trials Forde finished sixth in the 200m freestyle, qualifying her for the relay team at the 2020 Olympics after the results of the women's 50m freestyle opened a spot for her. She earned a silver medal for swimming on the preliminary 4x200-meter freestyle relay team. Brooke is a native of Louisville, KY and started her swimming career at Lakeside Swim Club in Louisville. She is the 11th swimmer from Lakeside Swim Club to make the U-S Olympic team.

Brooke at her high school, Sacred Heart, for a program

Cycling (has been contested at every Summer Olympic Games since the birth of the modern Olympic movement at the 1896 Summer Olympics, at which a road race and five track events were held. Mountain bike racing entered the Olympic program at the Atlanta Olympics, followed by BMX racing in 2008 and freestyle BMX in 2020. Prior to the 2020 Summer Olympics, all events were speed races, but the 2020 program will feature BMX freestyle for the first time)

Caeleb Dressel - is an American swimmer who specializes in the freestyle and butterfly sprint events. Dressel is a seven-time Olympic gold medalist and holds the world records in the 100 meter butterfly (both long course and short course), 50 meter freestyle (short course), and 100 meter individual medley (short course). Dressel holds the American records in 50-meter and 100-meter freestyle and in 50-meter and 100-meter butterfly (all long course). He also holds the short course records in 50-yard and 100-yard freestyle events, the 100-yard butterfly, and the 200-yard individual medley, and formerly in the 100-yard breaststroke. At the 2020 Tokyo Olympics, Dressel won five gold medals, making him the fifth American in history to win that many in a single Olympics in the past 50 years. Mark Spitz, Michael Phelps, Eric Heiden, and Matt Biondi are the other four. He also became the first swimmer in history to win gold in the 50-meter freestyle, the 100 free and the 100-meter butterfly at the same Olympics.

Dressel is seen to have a number of tattoos on his left arm, which make up a full sleeve. When counting the larger designs featured along his arm, including an Alligator, a Bear, an Eagle and an American themed piece, Dressel has a total of four tattoos that make up the sleeve. Elsewhere he also has a tattoo of the Olympic rings on his right arm, which feature the five blue, yellow, black, green and red rings.

In a sit-down interview with Swimming World in 2019, the swimmer revealed that his sleeve was “Florida themed“. He explained to the publication: “I’ve got a whole Florida theme going on [as] all the animals are native to Florida.” While the sleeve is inspired by the US state of Florida, the swimmer has previously spoken out on how each piece and its individual meaning to him. The alligator on his lower arm reflects his college the University of Florida who have an alligator as their emblem. Dressel has also discussed the meaning behind his bear tattoo, which he had done as it’s his favorite animal. According to Sports Skeeda, the eagle at the top of his arm and the American flags seen on his sleeve are said to represent the Olympian’s love for his country.

Eight (8) badminton players ejected from the 2012 Olympic Games (Eight female badminton doubles players were disqualified from the London Olympics after trying to lose matches to receive a more favorable place in the tournament. The Badminton World Federation announced its ruling after investigating two teams from South Korea and one each from China and Indonesia. It punished them for "not using one's best efforts to win a match" and "conducting oneself in a manner that is clearly abusive or detrimental to the sport" in their matches)

Explosion W (riding Explosion W, four-time Olympian Ben Maher, has become just the second Britain to win the jumping individual event at the Olympic Games with a victory at Tokyo 2020) 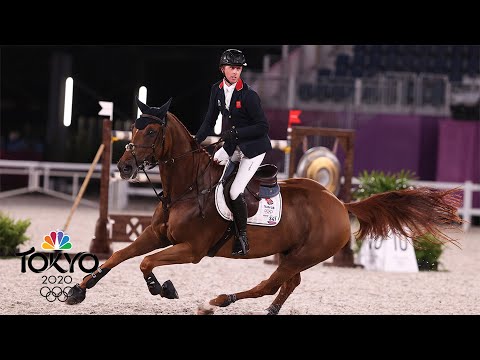 Great Britain's Ben Maher and his horse Explosion W head into the individual show jumping final with the fastest qualification time of 73 riders in Tokyo. #N... 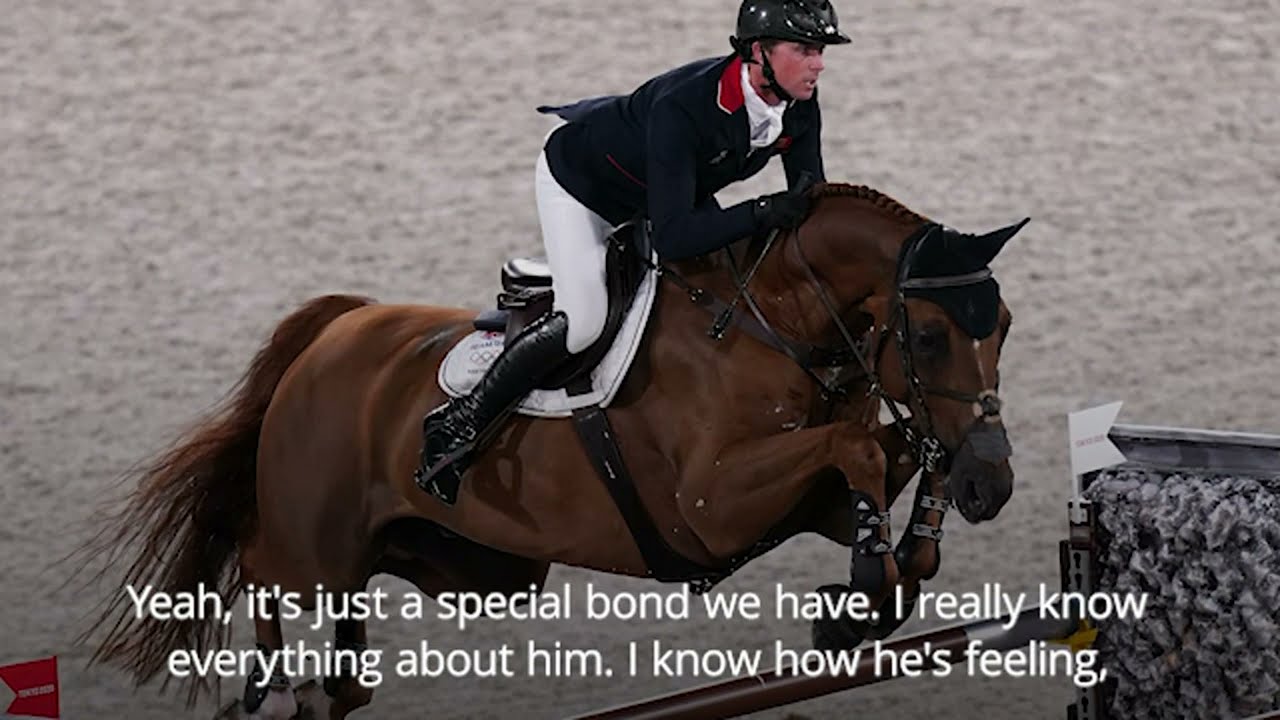 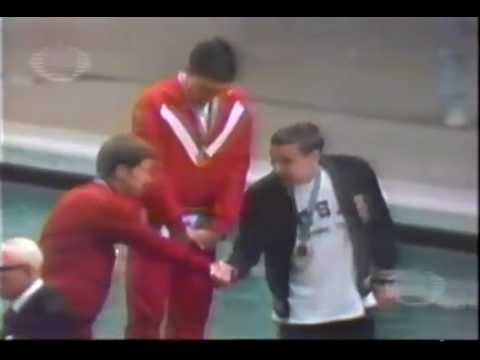 Florence Griffith-Joyner - also known as Flo-Jo, was an American track and field athlete. The world records she set in 1988 for both the 100 m and 200 m still stand. During the late 1980s she became a popular figure due to both her record-setting athleticism and eclectic personal style. Griffith-Joyner was athletic from a young age and began running track meets as a child. While attending California State University, Northridge (CSUN) and University of California, Los Angeles (UCLA), she continued to compete in track and field. While still in college, she qualified for the 100 m 1980 Olympics, although she did not actually compete due to the U.S. boycott. She made her Olympic debut four years later, winning a silver medal in the 200 meter distance at the 1984 Olympics held in Los Angeles. At the 1988 U.S. Olympic trials, Griffith set a new world record in the 100 meter sprint. She went on to win three gold medals at the 1988 Olympics. In February 1989, Griffith-Joyner abruptly retired from athletics. She remained a pop culture figure through endorsement deals, acting, and designing. She died in her sleep as the result of an epileptic seizure in 1998 at the age of 38.