Is Bob on iOS gone for good?

1566 Icarus  (provisional designation: 1949 MA) is a large near-Earth object of the Apollo group and the lowest numbered potentially hazardous asteroid. It has is an extremely eccentric orbit (0.83) and measures approximately 1.4 km (0.87 mi) in diameter. In 1968, it became the first asteroid ever observed by radar. Its orbit brings it closer to the Sun than Mercury and further out than the orbit of Mars, which also makes it a Mercury-, Venus-, and Mars-crossing asteroid. This stony asteroid and relatively fast rotator with a period of 2.27 hours was discovered on 27 June 1949, by German astronomer Walter Baade at the Palomar Observatory in California. It was named after the mythological Icarus 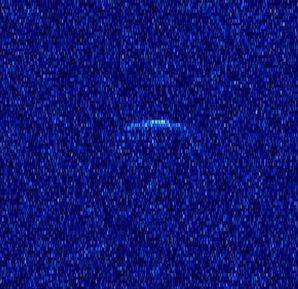 Jupiter 2 ( was a starship designed and constructed by the United Global Space Force. The ship was engineered to transport a single family - the Robinson Family - in cryosleep to the planet Alpha Prime in the star system Alpha Centauri (though this is not stated in the movie). Their mission would be to travel at slower-than-light speed to Alpha Prime, and once they reached their destination they were to begin construction of a second Hypergate in orbit around their destination planet. Their mission was timed as such that by the time they had reached Alpha Prime, the first Hypergate orbiting Earth would be completed and the two gates would then be connected via hyperspace so as to allow the human species to journey to another planet capable of sustaining life and escape the dying Earth. The Jupiter consisted of an outer launch capsule, the Jupiter 1, and an interstellar starship, the Jupiter 2, equipped with a hydroponics bay, medical bay, and an experimental hyperdrive. The hyperdrive was meant to be used only when the construction of the Hypergates had been completed, otherwise the ship's escape vector would be random. The Jupiter 1 would first lift off via conventional propulsion into orbit from atop a launch tower and, once above the Earth, it would break apart explosively. The Jupiter 2 starship would then ignite its engines and begin its ten year mission to Alpha Prime) 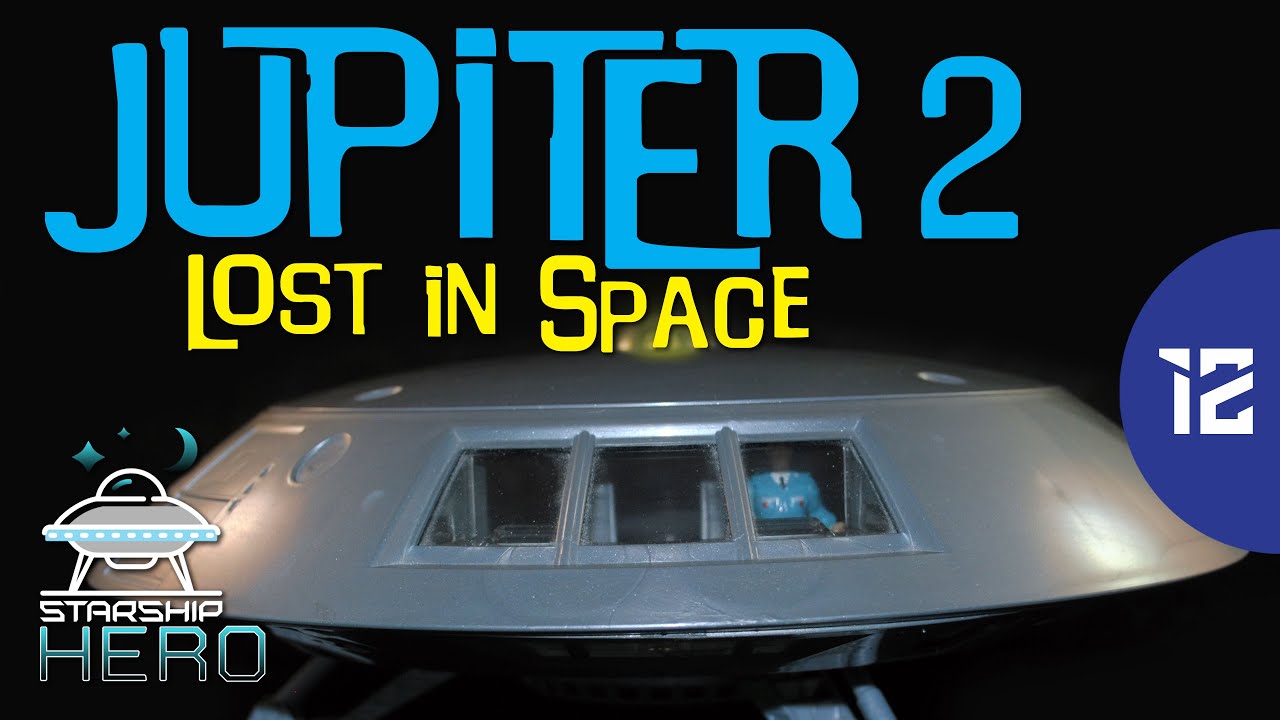 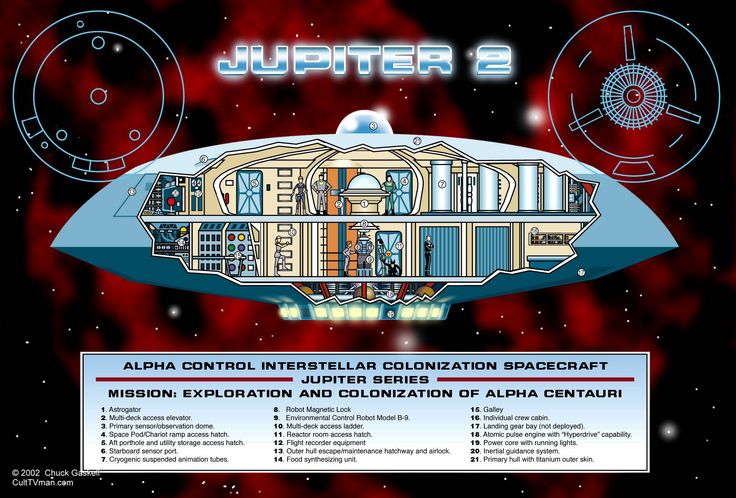 The Kepler Mission is specifically designed to survey our region of the Milky Way galaxy to discover hundreds of Earth-size and smaller planets in or near the habitable zone and determine the fraction of the hundreds of billions of stars in our galaxy that might have such planets.

The scientific objective of the Kepler Mission is to explore the structure and diversity of planetary systems. This is achieved by surveying a large sample of stars to: 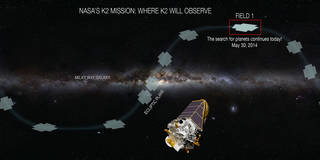 The Kepler spacecraft, operating as the K2 mission, will spend three years observing a ribbon of the sky (blue line) as it orbits the sun. Roughly every 80 days, the spacecraft will pan to a new field of view (blue stamp) aligned with the plane of the solar system. 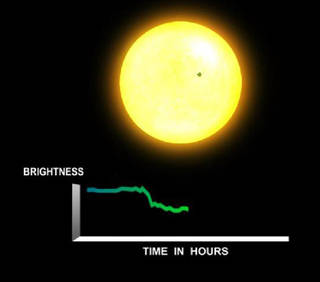 When a planet crosses in front of its star as viewed by an observer, the event is called a transit. Transits by terrestrial planets produce a small change in a star's brightness of about 1/10,000 (100 parts per million, ppm), lasting for 2 to 16 hours.
0
ReplyToggle Dropdown
Msg 37092 of 37270 to PTG (anotherPTG)anotherPTG
In reply toRe: msg 37091

Light-Year (alternatively spelled light year, is a large unit of length used to express astronomical distances and is equivalent to about 9.46 trillion kilometers (9.46×1012 km), or 5.88 trillion miles (5.88×1012 mi). As defined by the International Astronomical Union (IAU), a light-year is the distance that light travels in a vacuum in one Julian year (365.25 days). Because it includes the time-measurement word "year", the term light-year is sometimes misinterpreted as a unit of time. The light-year is most often used when expressing distances to stars and other distances on a galactic scale, especially in non-specialist contexts and popular science publications. The unit most commonly used in professional astronomy is the parsec (symbol: pc, about 3.26 light-years) which derives from astrometry; it is the distance at which one astronomical unit subtends an angle of one second of arc) 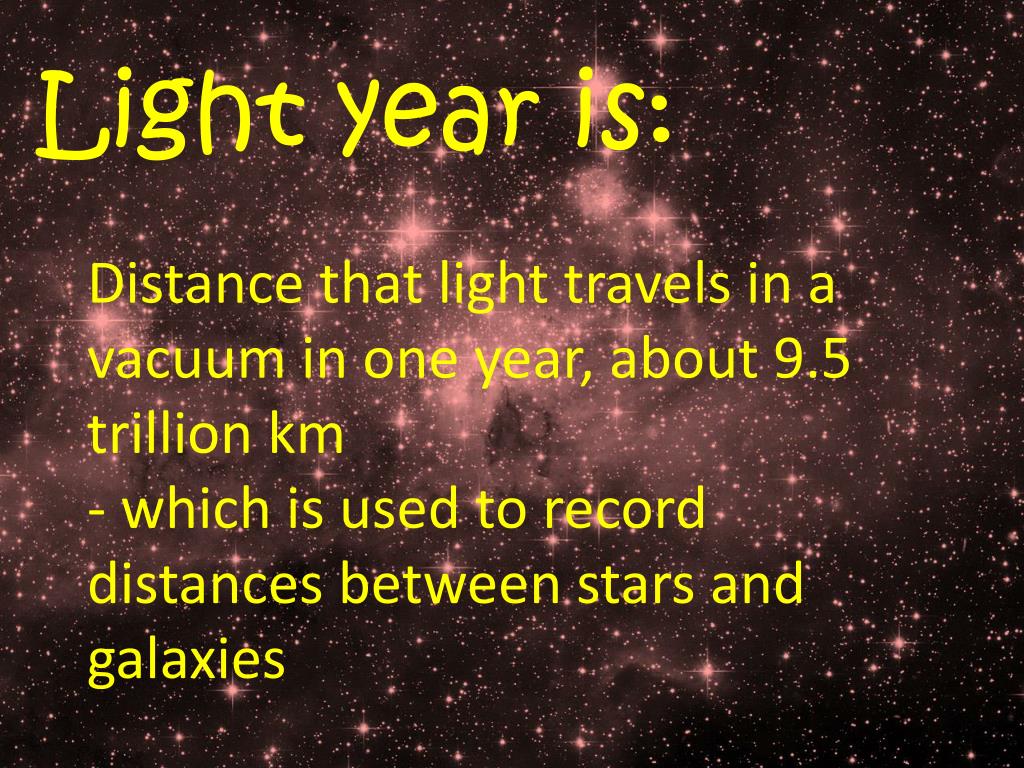 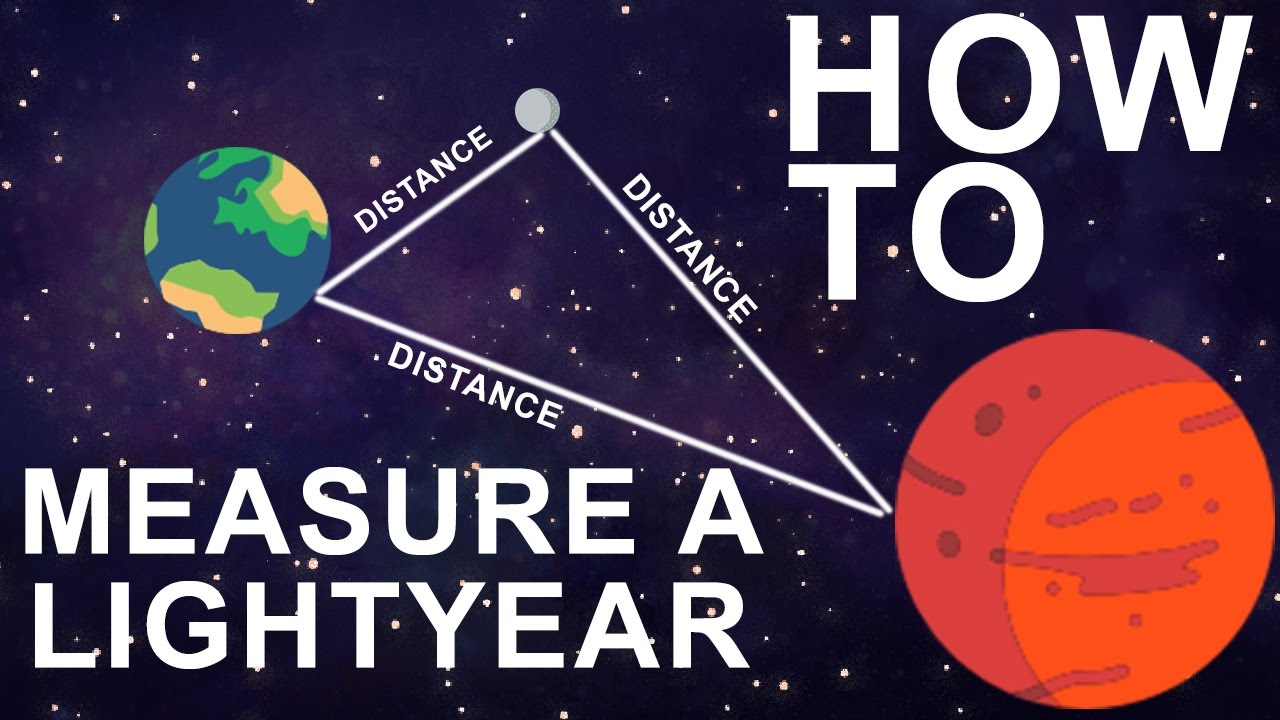 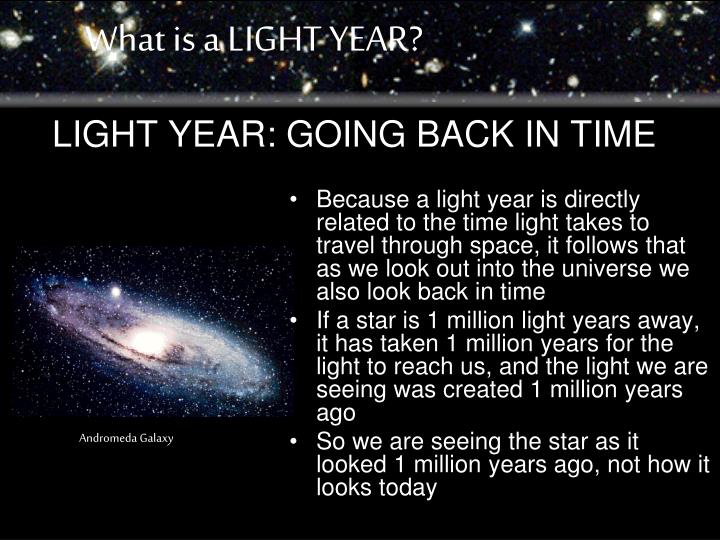 The Mariner program was conducted by the American space agency NASA to explore other planets. Between 1962 and late 1973, NASA's Jet Propulsion Laboratory (JPL) designed and built 10 robotic interplanetary probes named Mariner to explore the inner Solar System - visiting the planets Venus, Mars and Mercury for the first time, and returning to Venus and Mars for additional close observations.

The program included a number of interplanetary firsts, including the first planetary flyby, the planetary orbiter, and the first gravity assist maneuver. Of the 10 vehicles in the Mariner series, seven were successful, forming the starting point for many subsequent NASA/JPL space probe programs. The planned Mariner Jupiter-Saturn vehicles were adapted into the Voyager program, while the Viking program orbiters were enlarged versions of the Mariner 9 spacecraft. Later Mariner-based spacecraft include Galileo and Magellan, while the second-generation Mariner Mark II series evolved into the Cassini–Huygens probe.

The total cost of the Mariner program was approximately $554 million 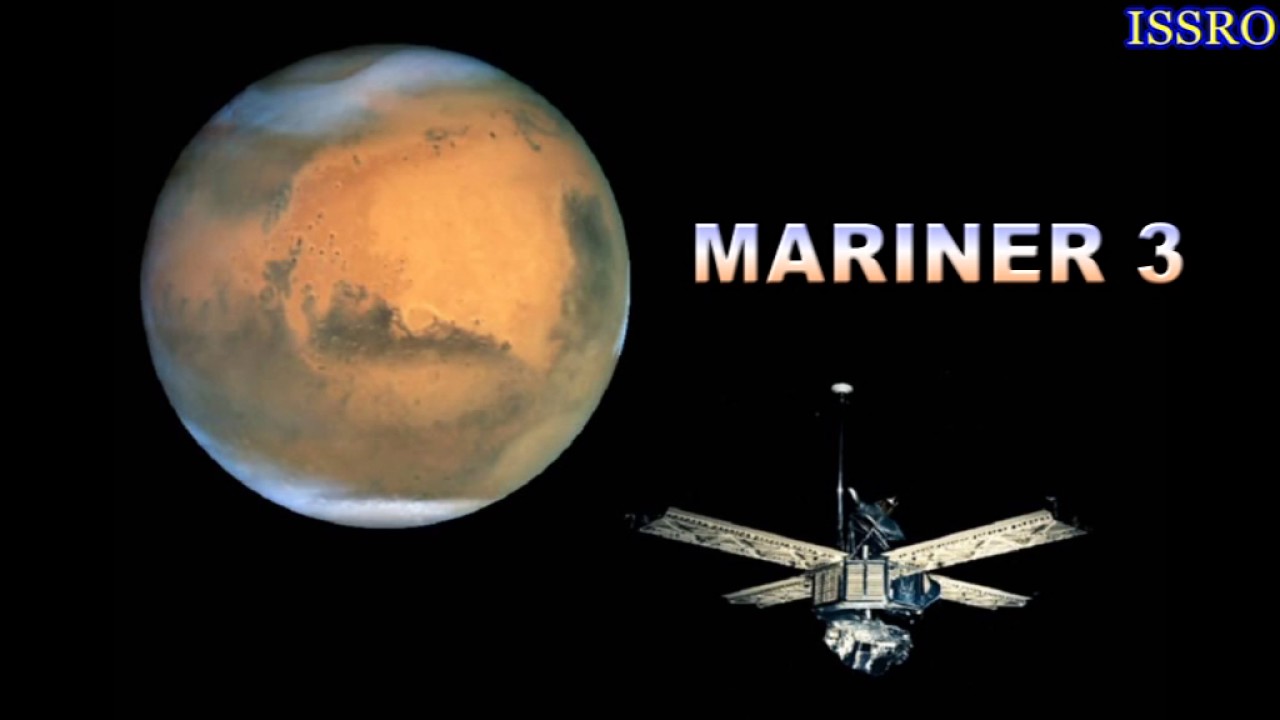 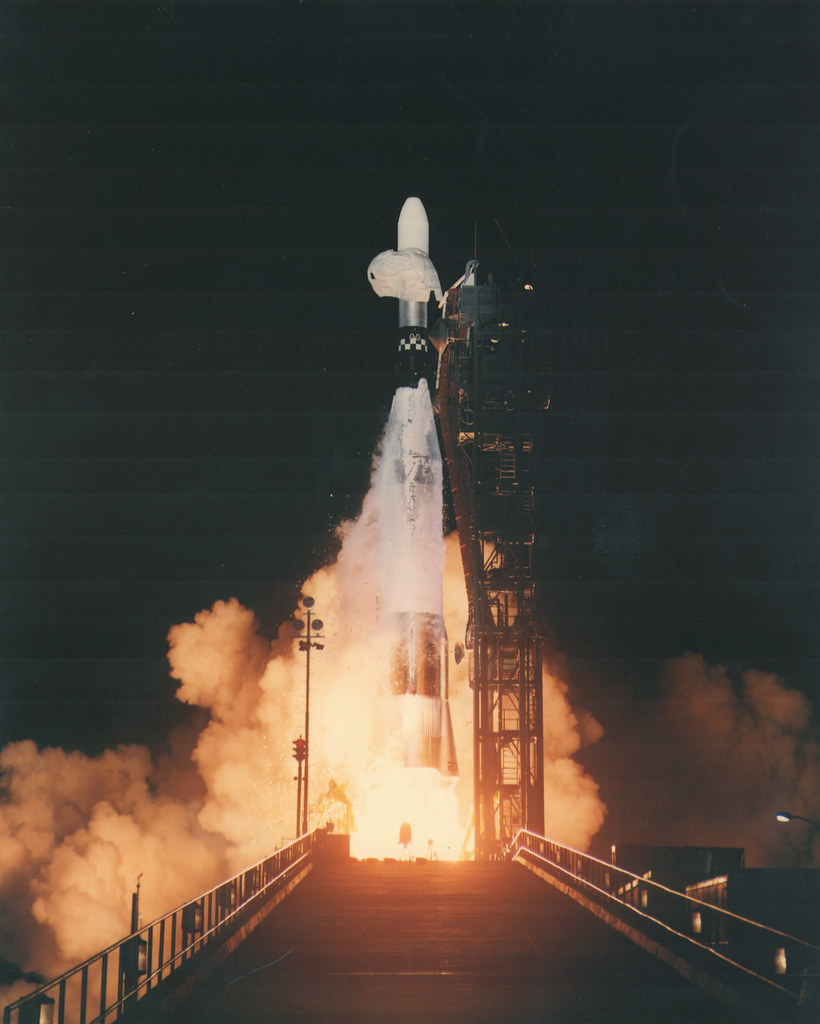 Nebula (is a distinct luminescent part of interstellar medium, which can consist of ionized, neutral or molecular hydrogen and also cosmic dust. Nebulae are often star-forming regions, such as in the "Pillars of Creation" in the Eagle Nebula. In these regions, the formations of gas, dust, and other materials "clump" together to form denser regions, which attract further matter, and eventually will become dense enough to form stars. The remaining material is then thought to form planets and other planetary system objects. Most nebulae are of vast size; some are hundreds of light-years in diameter. A nebula that is visible to the human eye from Earth would appear larger, but no brighter, from close by. The Orion Nebula, the brightest nebula in the sky and occupying an area twice the angular diameter of the full Moon, can be viewed with the naked eye but was missed by early astronomers. Although denser than the space surrounding them, most nebulae are far less dense than any vacuum created on Earth – a nebular cloud the size of the Earth would have a total mass of only a few kilograms. Earth's air has a density of approximately 1019 molecules per cubic centimeter; by contrast the densest nebulae can have densities of 10,000 molecules per cubic centimeter. Many nebulae are visible due to fluorescence caused by embedded hot stars, while others are so diffused that they can be detected only with long exposures and special filters. Some nebulae are variably illuminated by T Tauri variable stars. Originally, the term "nebula" was used to describe any diffused astronomical object, including galaxies beyond the Milky Way. The Andromeda Galaxy, for instance, was once referred to as the Andromeda Nebula (and spiral galaxies in general as "spiral nebulae") before the true nature of galaxies was confirmed in the early 20th century by Vesto Slipher, Edwin Hubble and others. Edwin Hubble discovered that most nebulae are associated with stars and illuminated by starlight. He also helped categorize nebulae based on the type of light spectra they produced) 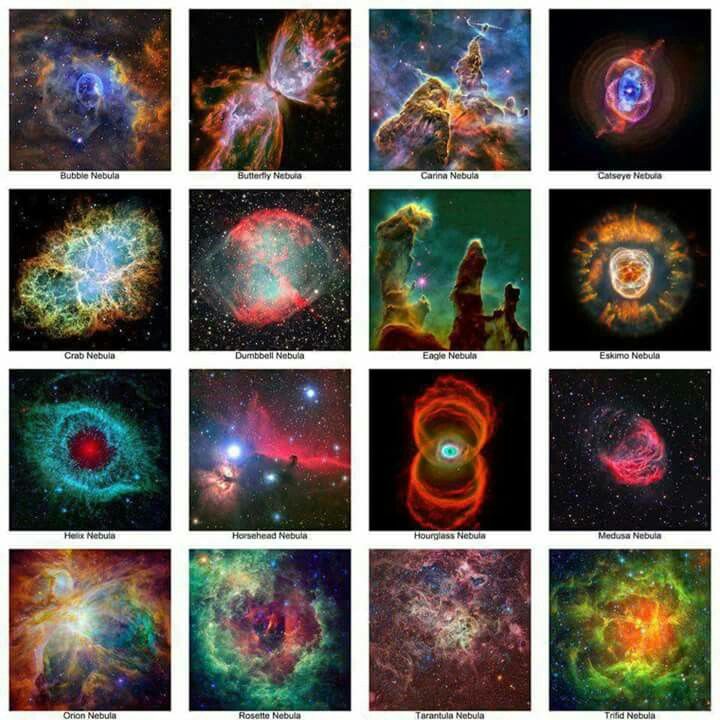 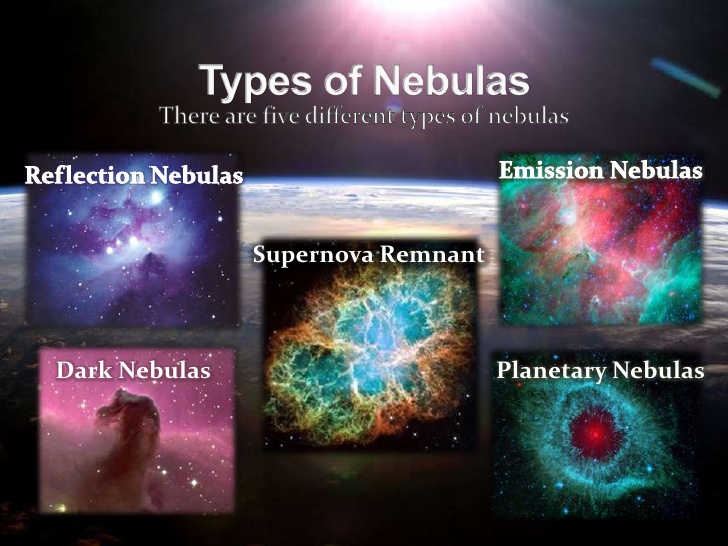 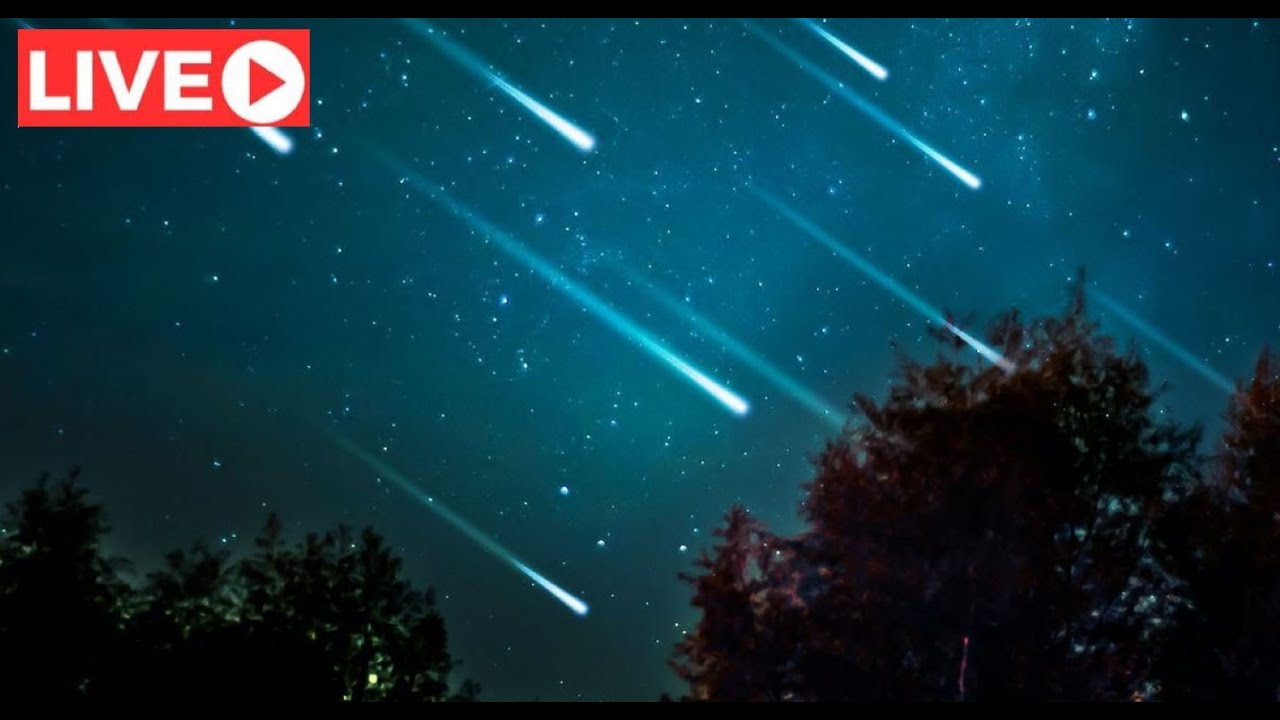 Every year in autumn, our planet passes through a ribbon of space-debris left behind by Halley's Comet, and Earth's atmosphere colliding with this trail of i...

Pillars of Creation (is a photograph taken by the Hubble Space Telescope of elephant trunks of interstellar gas and dust in the Eagle Nebula, in the Serpens constellation, some 6,500–7,000 light-years (2,000–2,100 pc; 61–66 Em) from Earth. They are named so because the gas and dust are in the process of creating new stars, while also being eroded by the light from nearby stars that have recently formed. Taken on April 1, 1995, it was named one of the top ten photographs from Hubble by Space.com. The astronomers responsible for the photo were Jeff Hester and Paul Scowen from Arizona State University. The region was rephotographed by ESA's Herschel Space Observatory in 2011, again by Hubble in 2014 with a newer camera, and the James Webb Space Telescope in 2022. Released in 2007, Chandra X-ray Observatory (AXAF) had observed the area in 2001; it did not find many X-ray sources in the towers but was able to observe sources at various X-ray energy levels in the area from young stars. The image is noted for its global culture impact, with National Geographic noting on its 20th anniversary that the image had been featured on everything from "t-shirts to coffee-mugs") 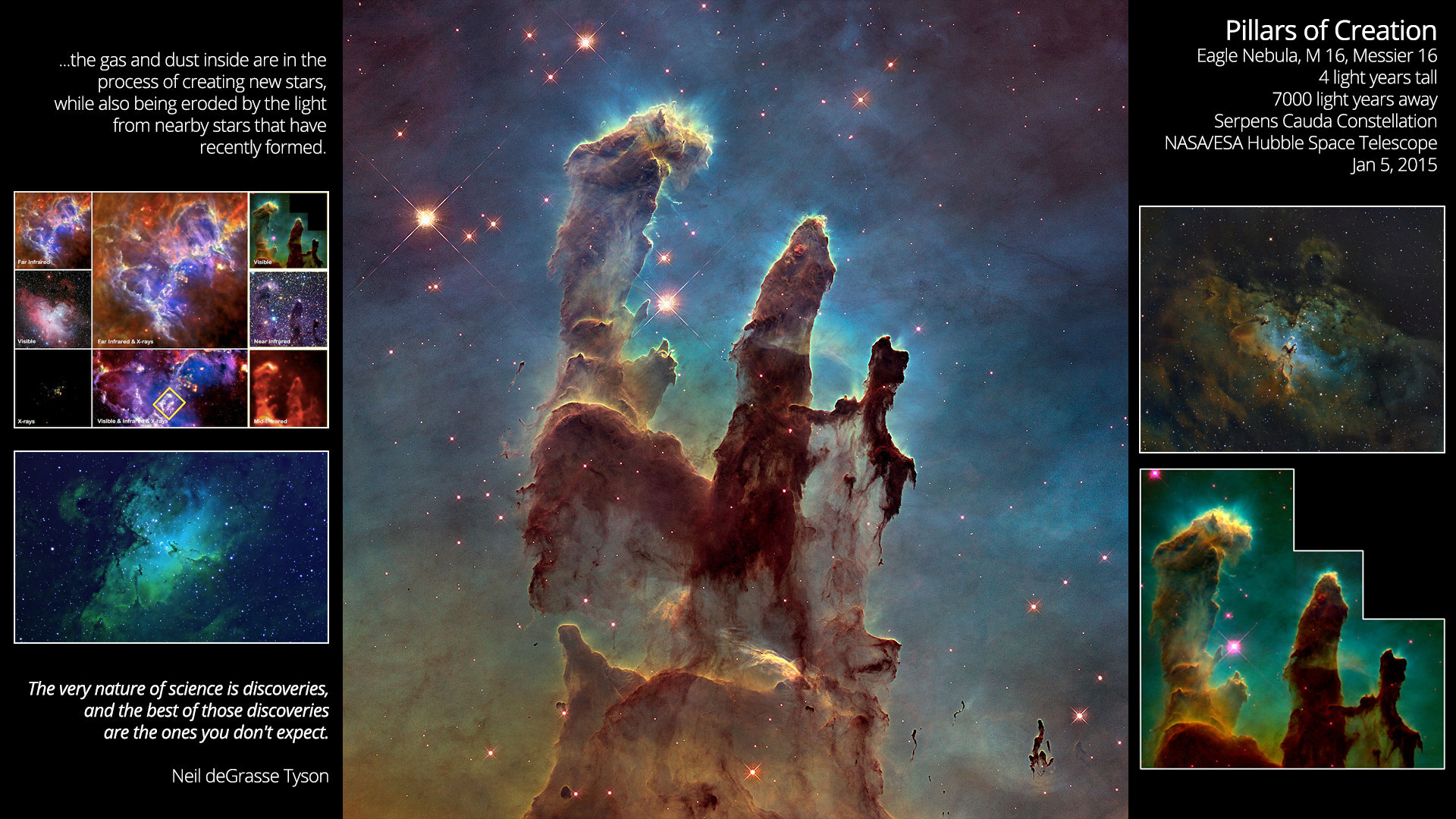 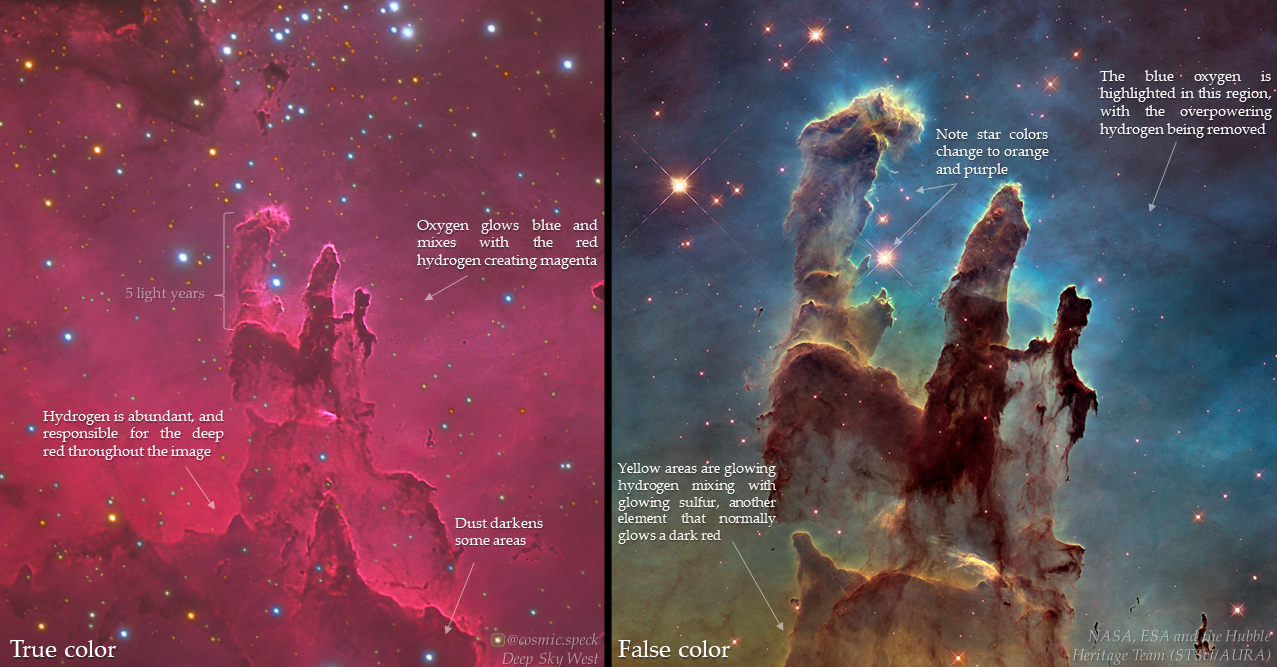 The Quadrantids (QUA) are a meteor shower that peaks in early January and whose radiant lies in the constellation Boötes. The zenithal hourly rate (ZHR) of this shower can be as high as that of two other reliably rich meteor showers, the Perseids in August and the Geminids in December,yet Quadrantid meteors are not seen as often as those of the two other showers because the time frame of the peak is exceedingly narrow, sometimes lasting only hours. Moreover, the meteors are quite faint, with mean apparent magnitudes between 3.0 and 6.0.

The meteor rates exceed one-half of their highest value for only about eight hours (compared to two days for the August Perseids), which means that the stream of particles that produces this shower is narrow, and apparently deriving within the last 500 years from some orbiting body.The parent body of the Quadrantids was tentatively identified in 2003 by Peter Jenniskens as the minor planet 2003 EH1, which in turn may be related to the comet C/1490 Y1 that was observed by Chinese, Japanese and Korean astronomers some 500 years ago.

Tammy, I agree. The pictures from the new Webb space telescope are amazing.

Rings of Neptune - consist primarily of five principal rings. They were first discovered (as "arcs") by simultaneous observations of a stellar occultation on 22 July 1984 by André Brahic's and William Hubbard's teams at La Silla Observatory (ESO) and at Cerro Tololo Interamerican Observatoryin Chile. They were eventually imaged in 1989 by the Voyager 2 spacecraft. At their densest, they are comparable to the less dense portions of Saturn's main rings such as the C ring and the Cassini Division, but much of Neptune's ring system is quite tenuous, faint and dusty, more closely resembling the rings of Jupiter. Neptune's rings are named after astronomers who contributed important work on the planet: Galle, Le Verrier, Lassell, Arago, and Adams. Neptune also has a faint unnamed ring coincident with the orbit of the moon Galatea. Three other moons orbit between the rings: Naiad, Thalassa and Despina.

The Webb is credited with capturing the clearest view of Neptune's rings in 30 years. In September, NASA released this image showing the ice giant like never before. "It has been three decades since we last saw these faint, dusty rings, and this is the first time we've seen them in the infrared," said Heidi Hammel, Neptune system expert and interdisciplinary scientist for Webb per NASA. 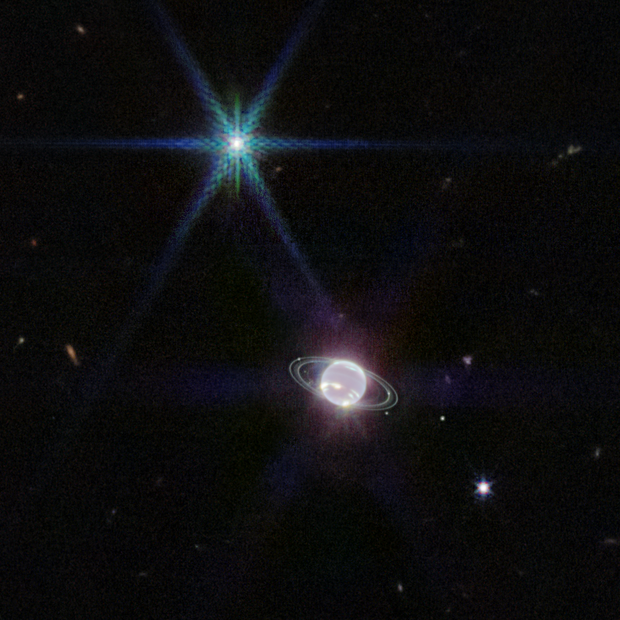