Warner Bros. Pictures - is an American film production and distribution studio owned by the WarnerMedia Studios & Networks Group. Headquartered at the Warner Bros. Studios complex in Burbank, California, it is the flagship label of the Warner Bros. Pictures Group division of Warner Bros. Entertainment, itself a division of AT&T's WarnerMedia. Founded in 1923 by Harry Warner, Albert Warner, Sam Warner, and Jack L. Warner, in addition to producing its own films, it handles filmmaking operations, theatrical distribution, marketing and promotion for films produced and released by other Warner Bros. labels, including Warner Bros. Animation, Warner Animation Group, New Line Cinema, DC Films, and Castle Rock Entertainment, as well as various third-party producers.

You've Got Mail is a 1998 American romantic comedy film directed by Nora Ephron and starring Tom Hanks and Meg Ryan. Inspired by the 1937 Hungarian play Parfumerie by Miklós László (which had earlier been adapted in 1940 as The Shop Around the Corner and in 1949 as In the Good Old Summertime),[it was co-written by Nora and Delia Ephron. It tells the story of two people in an online romance who are unaware they are also business rivals 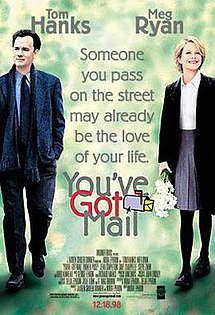 Robert Zemeckis (is an American film director, producer and screenwriter who is frequently credited as an innovator in visual effects. He first came to public attention in the 1980s as the director of Romancing the Stone and the science-fiction comedy Back to the Future film trilogy, as well as the live-action/animated comedy Who Framed Roger Rabbit. In the 1990s, he directed Death Becomes Her and then diversified into more dramatic fare, including 1994's Forrest Gump, for which he won an Academy Award for Best Director; the film itself won Best Picture. The films he has directed have ranged across a wide variety of genres, for both adults and families)

All Quiet on the Western Front is a 1930 American epic pre-Code anti-war film based on the 1929 Erich Maria Remarque novel of the same name. Directed by Lewis Milestone, it stars Louis Wolheim, Lew Ayres, John Wray, Arnold Lucy and Ben Alexander. The film was the first to win the Academy Awards for both Outstanding Production and Best Director. 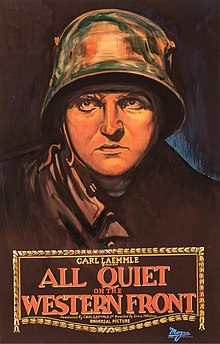 Bullet Time (is a visual effect or visual impression of detaching the time and space of a camera from those of its visible subject. It is a depth enhanced simulation of variable-speed action and performance found in films, broadcast advertisements, and realtime graphics within video games and other special media. It is characterized both by its extreme transformation of time and space. This is almost impossible with conventional slow motion, as the physical camera would have to move implausibly fast; the concept implies that only a "virtual camera", often illustrated within the confines of a computer-generated environment such as a virtual world or virtual reality, would be capable of "filming" bullet-time types of moments. Technical and historical variations of this effect have been referred to as time slicing, view morphing, temps mort and virtual cinematography)

A camera dolly is a wheeled cart or similar device used in filmmaking and television production to create smooth horizontal camera movements. The camera is mounted to the dolly and the camera operator and focus puller or camera assistant usually ride on the dolly to push the dolly back and forth. The camera dolly is generally used to produce images which involve moving the camera toward or away from a subject while a take is being recorded, a technique known as a "dolly shot." The dolly grip is the dedicated technician trained to operate the dolly by manually pushing it back and forth.

Donald's Nephews (1938) is a Donald Duck animated cartoon which features Donald being visited by his three nephews, Huey, Dewey, and Louie.This cartoon is Huey, Dewey, and Louie's first appearance in animation. The short, and the three nephews, was the idea of Al Taliaferro, the artist for the Silly Symphony comic strip, which featured Donald Duck. 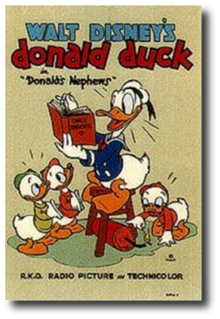 Epic Films (are a style of filmmaking with large scale, sweeping scope, and spectacle. The usage of the term has shifted over time, sometimes designating a film genre and at other times simply synonymous with big-budget filmmaking. Like epics in the classical literary sense it is often focused on a heroic character. An epic's ambitious nature helps to set it apart from other types of film such as the period piece or adventure film. Examples: Ben-Hur (1959), Titanic (1997), or Patton (1970))