Can a robot clean a plane?   The Newsy You: News of Today 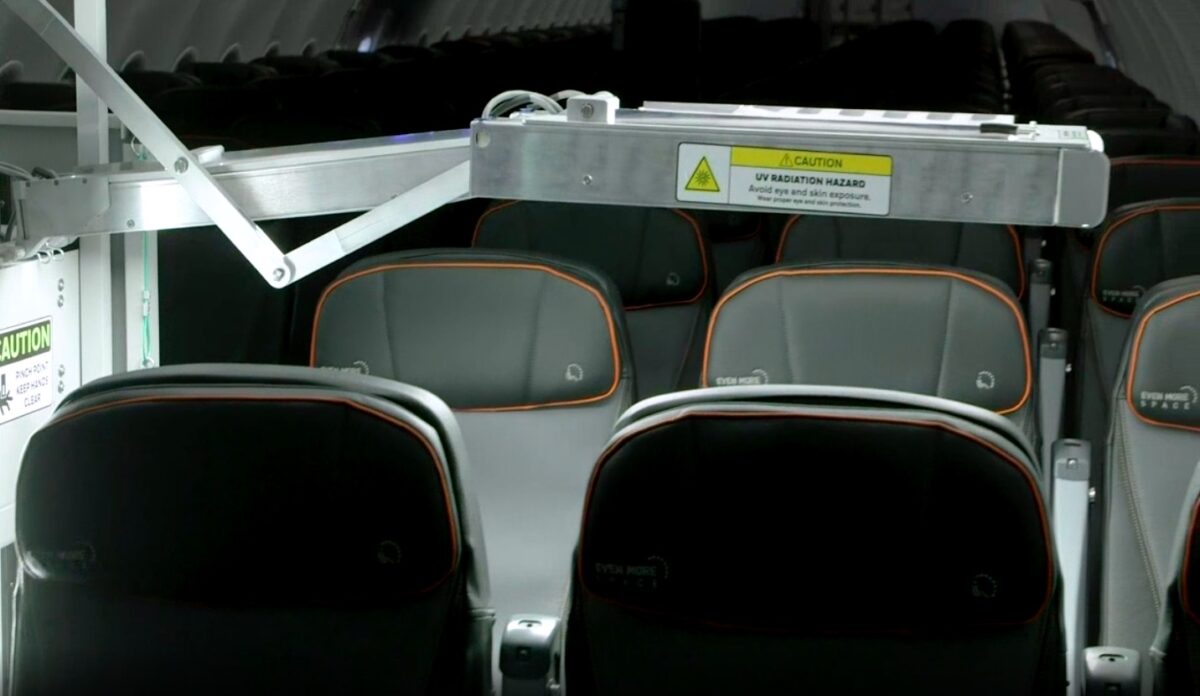 JetBlue has a new program testing a robot that rolls down airplane aisles, shining a disinfecting ultraviolet light to kill coronaviruses and other germs.

I wish articles about these germicidal / anti-viral ultraviolet devices would state the actual emission wavelength. Geek minds want to know, but most reporters understand about as much of the physics of electromagnetic radiation as the average 17th century farmer.

The article doesn't state the wavelength directly, but evidently it is the cheaper and more readily available 253.7 nanometer mercury vapor line in the near UV-C spectrum, rather than the more expensive to build 207 to 222 nanometer far UV-C spectrum which due to shallow penetration of human skin and the wet layer of human eyes, doesn't burn.

While ultraviolet light, specifically the short-wave UV-C type, has been shown to have a germicidal effect, it also poses potential health and safety risks, including skin damage like burns and premature aging and increased cancer risk. UV-C light in particular poses a risk of eye pain and damage in conditions like snow blindness or welder’s eye.

Excimer lamps are the ones that emit between 207 and 222 nanometers, and those could be serious game changers if the costs can be reduced and production volume significantly increased.

Some mercury vapor lamps also can emit the 185 nm mercury vapor line, which produces copious amounts of ozone. This highly corrosive gas also has germicidal properties. The main use of these special lamps are in water purification applications, as the ozone is far less toxic than chlorine, and kills a lot of pathogens before breaking down into free oxygen which then finally recombines into O2.

I know that the lamp I acquired about 30 years ago to erase EPROMs definitely produces ozone because I can smell it whenever it's in operation. So it probably does emit 185 nanometer energy as well, at least for a couple of feet before the air absorbs most of those high energy photons.

0
ReplyToggle Dropdown
Msg 4 of 36 to Showtalkshowtalk
In reply toRe: msg 1

I don't think any cleaning works 100% of the time except our own. Paid employees may be having a bad day or want a raise and not do things as thorough as they should. For that reason I do not use the city bus and I carry my own Lysol into.public restrooms.
0
ReplyToggle Dropdown
Msg 5 of 36 to $1,661.87 in cats (ROCKETMAN_S)ROCKETMAN_S
In reply toRe: msg 3

It must work and be feasible. I hope it does work.

0
ReplyToggle Dropdown
Msg 6 of 36 to kizmet1kizmet1
In reply toRe: msg 4

Things seem cleaner though. You can smell disinfectant.

0
ReplyToggle Dropdown
Msg 7 of 36 to Showtalkshowtalk
In reply toRe: msg 6

If I accidentally knock over a gallon of bleach, I can smell it, too. It doesn't mean the walls and ceiling are as clean as the floor.
0
ReplyToggle Dropdown
Msg 8 of 36 to Showtalkshowtalk
In reply toRe: msg 5

I saw a similar looking device at a WalMart a few weeks ago.

At least I think that's what it was doing - irradiating stuff in the shelves. Either that or it was scanning bar codes to map physical inventory locations. It emitted no visible light from its many portals on its tall dorsal fin that went all the way to the top of the highest shelf.

0
ReplyToggle Dropdown
Msg 9 of 36 to kizmet1kizmet1
In reply toRe: msg 7

Are cleaners dropping disinfectant on the floor?  Well, maybe.

0
ReplyToggle Dropdown
Msg 10 of 36 to Showtalkshowtalk
In reply toRe: msg 9

I don't know. I only know to avoid the regular bus lines. The homeless ride them from one end to the other, looking for places to get food, shelter and meet up with friends. Some are very clean (weekly church showers available) but some look like they slept in a cardboard box (many do).
0
ReplyToggle Dropdown
Keep Reading
TOP
Copyright © 2020 Delphi Forums LLC