NBC won’t air Golden Globes in 2022 for lack of diversity   The Pleasure Seeking You: Entertainment & Sports

NBC won't air Golden Globes in 2022 for lack of diversity

Change Vote
They made the right decision
No one is interested in the awards except recipients
Awards shows in general are not interesting
Golden Globes should change their practices and become more diverse
NBC was wrong and should not fall for the propaganda
1-4 above
I don't know enough to make a decision
Other
VoteView Results
0
ReplyToggle Dropdown
Msg 2 of 10
In reply toRe: msg 1

Amid growing pressure on the Hollywood Foreign Press Association, NBC said Monday that it will not air the Golden Globes in 2022.

Voted 3, I don't care about award shows but I do think the diversity issue is an interesting one, it's been a complaint about the Oscars for some time as well.

0
ReplyToggle Dropdown
Msg 4 of 10 to Showtalkshowtalk
In reply toRe: msg 1

I voted Other: Who cares what they do?

I never really liked the Emmy's, Grammy's, Golden Globe or any other celebrity award ceremony.

And for the past several years now, they've become so politicized that I despise anything they do and/or stand for.

They're a majority of rich liberals who often make political statements gloating over who's the best this year! (* ROFLMAO *)

0
ReplyToggle Dropdown
Msg 5 of 10 to Showtalkshowtalk
In reply toRe: msg 1

It's insane.  Who cares about diversity?  Only idiots do.  Whoever is the best, regardless of their color or gender, should win.

And it's right on the mark too!

I hosted an Oscars chat for years. When I started, I was seeing a  lot of movies so it made sense. The last few years I haven’t seen any and suddenly the shows were ridiculously boring.  But I didn’t watch the GG.

Not just politics, but often so inside an ordinary person wouldn’t get the joke anyway.

Diversity is about making films that depict the country as it is and offer a variety of stories.  Diversity in the product makes sense.  The reason they want diversity in the people voting for the awards is because they don’t beleive white people (the GG board is all white) can appreciate or understand people of color in projects or ability.  Which in itself insane.  People of any race should be able to appreciate talent wherever it is.   But understand the appearance.

The one thing they never discuss, because it goes to the heart of the TV and film industry, is why so many white actors are Australian, British or even Canadian. Although a Canadian actor doesn’t have an accent to hide.  But U.S. actor apparently aren’t as talented as Australian. 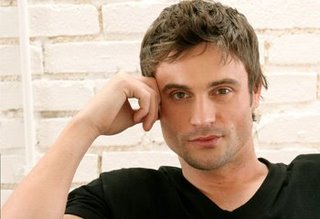 This is Daniel Goddard, born in Sydney in 1971, who appeared in Home and Away and Beastmaster in the mid-late nineties.These days Goddard plays Ethan 'Cane' Ashby in The Young and the Restless. Goddard is one of a number of Aussie actors who has made it on US or UK...