The dark side of today's leadership...

How well are you versed on the histor...

Politicians aside, most Americans want their votes to count and for candidates to win fairly.

0
ReplyToggle Dropdown
Msg 522 of 845 to Showtalkshowtalk
In reply toRe: msg 521

Yes, and thus everybody should be concerned about what happened in 2020. Regardless of whether it's overturned or not... all the fraud needs to be accounted for and laws set into place to ensure it never happens that way again.

That is consensus now among a majority that things aren’t right.  The polls are showing a huge trend.

0
ReplyToggle Dropdown
Msg 524 of 845 to Showtalkshowtalk
In reply toRe: msg 523

While yet more and more and more illegal activity is coming out all over the place... the same tactic, the same percentage occurring simultaneously in several states!!! It was rigged. You cannot come up with such statistics otherwise. 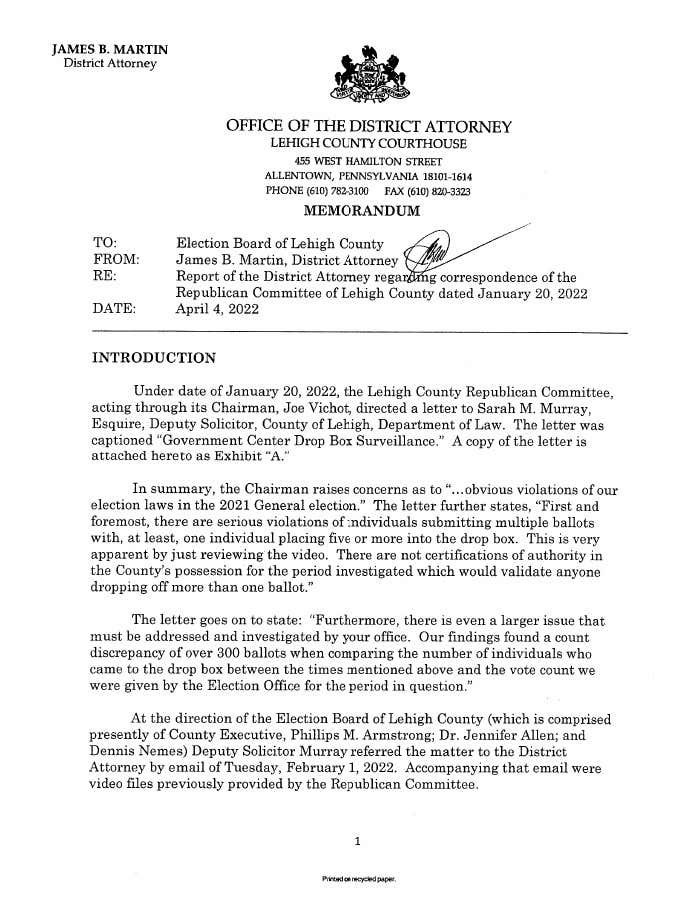 CONFIRMED: Investigations in Both Pennsylvania and Wisconsin Show 7% of Ballots Dropped in Drop Boxes in 2020 Election Were Illegally Harvested (thegatewaypundit.com)

The Wisconsin Supreme Court delivered a serious blow to Democrats after rejecting the left’s redistricting map and adopting one drawn up by Republicans for the state’s upcoming elections.
The state’s highest court made its decision last week after the U.S. Supreme Court in March threw out the voting map for state elective offices drawn up by Wisconsin Democrat Governor Tony Evers.
With its 4-3 decision Friday, the state court issued its ruling so late that state Democrats will likely not have have time to try and fight the implementation of the Republican-crafted districting plan for the 2022 midterms, according to the Milwaukee Journal-Sentinel.
Gov. Evers called the court’s ruling an “outrageous” and “unconscionable miscarriage of justice,” and went on to hyperbolically claim that “our democracy is under near-constant attack.” The court’s decision is actually a defense of democracy under the law.
While it seems a lock that the GOP voting plan will be used for the 2022 elections, the state Democrats are still mulling continued court challenges against the redistricting map for 2024, according to the Journal-Sentinel.
Despite apparently being stuck with the maps for 2022, the Democrats still claim that the GOP-created map violates the federal Voting Rights Act.
The argument started after Evers released his plan. State Republicans had objected to the governor’s map because it increased Milwaukee’s black-majority districts from six to seven, even though the city’s black population did not grow to justify adding a district, the Journal-Sentinel reported.
Meanwhile, the new map approved by the courts goes in the opposite direction by reducing the black-majority districts in Milwaukee from six to five.
In the end, the state’s high court said that Evers failed to prove his case.
“The Governor did not present evidence of a (Voting Rights Act) violation, despite drawing maps on the basis of race. He produced no evidence of electoral history and no district-specific evidence demonstrating that the black communities he moved among districts would be denied the opportunity to effectively participate in democracy absent his proposed district lines,” Chief Justice Annette Ziegler wrote in the court’s decision, the Journal-Sentinel added.
Wisconsin Supreme Court Justice Jill Karofsky, writing for its minority, claimed that arbitrarily increasing the black districts in Milwaukee was justifiable based on the city’s purported “history of forced segregation” that reduced the political influence of blacks in Wisconsin. Neither the court’s majority, nor the U.S. Supreme Court agreed with that assertion.
Indeed, Milwaukee was a focal point for suspected manipulation in the 2020 election. Milwaukee and the surrounding areas, including Racine and Kenosha, were the recipients of more than $8 million in grants issued by leftist Facebook chief Mark Zuckerburg for the 2020 election cycle. The grants were described as “an election bribery scheme under Wisconsin law,” according to a report by special counsel Michael Gableman.
“And by targeting important jurisdictions with large Democrat vote potential with greater financial resources, opportunities were given to some voters that weren’t made available to all Wisconsin voters,” Gableman exclaimed.
It was also alleged that several Milwaukee officials took “Zuck Bucks” as bribes during 2020.
The Thomas More Society, a conservative law firm based in Chicago, alleged that former Milwaukee Mayor Tom Barrett and City Clerk Jim Owczarski sought $3.4 million for a get-out-the-vote scheme to increase absentee balloting in their jurisdiction.
There were numerous other problems with the 2020 election in the Badger State, too.
For instance, the margin of victory for Biden over Trump dwarfed the 2016 results of Trump versus Democratic candidate Hillary Clinton.
“Vice President Joe Biden carried [Milwaukee’s districts] in 2020 with 3,768 votes to President Donald Trump’s 2,883— a margin of 885, or eight times what it was in 2016, when Trump earned 1,904 votes to Hillary Clinton
...[Message truncated]
View Full Message
0
ReplyToggle Dropdown
Msg 526 of 845 to WALTER784WALTER784
In reply toRe: msg 525

Any one of those could have changed elections results, either president or state offices.

0
ReplyToggle Dropdown
Msg 527 of 845 to Showtalkshowtalk
In reply toRe: msg 526

Yep... and now this movie is coming out in May using actual live footage of all the corruption and voter fraud going on in 2020...

2000 MULES, which documents massive voter fraud across many states, using runners (mules) to drop countless ballots into vast numbers of drop boxes. The film is about to be released so watch this short but powerful trailer at this link: 2000 Mules Trailer - Rumble

They don’t like him, so they will trash his movie.  I never see political movies.

0
ReplyToggle Dropdown
Msg 529 of 845 to Showtalkshowtalk
In reply toRe: msg 528

Some may call that political, but I call it documented evidence of a fraudulent election.

As for them attempting to trash the movie... LOL

Well, they seem to go after, dox, attack and attempt to smear anybody who does not fit their agenda... and it's becoming more and more absurd with liberal news media and big tech in on the Democrats scheme to smear people.

This videoclip shows you just how ludicrous and absurdly unbelievable the extent which they will go to in an attempt to destroy somebody.

Tucker: This is an intimidation campaign against 'Libs of TikTok'