Kimmel is extremely sensitive for a comedian. 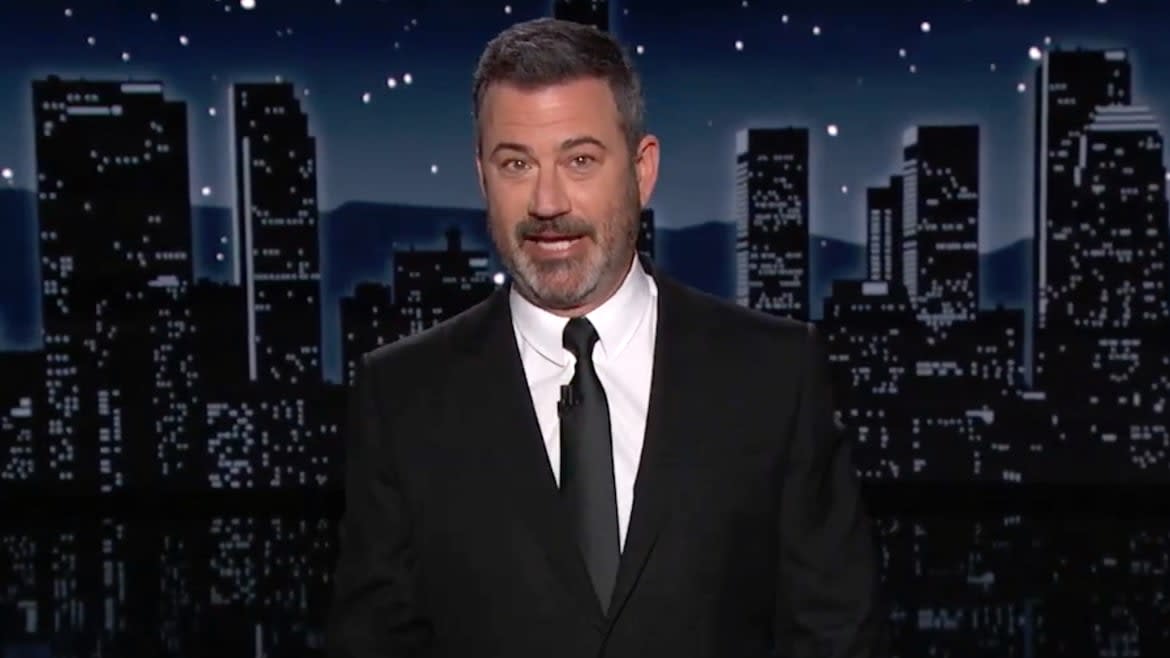 ABCPresident Joe Biden has not yet made his planned appearance this week on Jimmy Kimmel Live!, but that hasn't stopped Fox News from kicking its outrage cycle into gear.All day Monday, various Fox pundits complained that by appearing on a late-night comedy show, Biden is not taking his presidency seriously enough. Fox & Friends host Brian Kilmeade predicted Kimmel would go too soft on the...

Kimmel is extremely sensitive for a comedian.

Now that's funnier than anything he said! (* CHUCKLE *)

There is nothing funny about Kimmel.  The only thing he represents is anti-American, anti-humanity, a total script reading leftist.  Or libtard as we like to call them.

He needs to rethink.

Why would one sue a voter integrity group? Let the audit complete... unless of course, you have something to hide...

In a stunning revelation, legal documents show Oregon elections officials have inadvertently admitted that voting systems are vulnerable to attacks even when not connected to networks. This comes via the confusing legal mess that voter integrity organization Clean Voter Rolls has found themselves in, thanks to their simple request to examine the ballots from the 2020 election.
Clean Voter Rolls made a public records request of Washington County elections, led by Elections Manager, Mickie Kawai. The county, just west of Portland, initially denied the request, but the district attorney overturned the denial and ordered the disclosure of the ballots.
Then the county sued the individual requestor, Tim Sippel, to stop the disclosure of the ballots. Soon the Secretary Of State’s office and Department Of Justice intervened on behalf of the county. Countless dollars are now being spent by government entities to stop the public from seeing the ballots. One man is now dealing with the full brunt of the state government coming after him.
Secretary of State Shemia Fagan sought a restraining order against Sippel to forbid him from sharing the data he already has. The order was granted and has been extended.
The state and county are arguing that simply showing the ballot images from the election could somehow compromise the computer systems, and that’s why they shouldn’t have to show the ballots to the public. “Even when systems are not directly connected to networks, they are vulnerable to attack through physical or wireless access,” argues state Attorney General Ellen Rosenblum in her motions, while also saying “If the Court enters a judgment requiring the release of the ClearBallot database, that judgment would compromise the security of the election systems used in 15 Oregon counties.”
This seems to contradict everything we’ve been told about the 2020 election and the computer systems, which dozens of elections directors and officials told us were not connected to the internet and thus couldn’t possibly be hacked.
In the state’s initial complaint, they specify “Disclosure of the internal components of the voting system, such as the SQL database architecture, can allow for malicious actors to identify additional ways to attack the elections system and compromise Washington County’s elections infrastructure specifically, and Oregon elections infrastructure more broadly. Further, such a disclosure creates risks to elections infrastructure to any jurisdiction nationally using this system.”
All of the case documents can be found at this Dropbox link. You’ll note that the state does not specify how exactly showing the ballot images from 2020 creates this security risk, they just make vague references.
The latest press release from Clean Voter Rolls reads:
Through a public records request, Tim Sippel sought the ballot database for a public test of the Washington County election system. The County denied the request. The Washington County District Attorney then ordered the County to produce the database. In response, Washington County filed a lawsuit in the Washington County Circuit Court seeking a declaration that it does not have to produce the database. The Oregon Secretary of State has now intervened, joining the case against Mr. Sippel.
Through a separate public records request, Janice Dysinger of Clean Voter Rolls, sought among other things the ballot images from the November 2020 Election. Among the documents provided by the County was a backup of the database for the November 2020 Election, which the county contends it did not intend to produce.
When Washington County learned that Mr. Sippel had the copy of the 2020 Election Database produced by Washington County, they sought and were granted a temporary restraining order (TRO) preventing Mr. Sippel from copying or disseminating the database. Washington County and Oregon claimed that it would be irreparably harmed if Mr. Sippel distributed the database because it would present some unspecified security risk to the election system in Washington County and 14 other Oregon counties.
The parties have proposed a trial date of June 21 and 23, 2022. In the meantime, the parties have agreed to extend the TRO for another 10 days and to negotiate a protective order so that experts for Mr. Sippel can have access to the database for the purpose of rebutting Washington County’s case.
Mr. Sippel contends the ballot database is a public record, he is entitled to possess it, and that the County has no grounds to contend that dissemination of the database to the public would be a security risk.
In a world where organized criminal activity occurred during the 2020 election to inject a vast number of counterfeit ballots to the election systems in multiple states, as demonstrated by the recent movie 2000 Mules, it is extremely important that Washington County make public the 2020 Election Database. The fact that Washington County is fighting as hard as it can to hide this information from the public raises the question: What are they hiding?
You can contact the Washington County elections manager, Mickie Kawai, at (503) 846-5800. Perhaps you can make your own records request.
Secretary of State Shemia Fagan can be reached at 503-986-1523.
State Attorney General Ellen Rosenblum can be reached at 503-378-6002.
...[Message truncated]
View Full Message
0
ReplyToggle Dropdown
Msg 722 of 1045
In reply toRe: msg 721

The Otero County Commission had a long day of discussions and reports today and then they landed upon the issues with the 2020 Election.  They voted to eliminate voting machines in the county!
TGP reported this morning on today’s petition to eliminate using voting machines in the county.
After a day of discussions, the Otero Commission voted on the three following items.
The commission voted to pass all three of the above motions.
These commissioners were fearless.  The more flack they got the more they knew they were over the target.  They wanted every legal vote to count.
“We do all want the same thing.  We all want a fair election”
“If we don’t find out what’s going on, we’ll never know.”
Wow, these commissioners were great.
Here is the actual vote by the commissioners: Video in link below:
Here is the full day’s presentation – this discussion occurred at the end of the day: Video in link below:
Major hat tips to Attorney David Clements and his wife Erin Clements and all those in New Mexico who helped make free and fair elections a thing of the future in this county.

The Gateway Pundit previously reported on how 14 states were significantly miscounted in the 2020 census.
Out of the states that were undercounted, most of them were red states.
Out of the states that were overcounted, most of them were blue states.
According to analysis, the inaccurate counting cost Florida and Texas one house seat each — for the next 10 years!
Breakdown by state:
Hawaii: overcounted by 6.8%
Delaware: overcounted by 5.5%
Rhode Island: overcounted by 5.1%
Minnesota: overcounted by 3.8%
New York: overcounted by 3.4%
Utah: overcounted by 2.6%
Massachusetts: overcounted by 2.2%
Ohio: overcounted by 1.5%
Arkansas: undercounted by 5%
Tennessee: undercounted by 4.8%
Mississippi: undercounted by 4.1%
Florida: undercounted by 3.5%
Illinois: undercounted by 2%
Texas: undercounted by 1.9%
The Wall Street Journal is now accusing the Democrats of rigging the Census. In an op-ed from the editorial board titled “Who rigged the Census?” the case is laid out that while the Democrats were accusing the Trump administration of rigging the Census. the Democrats’ actions led to mistakes that benefited blue states over red states.
They also called for an investigation if Republicans retake Congress.
The Wall Street Journal reported:
Well, well. Remember how Democrats accused the Trump Administration of trying to rig the 2020 Census? Now a Census Bureau study reveals that Republican-leaning states may have been hurt by mistaken under-counts.
…
But recall that progressives in autumn 2020 sued to kick the reapportionment into the Biden Administration. By law the Census was supposed to be complete by Dec. 31. Yet Democrats claimed that bureaucrats needed more time to do post-survey accuracy checks. They got their way. Whatever accuracy checks the bureau used, they evidently failed.
This week’s report notes that over-counts were partly due to people or census workers filling out duplicate surveys. For households that didn’t respond to the survey, bureaucrats imputed how many people live at an address using other government data such as welfare benefits or literally their best hunch. Surprise—they often guessed wrong.
…
If Republicans take control of the House, an oversight investigation into the Census seems warranted.
When people wonder how a Leftist like Pelosi can be in charge, it always comes down to tricks like this.