Should the U.S. move to a cashless society?

How many motor vehicle accidents have...   The Curious You: Beliefs and Ideas

How many motor vehicle accidents have you directly been involved in? (See next post for details.)

By [directly involved in], I'm referring to an accident where you were in one of the motor vehicles that crashed. It doesn't matter whether you were in the driver's seat, the passenger's seat, in the back seat, trunk or the back of a pickup or trailer truck. Regardless of whether you caused the accident or somebody else did... if you were in one of the vehicles that crashed... then count it. Even if you were in a multiple car pile up where somebody else crashed into you after you were stopped. And it doesn't matter whether your engine was running or not at the time of the crash either. (i.e. In the parking lot getting ready to start your engine when somebody plowed into the back or side of your car, etc.)

By motor vehicle, I'm referring to a motorcycle, car, truck (mini van up to an 18-wheeler), bus, boat/ship, airplane, jet ski or other motorized vehicle.

Edited to add: [And it doesn't matter whether it was a minor fender bender or major accident where you or somebody else were hospitalized.]

I voted 4, but it may be 5 or 6, as all but one were on the job (law enforcement). All but the one which was not on the job were other vehicles running into my squad car, usually when I was on a "lights and siren" run, as people usually also have their heads up their ass while driving. My one in my own vehicle was coming up over a rise in the road to be confronted with an accident that had already taken place and I couldn't stop in time.

Because you’re happened on the job it’s not like you could avoid them.  It’s different for someone who causes them vs being in the wrong place.

But they weren't all my fault but one definitely was when I was 17 and during heavy rain I got frustrated in not being able to see oncoming traffic to cross the road and finally just went and sure enough got hit.

I was a passenger in at least two accidents with teenage friends — one was a multiple rollover in the median at over 100MPH where I got thrown out of the back seat of a 2-door Chevy Nomad.

Most recently, Jan 2020, I T-boned a semi-trailer, luckily it was empty, at 70+ when it pulled in front of me across a highway while I was in my Ford 150 about 5am. My truck was totaled but I only ended up with glass scratches, mostly to my arm. Because the trailer was empty my truck was able to push it and thus lessened much of the impact.

The trailer was an empty dry bulk hauler similar to this and I hit it about 2/3 back with my front right headlight area. After it was over, next to me was the back passenger seat instead of the passenger front seat. 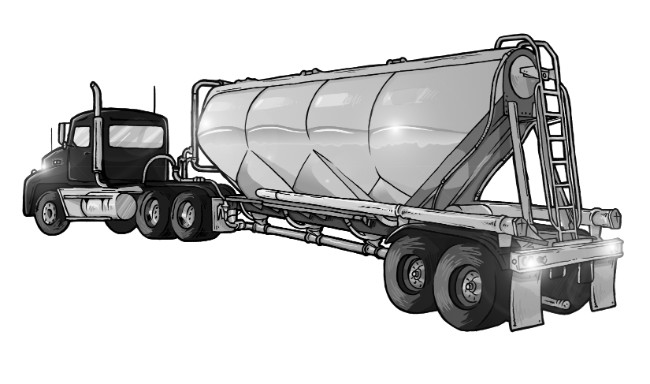 I guess high speed chases would inflate the number a bit.

Being as you were in law enforcement, you'll probably get a kick out of my 1st accident.

The cops in front of me heard the sound of the crash, looked in their rear view mirror, turned on their lights, made a U-turn and were on the scene in less than 1 minute. (* CHUCKLE *)

It was my first accident ever and so I was a bit scared (I only had my license for a little over a year), and the police man just told me, don't worry about a thing... The whole left side from front bumper all the way to the back bumper was indented almost one foot inward. The police and I looked at the bumper of my dad's F-150 truck and there was hardly anything but a small scratch, not even a real dent. (* LOL *)

The police vouched for me that the light was green and thus I didn't really have to say or do much at all. Luckily, my insurance didn't go up because it was totally her fault.

0
ReplyToggle Dropdown
Msg 8 of 37 to EdGlazeEdGlaze
In reply toRe: msg 5

multiple rollover in the median at over 100MPH where I got thrown out of the back seat of a 2-door Chevy Nomad.

You're lucky to be alive after that one.

T-boned a semi-trailer, luckily it was empty, at 70+

That's for sure... had that trailer been full, it wouldn't have budged and probably accordianed you between the steering wheel and the back of the front seat.

The only accident I caused was when I was 19, a little late for work, so I was driving over the speed limit swerving in and out of both of the lanes on my side. There was this street sweeper up ahead and so I swerved in the next lane to pass it when all of a sudden, this Torino has his left winkers on and his brakes applied waiting for oncoming traffic to pass before he made his turn. Well, the second I saw him, I slammed on my brakes, but it was too late and I rear ended him. And not only did I rear end him, but as he had his wheels turned left, his car was pushed into oncoming traffic from the other side of the road so he got clipped in both the front and back because of me. My car was totaled too because the chassis was pushed back more than 2 inches. Needless to say, I didn't make it to work that day and that's the last time I ever drove recklessly too.

Interesting side of the story is that the guy I rear-ended just so happened to be a cousin of mine... (* CHUCKLE *) and he didn't file any charges against me.

Well, luckily, neither of us were hurt... the woman was quite shook up. She didn't even realize that she had ran a red light.

And because the police were right there, they vouched for me so basically the only question I had to answer was "Are you OK!"... LOL... they took care of the rest.

I can recall four of them, two of which I was a driver.   Thankfully never injured.