Are you following Taibbi’s Twitter files? (SNP)   The Online You: Internet Life

Change Vote
Yes, I am following them as they are posted
Yes, I'm reading them when I have time
Yes, I'm reading summaries from other sources
Yes, I'm watching the news for information
Not yet but I plan to
No, I'm not interested
Other
VoteView Results
0
ReplyToggle Dropdown
Msg 2 of 27
In reply toRe: msg 1 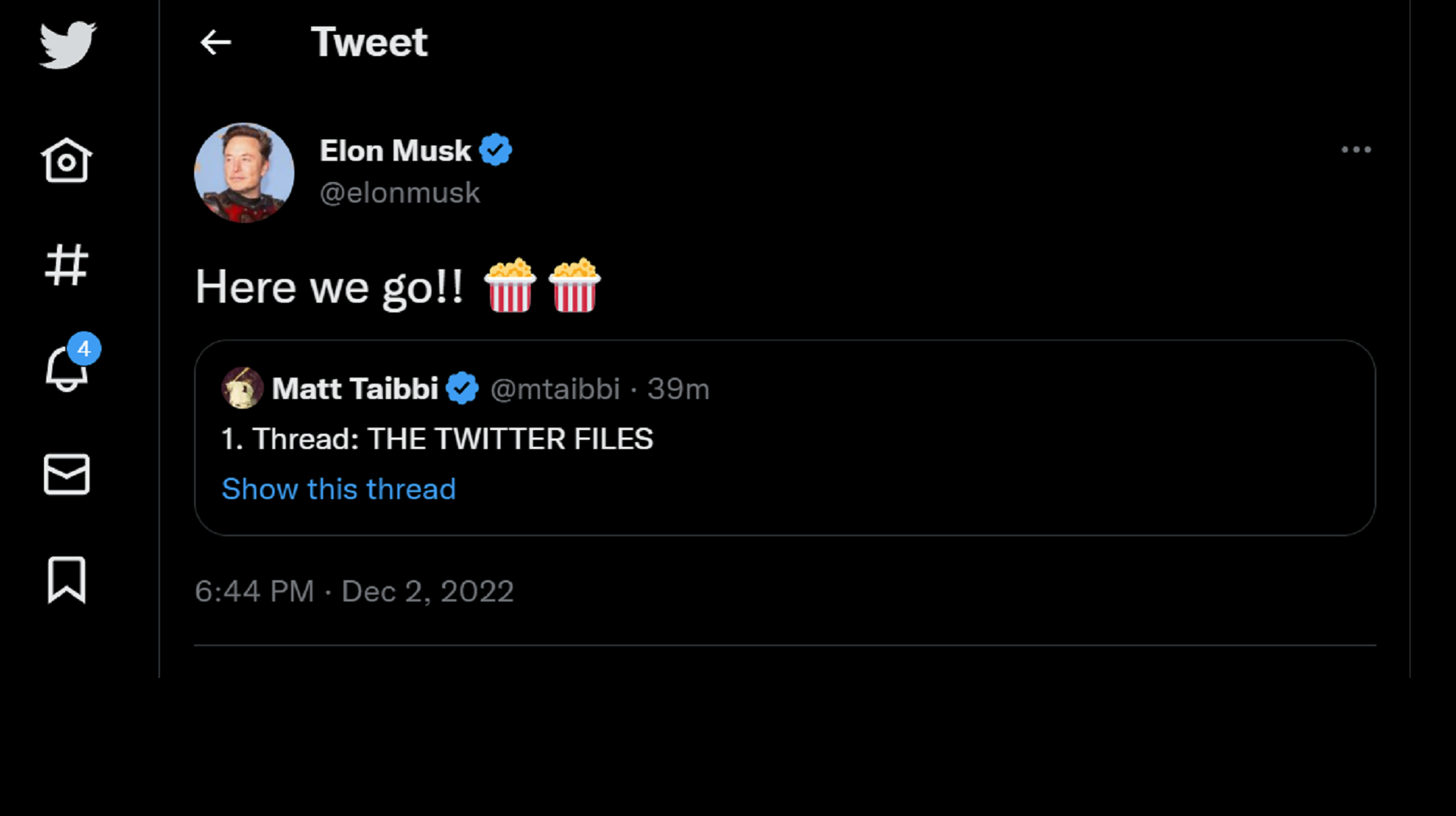 Elon Musk's Twitter is pulling back the moderation kimono tonight, with the first set of Twitter Files being posted by Matt Taibbi to the social platform.

You can follow the links without an account.  After so many scrolls it asks you to sign in.  I have an account used for a forum but I never connected and didn’t like it. At the time, it brought some traffic here.

0
ReplyToggle Dropdown
Msg 6 of 27 to Showtalkshowtalk
In reply toRe: msg 5

I have more than enough links to follow daily without adding more.

Personally, I don't care for their format.

I don’t like social media as I can rarely find what I want anyway. Only the most recent links.

0
ReplyToggle Dropdown
Msg 8 of 27 to Showtalkshowtalk
In reply toRe: msg 7

Tucker Carlson: 'Everybody in power is panicked over this'

'A country that censors is not a democracy'

Fox News host Tucker Carlson discussed the growing pressure campaign against Twitter owner Elon Musk’s effort to restore free speech on the site Monday.
“As in China, [if] social media in the United States are censored, that’s not compatible with democracy. You can’t have censorship in a democracy, a country that censors is not a democracy. Elon Musk, not from this country, knows that. He bought Twitter with the aim of stopping censorship and restoring free speech,” Carlson said. “He just said this. There’s been a lot of censorship on Twitter, and we’re going to find out what it is. ‘The Twitter files on free speech suppression, soon to be published on Twitter itself. The public deserves to know what happened.’ Why shouldn’t we know that? Why shouldn’t we know who is shutting down free speech in a country that claims to be a democracy?”
“Well, everybody in power is panicked over this. Apple is threatening to remove Twitter from its app store,” Carlson continued. “So if Twitter can no longer get its app on the app store, there’s no more Twitter, because you access Twitter through the app. So they’re essentially threatening to shut down Twitter. Meanwhile, the White House and the media are trying to convince you that the problem is not China throwing people into concentration camps, suppressing free speech, the problem is Elon Musk, who is trying to restore free speech.”
WATCH:
Since Musk took over the social media platform, he has reinstated a number of Twitter accounts, including that of former President Donald Trump, The Babylon Bee and Rep. Marjorie Taylor-Greene.
Musk announced a general amnesty for most banned accounts Thursday after a second poll in which 72.4% of those who voted backed the proposal. Since Musk’s takeover of Twitter, multiple advertisers paused spending, while Democratic senators pushed for a Federal Trade Commission investigation into the social media site.
Carlson played video clips of liberals criticizing Musk’s actions with Twitter, including White House press secretary Karine Jean-Pierre. Musk also called out Apple CEO Tim Cook, claiming that Apple threatened to remove Twitter from its App Store.
“Here’s the CIA officer, the guy who lied for a living, telling you we need more censorship, but they’re not coming out against, quote, ‘hate,’ Carlson said. “What they’re saying is we decide what you can say and what you can’t in this democracy. If you try to speak freely, we’ll crush you. That’s exactly what they’re saying.”

Tucker Carlson: 'Everybody in power is panicked over this' (wnd.com)

I agree with everything Tucker is explaining.  I however think, Musk needs to make his own app store.  There are a lot of news agencies that had their apps removed, because they believe in Freedom, the Amendments and the Constitution.  They spoke the truth to the best of their knowledge, most of it was the truth.  He has the money, and many will go to him for their apps, not google, or wherever you get them from, if he will do this.

They wouldn’t have to worry if they hadn’t broke the law. What did they expect would happen when it was discovered? It’s not like it was all that well hidden. We all knew it was happening.