Poor RNC can't win   The Serious You: How Current Events Affect You

I am far less tolerant of the mistakes my side makes than I am of the screwups by the other side.  I figure the other side simply can't help themselves.  I've always been impatient with my own mistakes, as I think most of us are, so I should be equally as impatient when my side does something dumb.  Don't you feel that way about your side?

My wife is delighted that Queen Elizabeth never looks before she sits down.  Someone is responsible for making sure the chair is in place.

0
ReplyToggle Dropdown
Msg 33 of 149 to MerlinsDadMerlinsDad
In reply toRe: msg 31

No, I try to be open minded until someone really goofs.
I started life as a 4th generation Democrat. It was when people were basking in the glow of Roosevelt and Truman but were still proud of a true military veteran being in charge. Of course, I could only read pictures then. JFK had a pretty wife who rode horses and had two cute children. In real life he was a scoundrel with a long list of things done in private that were disgusting but his family kept them secret. Of course, you know all that. LBJ also did disgusting things in private but they were hidden, too. We have had many POTUS who did bad things in private but good fir the nation. The odd thingvis we had Ford, a nan with many years of experience and a son who was an Episcopal priest but we chose Jimmy Who? A man with very little experience who went to an all white church. His son sat on the roof of the White House smoking pot. Pot was illegal then. Reagan was a breath of fresh air but divorced. Hus wife
0
ReplyToggle Dropdown
Msg 34 of 149 to MerlinsDadMerlinsDad
In reply toRe: msg 24

You identify it as damage where others seem to be happy at their decisions.  I heard today his support is as high as ever among likely voters.

0
ReplyToggle Dropdown
Msg 35 of 149 to MerlinsDadMerlinsDad
In reply toRe: msg 26

That could be why he isn’t shown wearing one.  I saw a camera view of a press conference looking out at the audience and the room was nearly empty. Reporters were far apart from each other and there was a camera and operator and that was it, other than his bodyguards

0
ReplyToggle Dropdown
Msg 36 of 149 to Showtalkshowtalk
In reply toRe: msg 35

And that tepid endorsement could have a positive effect on some of those who aren't wearing masks.  Let's hope so.

0
ReplyToggle Dropdown
Msg 37 of 149 to MerlinsDadMerlinsDad
In reply toRe: msg 36

I don’t think of politicians as role models. They aren’t for me.

0
ReplyToggle Dropdown
Msg 38 of 149 to Showtalkshowtalk
In reply toRe: msg 34

showtalk says:  "I heard today his support is as high as ever among likely voters."

Yeah. his numbers haven't moved much since he took office 1258 days ago.

In the presidential contest, Donald Trump faces a 10 percentage point deficit in his race against Joe Biden: 54% of registered voters say if the election were held today, they would support Biden or lean toward voting for him, while 44% support Trump or lean toward supporting him. 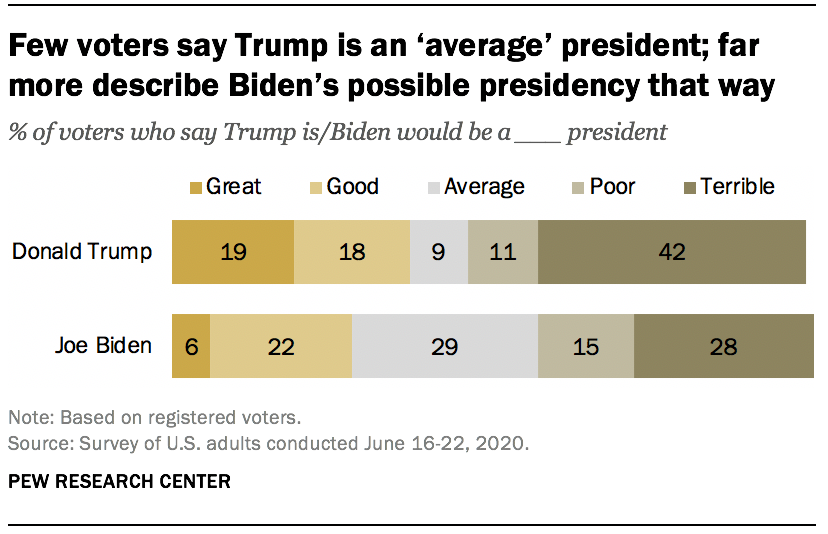 As has been the case throughout his presidency, and even during his successful campaign for the White House four years ago, Trump continues to engender strong loyalty – and intense opposition. About three-quarters of registered voters who support Trump (76%) say they view their presidential ballot primarily as a vote for the president. By comparison, only 33% of Biden voters view their vote more as an expression of support for him; about twice as many (67%) view it as vote against Trump [bolding mine --MD] https://www.people-press.org/2020/06/30/publics-mood-turns-grim-trump-trails-biden-on-most-personal-traits-major-issues/

0
ReplyToggle Dropdown
Msg 39 of 149 to Showtalkshowtalk
In reply toRe: msg 37

As I've said before, you're a special person.  A lot of people do, which is why effective leadership is so important to so many Americans.

You have a list and certainly seem negatively predisposed against some of our previous presidents.