is Dechambeau the future of golf?   Golf talk

Every other day workouts and a de-load week to recover then I started over again.

0
ReplyToggle Dropdown
Msg 46 of 56 to NineMileSkidNineMileSkid
In reply toRe: msg 43

I think you are reading waaaay to much into the protein shake thing.  Just because he drinks a lot of them - doesn't mean he's attributing any special powers of recovery or extra strength gained to them.  His only goal is to maintain a 2 to 1 carb to protein ratio - so maybe that's why all the drinks?  Else, maybe I missed an interview?

Also, what you consider to be "serious" strength training doesn't necessarily coincide with what Bryson is doing.  Though he certainly seems serious about increasing his strength.  Does that alone make it "serious strength training"?

From what I've been able to find - it's predominantly core workouts.  "His gym inspiration is to stave off a nagging back injury. That injury — which DeChambeau says stems from a childhood trampoline accident plus the wear of hitting nearly infinite range balls — left him in major pain last season."

I know he says he doesn't bench, or do squats … so "not serious"?  The explanation online is:  "He’s been focusing on exercises that get him into “extreme positions of rotations and flexions” at which point he adds weight to build mental and physical tolerance in those positions".  There's quite a bit of info online about the Muscle Activation Technique and the isolation exercises.

Nothing he's accomplished so far is not easily explained by hard work and determination (and youth). 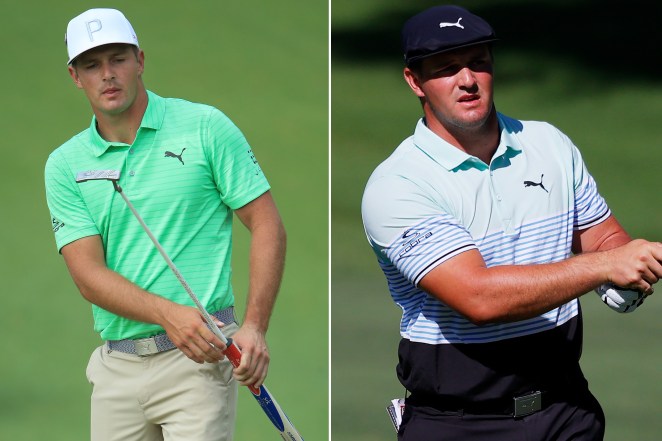 His head looks bigger, too.

I think that thick neck makes his head look  bigger

He showed some roid rage to a couple of officials at the Memorial.
0
ReplyToggle Dropdown
Msg 50 of 56 to Tom0956iTom0956i
In reply toRe: msg 42

Doesn't look too fat to me

A bigger head will help build those neck muscles.  8o)

So doesn't the Puma emblem ...

on TV, to me, he looks kinda' fleshy in addition to obvious increase in muscle mass

He showed some roid rage to a couple of officials at the Memorial.