My next iron project...restoring old Macs

Wooden dowels for irons...anyone done it

For all the Nattering Nabobs

Limbaugh not doing so well

Groups Trump Will Improve With In 2020

An alarming scientific report compiled by British researchers and shared with the Trump White House warns that, in the absence of drastic and coordinated government action, the novel coronavirus could kill as many as 2.2 million people in the United States alone.

A much more targeted approach would have achieved the same or better health impacts with only a modest negative impact on the economy.

Trump should have named you Pandemic Czar.

Or at least listen to me and others with similar views instead of the so-called experts who have been wrong about pretty much everything. He should have listened to Rand Paul who just tore Fauci a new one during a Senate hearing.

Could you elaborate on what this targeted approach would have entailed?

I have done that a bunch of times.

From back in March:

What I wrote back in March on this forum and submitted as an editorial to the San Diego Union Tribune (that was "considered" but never published) stands true. Is this the right COVID-19 response? One of the central themes of our current response to COVID-19 (CV) is we have to ramp up testing and make many millions of test kits readily available. We are told only people showing symptoms of respiratory illness should be tested. But we are also told people showing no symptoms can spread CV. If you show symptoms of any respiratory illness, you should isolate yourself, especially during an outbreak like CV. At this time, we want to minimize any spread of CV, the flu, and any respiratory ailment, including the common cold. So why the need to test everybody with symptoms? Just have them isolate for a few weeks. If you start to get severe symptoms, see a doctor and get tested. If you have symptoms assume it is CV and isolate. Take appropriate measures if your symptoms start getting much worse. It seems any need for a massive level of testing should be for people not showing symptoms, since they are capable of spreading CV. But administering hundreds of millions of tests is not feasible, at least not now and not quickly. That is why social distancing has been mandated by the government at every level. A mandate that has done severe damage to the economy and has totally disrupted society at every level. And has set a very bad precedent for a virus like CV that is not a very serious health issue outside of a relatively small segment of the population vulnerable to severe symptoms. I am not sure there is any good answer for how to respond to a similar event in the future, at least along the lines of our current response. Highly simplified tests with quick results are being developed, which are very helpful for identifying infected people at the point of care. But even these tests are probably not practical for the population as a whole. The current knee-jerk reaction to do massive testing does not seem to address the key factor that forces government-mandated social distancing and its massive economic and societal impacts. What if we test 10 or 20 million people showing some symptoms? What if some of them have CV? They all should isolate anyway. In my opinion, the best response is (1) to social distance the most vulnerable to severe symptoms, (2) take appropriate measures for travel bans from hot spots, (3) strengthen border security, and (4) keep the rest of things going as normal as possible. We have addressed the middle two elements. But the other two elements are by far the most important for addressing the highly crippling impacts we have been experiencing as the result of government-mandated social distancing. It would be much easier to social distance the much smaller population of the most vulnerable than social distance the masses. And the most vulnerable tend to naturally social distance themselves when risks are elevated from the flu or another virus like CV. Social distancing of the masses needs to be limited to things that are much more deadly to a much broader segment of the population. Something we have never experienced. President Trump has said his administration “fixed the system” for responses to viral outbreaks. The fix to the system for a virus like this is to replace social distancing of the masses with social distancing of those most vulnerable to severe symptoms, while eliminating any outside influx of infected people. This will minimize any impacts on normal life and the economy. But the current response addresses none of that. The next time this happens the only thing different will be we have protective equipment and medical stockpiles to make treatment go smoother. Nothing is being done to eliminate the need for government mandates for social distancing. That question is not even being asked.

Thank you. I'm not around here everyday...most days I am though. I just missed this the first time.

And that was before I started ranting about why the paper and cloth masks that the vast majority of people are wearing don't work for COVID and other viruses. 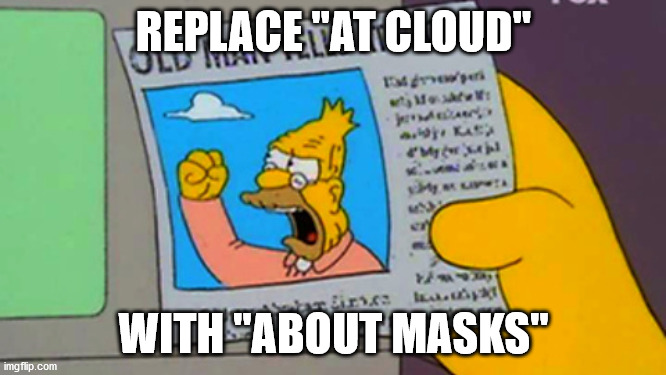